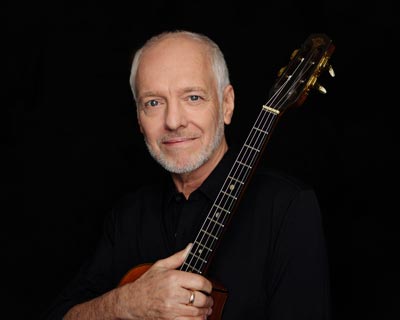 (ENGLEWOOD, NJ) -- Following his summer co-headlining run with American rock legends Cheap Trick, Peter Frampton is back on the road, this time performing an acoustic only set for the first time ever.  He'll bring his: Peter Frampton Raw: An Acoustic Tour to Bergen Performing Arts Center (BergenPAC) on Sunday, October 11, 2015 at 7PM.   Tickets range from $39 - $119.

Gordon Kennedy, Frampton’s longtime collaborator and co-producer of his Grammy Award-winning album Fingerprints, will join him on tour as well as an added special guest, Frampton’s son, singer and guitarist Julian Frampton.

Peter Frampton remains one of the most celebrated artists and guitarists in rock history. At 16, he was lead singer and guitarist for British band the Herd. At 18, he co-founded one of the first super groups, seminal rock act Humble Pie. His session work includes collaborations with such legendary artists as George Harrison, Harry Nilsson, David Bowie, Jerry Lee Lewis, Ringo Starr, John Entwistle and many others. His fifth solo album, the electrifying Frampton Comes Alive!, is one of the top-selling live records of all time.

Peter notes, “This is a first for me and I’m very excited about doing a whole show acoustically. I couldn’t do it without the help of, my writing partner of 15 years, Gordon Kennedy who will be joining me for these shows. I see this show being ‘me’ performing the songs just as I wrote them on acoustic guitar or piano. I have done a lot of shows including 2 or 3 acoustic solo pieces and always enjoy the way it draws the audience and myself closer together.”

Julian adds, “I couldn’t be more ecstatic about the opportunity to support a legend while simultaneously spending time with family. Two birds, one stone.”