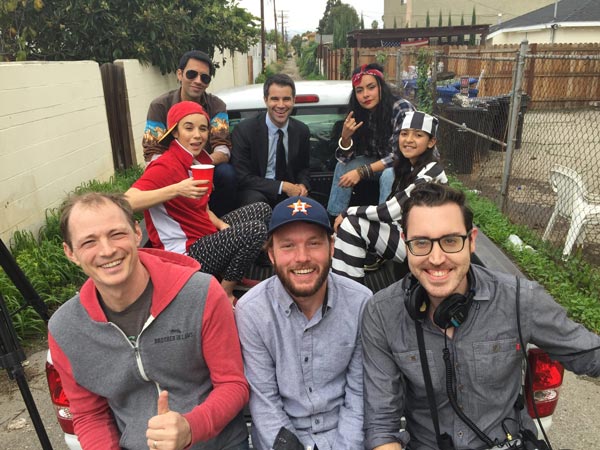 Bad Hombres Comedy is a comedy group created by Brian Nichols, Paul Salazar Jr. and Bernardo Cubría.  The trio all studied together at the University of Houston and have kept in touch ever since.  Together, they create a weekly podcast and a video web series that satirizes the world we now live in thanks to Donald Trump.

“We created the channel the night of the election,” explained Bernardo Cubría.  “We were so confident in our Liberal Bubble that night that when it burst we were in pure shock. We had a Trump Piñata and everything. So we cried, we hugged, and then created this channel as a way to vent, inform and make sense of this new reality.”

The podcast comes out every Tuesday, hosted by Revolver Podcasts.  They have created several short form videos lasting anywhere from 40 seconds to a couple of minutes.  Cubría says they create videos as often as they can get them out, but admits the administration gives them too much material too work with.

“They do so many ridiculous things that sometimes it’s better to let the reality be the satire,” said Cubría.  “This entire channel would not exist if Trump hadn’t been elected. The podcast would not, the videos, nada. Both Brian and I are from Texas. We know a lot of Republicans and while we disagree with them we can understand where they are coming from. Donald Trump is a whole another level of hypocrisy. He created #MadeInAmericaWeek but makes all his products in China. He claims to be a man of the people and decorates his room in Gold. Oh and not to mention all the sexism and racism.”

“The Wall is really the most ridiculous concept of all,” continued Cubría. “First he claimed Mexico was paying for it and now he says at a later date. Then he said it would be 10 feet higher and span the length of the border. Now it’s gonna be just a small part and he claims it’s going to be invisible so that we can see the falling drugs. I mean, this stuff writes itself. This has to be the most insane idea ever proposed by a president and yet somehow the American Taxpayer may end up paying for this monument to stupidity. That is unless of course some Bad Hombres stop him…”

In a way, the satire serves as a form of therapy, but the group has a higher goal in mind as well.

“The main goal is to just point out over and over again that Donald Trump does not care about anyone but himself,” said Cubría. “This isn’t a Red vs Blue argument. We love Republicans, we love Libertarians, we just hate Donald Trump. He only cares about himself. He lies to people over and over again. Like when he said he had brought back 45,000 coal jobs. This is just a lie and to lie to people who have lost their jobs is a really terrible thing to do. So we want to make sure we keep pointing out his hypocrisy over and over again.”