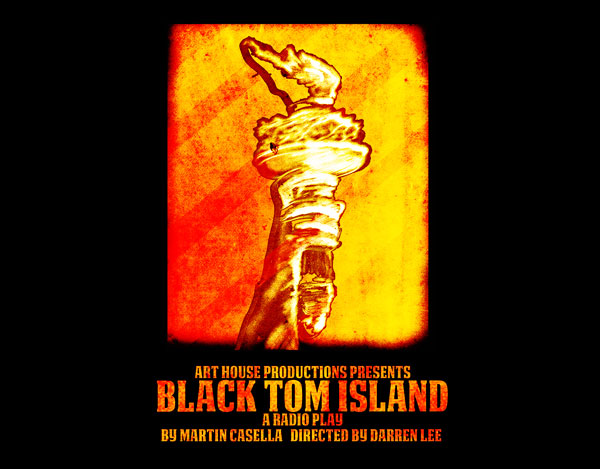 (JERSEY CITY, NJ) -- Art House Productions released their first audio play, Black Tom Island by Martin Casella on Monday, January 18. This free audio play will be available for download on the Art House website and YouTube page. Based on an actual incident that took place in Jersey City in 1916, Black Tom Island explores the first documented terrorist attack on American soil through the lens of a fictionalized Slovak immigrant and his wife who may or may not be involved in the attack.

Funded in part through the Hudson County Historical Partnership Grant, the original project was imagined to include in-person readings on location in Jersey City, however, to adapt the project to the current safety guidelines, Casella’s play has been adapted as a radio play directed by Darren Lee with sound design by Megumi Katayama. The cast includes Michael Stewart Allen, Damian Buzzerio, Mason Hensley, and Jenna Krasowski.

A free virtual panel discussion about the actual event featuring historians and the play’s creative team will take place on Sunday, February 7 at 3:00pm EST on Zoom.

“I grew up listening to old radio dramas, which our local Public Radio station (KCRW in Los Angeles) played on weekday afternoons. Shows like THE SHADOW and PAUL TEMPLE, where only the voices and sound effects told the story,” says playwright Martin Casella. “When Art House suggested doing a radio version of Black Tom Island, I jumped at the chance! What our brilliant actors, director, and sound designer have come up with is absolutely thrilling.”

“We hope this radio play will give our patrons a new way to experience the play and learn about this often overlooked important local historical event,” says Producing Director Courtney Little. “This is the first radio play Art House produced and it’s proven to be a rewarding challenge. We’ve translated theater’s spirit of collaboration, discovery, and creativity into this new format.”

The free historical panel on Sunday, February 7 at 3:00pm EST on Zoom will feature historians Janet Akhtarshenas of Liberty State Park and Timothy R. White of New Jersey City University, along with playwright Martin Casella and director Darren Lee. Moderated by Jim Peskin of Save Ellis Island. Additional panelists may be announced at a later date. Admission is free, advance registration is required to receive the Zoom link. To register, please visit www.arthouseproductions.org.

Michael Stewart Allen Most recently was seen playing, Juror 7 in 12 Angry Men at Indiana Repertory/Syracuse stage, Iago in Othello for The Acting Company in NYC and King Louis XIII in Ken Ludwig’s The Three Musketeers at The Shakespeare Theater of NJ.  Theater: The first Broadway National and International tour of War Horse with The National Theater of Great Britain. Company member at the Old Globe: King Lear, Madness of King George, Taming of the Shrew, The Tempest, Amadeus, and Much Ado About Nothing. Company member at The Shakespeare Theater of New Jersey for the last 20 years and performed in The Acting Company, Arkansas Rep, Delaware Rep, The Folger Theater, Playmakers Rep, Florida Studio Theater, Shakerbridge Theater, and the PA and NC Shakespeare Festivals. Film/TV: The Blacklist, Billions,  Admiral Rickover, Cold Mountain. Graduate of the University of North Carolina at Chapel Hill and proud member of Actor’s Equity and SAG/AFTRA.

Jenna Krasowski is thrilled to be reprising her role as Ewa Babek in Black Tom Island. She also lends her voice to the audio dramas Craiglockhart, and Cryptids: A Sci Fi Mystery Podcast. Recent theatre credits include Proof (Hudson Stage Company) and Across the Park (Araca Project). Recent film includes: Empty Nesters (short), Emma on the Roof (short), The Resistance (short), Nesting Dolls (feature) and Landing Home (web series). Thank you to Marty, Darren, Courtney, and Art House for the opportunity to bring this play back to life!

Zoom is an online video conferencing software that allows you to virtually interact when in-person meetings and events aren't possible. Participants must have wifi, download the application on a computer or smartphone, and sign up for a free Zoom account to participate. Make sure you've updated to the most recent version. (You can check your version by following these steps.) The Art House staff are available to help troubleshoot registration and download; please email info@arthouseproductions.org for assistance.