An Interview With Terrence Edmonds about "Wicked Enigma" 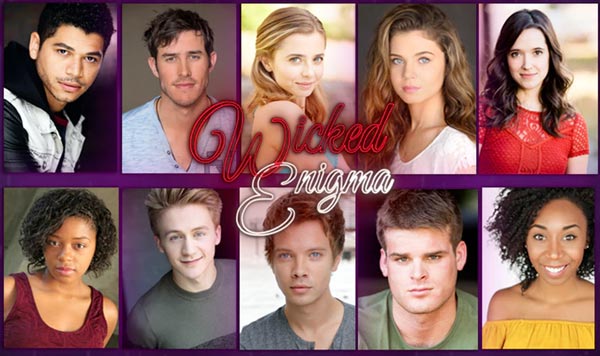 Terrence Edmonds has been seen on television shows like Grey's Anatomy, Major Crimes, and the remake of 90210.  His latest project is a series called Wicked Enigma in which he not only stars, but is the writer and director as well.  The series is currently part of a crowdfunding campaign on kickstarter and hopes to raise enough to shoot 16 episodes of the show. His partner, Jake Doull, is the editor and executive producer. We spoke with Edmonds via email to learn more about the project, which is described as an LGBTQ suspense thriller with the drama of Pretty Little Liars and the horror elements of Scream.

Tell me about the series. Wicked Enigma is an LGBTQ+ Murder Mystery webseries that begs the question: How well do you know your friends, because when everyone has a motive.. who do YOU suspect? It follows the lead character, Max, who is a bisexual filmmaker that gets a group together to shoot his college entry piece. Unfortunately, he had no idea that a more sinister plan is underway. His lead actress is murdered in the process and everyone is forced to keep quiet through peer pressure, blackmail, and murder. Max must survive betrayal, love, loss, and grief while being a pawn of an even more WICKED game. We have produced three episodes as a preview to the series that can be seen on our website.

On your kickstarter page, you say, “We're strong believers that representation matters and are striving to get more GAY/BI leads in stories for the youth to enjoy.” How important is it to have LGBTQ characters in shows?  I think it's imperative to have role models growing up. Everyone deserves to feel that they have someone they can relate to. By writing roles and voices where there are none, we can help alleviate the pressures of feeling alone and help entertain LGBTQ youth and young adults.

Do you believe having people grow up and see actors they can relate will help LGBTQ kids and young adults? I do. Many LGBTQ+ kids and young adults don't feel comfortable with expressing their feelings. Some can feel afraid to open up out of fear of being rejected by family and friends. We're hoping that with this series we can shine a light on the normalcy of LGBTQ characters and actors leading a show. If it helps one kid feel comfortable, then we've achieved our mission.

Are you disappointed in the support towards the crowdfunding campaign or do you think not enough people know about it? I definitely feel that not enough people know about our campaign, it's hard for indie filmmakers to get their voice to be heard. We knew that coming into it, but we have gotten wonderful responses over social media. This campaign was our way of trying to continue the season OUR WAY. If we are unable to successfully meet our goal at the end of the campaign, we have plans to sell to a network. Unfortunately, that route requires us to lose all creative control... it could possibly become an entirely different show.

On your kickstarter page you say, “My partner and I have been pursuing careers in the entertainment industry and combined we have over 15 years of experience. While that time was spent learning, we were fulfilling someone else's dream.”  In Wicked Enigma, you write, direct and star in the show.  Is the experience much more fulfilling for you? Watching my vision come to life is the most rewarding experience I have had in this industry. It may not have reached amazing heights just yet, but witnessing all these artists come together to create art and believe in this project is truly remarkable.

In addition to writing, directing, and starring in the series, you are also one of the producers. How difficult has it been to handle so many hats? It has not been an easy process, that's for sure. Filming this passion piece had its challenges, from limited funds, not enough hands, and many scheduling issues with cast members. Having to handle the issues of a director and producer can sometimes get in the way of being able to be completely relaxed enough to focus on a scene from an actor's perspective, but proper time management has been my best friend... and by proper time management, I mean this series has taken over my life! But I'm OK with it.

You’ve been part of many television shows.  Is shooting Wicked Enigma different than shooting a television show? Or is it more or less the same? Wicked Enigma is television, just short form. Each episode is roughly 12 mins long, and if you combine three of them you have a complete hour episode without commercials.

Did the concept of Wicked Enigma grow out of the Catalyst series?  Yes, it is a second attempt. We reworked the story a bit and had to do a complete over haul on most of the actors involved.

How many episodes of Wicked Enigma have been shot already?  How many are you committed to doing? We have filmed 5 episodes and there are 11 episodes remaining if we are successful in reaching our goal on Kickstarter.

Finally, with regards to fulfilling your own dreams - do you hope to do more writing and directing in addition to acting? MOST DEFINITELY! My partner and I have already been discussing ideas of projects to start next. Perhaps we won't be as ambitious with our next project being a 16 episode season, maybe some shorts, or even a movie. Just as long as I am still creating. I want to continue making art for many years to come.