An Interview with Raymond "The Amish" Comic 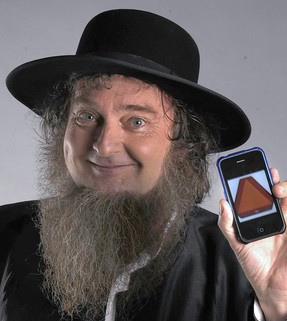 Raymond "The Amish" Comic is coming to Uncle Vinnie's Comedy Club (518 Arnold Avenue) in Point Pleasant this weekend. Since, we've never heard of an Amish comic before, we thought we'd get the scoop on the guy...

First off, why did you leave the Amish? Did it have to do with wanting to be a performer?
Lancaster is surrounded by the temptations of city life; farms run right up to the back of a McDonald’s parking lot. I sucked at farming, which meant not too many career options when you're Amish. A lot of people think I had some sort of realization one day while I was plowing the fields and said “I’m a pretty funny farmer.” I like that idea, but it was not my intention to be a standup comedian when I left.

I worked in a t-shirt screen printing shop. The levels of tension and employee fighting were unbareable. I used to goof around to try to lower the tension levels. The shop listened to a morning rock radio station - WZZO in the Lehigh Valley. The show was the Bearman and keith, they encouraged folks to phone in and say stupid shit. I seemed to crack up the goons in the shop with my comments. I didn’t even phone in the radio at first, co-workers would make the call and just hand me the phone. I was on the radio for about six months before I set foot on stage. The radio phone-ins went so well that I became a regular phone-in guest. The morning show would schedule for me to phone-in and I had to take a phone into the print shop bathroom because bosses tend to frown upon this sort of thing. My career started in the toilet!

What are your sets generally about?
After twenty-three years in stand-up, I don’t really have a lot of Amish-farming jokes. There ain’t that many. I believe that some people are afraid to come to my show because they don’t want to learn anything about the Amish, but they won’t learn much from me. I am obsessed with technology and have been described as a ranting-cursing-storyteller. I rant about iphones, Facebook, people's fear of snow, football, prescription drugs, and marijuana. I have been described as the common man's comedian. I mostly rant about everyday kind of things that we all deal with. When I first arrived in the city, there were no cell phones, only black and white TV and only three channels to pick from. So I also rant a bit about living through the evolution of technology.

I don’t think many people would think of the Amish as funny people. They seem like serious workers with rather hard lives. Are there many who tell jokes?
I hope and pray that I am the only one. When folks ask me how to find my facebook page? I tell them to google AMISH COMIC and if two of us show up, let me know and I will blow my fuck’n brains out and we’ll be down to one again. I think people's perceptions of the Amish being stoic zombies works in my favor. I do get worked up when I go off on a rant.

When someone leaves the Amish, can they stay in contact with their old friends and family or are you on your own?
When you leave, you are pretty much on your own; anyone left behind would need to sneak out to see you and that typically doesn’t happen. And once you're out, you can’t really go back for visits. “Hey, so how do you like city life?” It’s awesome. I’ve been tweeting to my facebook, kind of conversations do not happen.

Where do you regularly perform?
I have spent most of my 23 year career performing in Pennsylvania. I have a cult like following. I get to perform in some small theatres and a gaggle of comedy clubs. The Allentown area, Lancaster and Reading area’s have been good to me as well as the Poconos. It’s tough to convince a club to give me a shot. Once they do, the first time audiences of my show have just been fantastic. I am trying to travel to bring my show to every state that will book me. It’s tough when you don’t have the big TV credits. But I am ready to travel.

Your website has a thread about hiring an Amish comic for a summer pig roast. What’s the strangest gig you’ve been hired for?
I am a big fan of booking the private gigs. I have performed in people’s homes, garages, picnics, diners, and even a mental institution. I think the answer you're looking for here is the mental institution.

Comedy is a rough business and you’ve been able to do stand-up for 20 years. How has working social media helped you or made it more difficult?
Well if it wasn’t for social media, I probably wouldn’t get half the work I get. I think it’s wonderful and also horrible. I started in 1991, if I worked with a comedian that I admired or who seemed willing to help me, I might never see him again or it could take 8 months to a year and a half to get to talk to them again. So the ability to talk to other comedians and club bookers and DOING THIS INTERVIEW WITH YOU, makes social media just fabulous. It can also be overwhelming to see all the comedians out there looking for work. When you present yourself via the internet, it’s easy to get buried with the masses.

It’s fun to interact with the fans. I love to iphone photo my audience, Facebook them and hopefully they will find my page and tag themselves. It’s definitely a whole different monster. Calling bookers for work back in the 90’s was a lot of leaving voice mails and maybe getting through to an angry man who answered the phone by yelling “STOP CALLING ME!”

Finally, who do you want to win the Super Bowl now that the main dairy-influenced team is gone?
It’s true that watching the cheese heads get knocked out was a painful blow to my people. The Superbowl cracks me up every year because most of the country hated both teams when the year began. I hope there are a lot of crazy plays. SAFETY ON THE OPENING SNAP LAST YEAR WAS FUCK’N AWESOME.

I’m a closet Giants fan. As any Giants fan will tell you, this past year was all about watching to see just how bad they could be. And the Giants seemed to delight in showing us. I live in Eagles country so my football views are not very popular. One thing I liked about being a Giants fan this year is that they NEVER PRETENDING THEIR FANS WERE GETTING LAID. Eagles, teased and tormented their fans all year. The entire season Eagle fans thought they were going to get laid with a Superbowl or at least sucked off in the play-offs but the Eagles led them to the bedroom and said “SORRY HONEY. NOT THIS YEAR I HAVE A HEADACHE!

Raymond will be at Uncle Vinnie's Comedy Club (518 Arnold Avenue) in Point Pleasant on January 23-24.