An Interview with Kevin Maynor of Trilogy: An Opera Company, which Presents the World Premiere of FIVE at NJPAC on Nov. 12
NEWS | FEATURES | PREVIEWS | EVENTS
By Spotlight Central 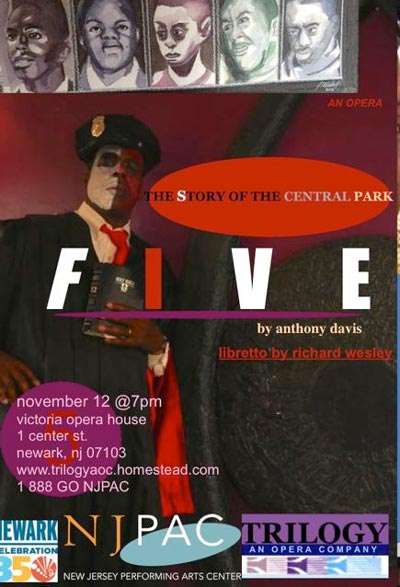 On Saturday, November 12, 2016 at 7:00 p.m. at the New Jersey Performing Arts Center (NJPAC), Trilogy: An Opera Company will present the world premiere of the opera, Five. Actor/activist Danny Glover and others will participate in a pre-performance discussion hosted by MSNBC’s Tara Dowdell, which is scheduled to begin at 6:30 p.m.

This new three-act opera by internationally acclaimed composer Anthony Davis, with libretto by Richard Wesley, is based on the story of the infamous 1989 Central Park Five case in which five teenagers were wrongly accused of molesting a woman jogger in New York City’s Central Park.

Davis — known for incorporating a number of different musical styles, including jazz, R&B, gospel, non-Western, African, European classical, Indonesian, and experimental music — examines themes of injustice and triumph over adversity through an operatic lens. Opera News has called Davis “a national treasure” for his pioneering work in opera, but his work has also made an important contribution to chamber, choral, and orchestral music. On the cutting edge of improvised music and jazz for over three decades, he is currently a professor of music at the University of California, San Diego.

Librettist Richard Wesley is a celebrated African-American playwright and screenwriter for television and cinema. He is also an associate professor at New York University’s Tisch School of the Arts, where he is presently the chair of the Rita and Burton Goldberg Department of Dramatic Writing. Mr. Wesley was born in Newark, NJ, and grew up in the city’s Ironbound section.

Trilogy: An Opera Company’s Executive/Artistic Director, international opera singer Kevin Maynor (bass), will be featured in the piece with Julius Williams conducting. Trilogy is one of the few opera companies in America which focuses its artistic efforts on heroes, heroines, and historical events from the experience of black Americans. Through the music of black composers, Trilogy tells the compelling and important stories of the black community that permeate the fabric of American culture. Former Trilogy productions include Nat Turner, Frederick Douglas, Harriet: A Woman Called Moses, and Robeson: The Opera.

Spotlight Central recently had an opportunity to chat with Kevin Maynor, Trilogy’s Executive/Artistic Director, who talked about Trilogy: An Opera Company, its decision to present the world premiere of Five, and why audience members should come to NJPAC to experience this innovative new work.

Spotlight Central: What can audience members expect to see and hear at the upcoming world premiere of Five?

Kevin Maynor: They should expect to see a piece that, I think, is probably one of the most important contemporary works of its time. The piece will include artists who are very sensitive to the various genres that present themselves in today’s society. The composer, Anthony Davis, has put together sounds that will be immediate for the population listening. And the text they will hear from librettist Richard Wesley will not be very far from them — it will be the text and the sounds of the people, pretty much, of their generation — because we’re talking about the ‘80s here. So they’re going to see an opera that’s motivated by the music — people on stage in a very contemporary fashion — and it will require those who are enjoying the event to listen and to watch closely.

Spotlight Central: What made your company, Trilogy: An Opera Company, decide to present this particular work?

Kevin Maynor: Well, it’s reflective of the world in which we live right now. There’s a great deal of confusion concerning the masses, if you will. We have white and black and brown and yellow — and all of these things going on that are separating us. We have shootings happening and name-calling going on. We have neglect. And these things are causing us — the real artists in America, in particular — to focus on what is happening around us and to organize it in a way so that is digestible to the public. I mean, these are the sounds of the time and it’s very important right now to present this, I think.

Spotlight Central: We understand that Five librettist, Richard Wesley, was born and raised in Newark, NJ, and Trilogy: An Opera Company is based in Newark, as well. Are you from NJ yourself and are there any other NJ connections to this piece?

Kevin Maynor: I’m actually from New York — I was born in Mount Vernon and raised in a village called Tuckahoe, NY — but my family has been here now for 26 years. And in addition Richard Wesley, who is from Newark, Anthony Davis, the composer of Five, is from Paterson, NJ.

Spotlight Central: We understand that you will be singing bass in the opera. Can you tell us more about any of the other principal performers and the creative team surrounding Five?

Kevin Maynor: Well, I’ll be singing the fictional role of The Masque; the Central Park Five boys are being played by Keaun Guy, Sam McKelton, Sam McDonald, Raemond Martin, and Kendell Bass; and the District Attorney is being played by Kelli Butler. The orchestra is conducted by Julius Williams and the production is directed by Mark Clayton Southers, and it all takes place in the Victoria Theater at NJPAC, which is just about the size of a typical European opera house.

Spotlight Central: Given this is going to be the world premiere of this piece, how do you think people are going to react to it?

Kevin Maynor: They’re going to be intrigued by it! Because, first of all, it has taken a sort of interesting form. We could not have done this piece without remembering the words and the sounds of Mayor Koch and particularly Donald Trump — and there’s even a Donald Trump character in the opera, played by David Gordon. And there’s also another character in the opera — Matias Reyes — who was very much involved in all of this and the one who really should have been held responsible for all that happened to the Central Park jogger.

Spotlight Central: Taking this story right out of the headlines and adding this fictional character of The Masque to it really sounds very innovative.

Kevin Maynor: Yes it is. The librettist, Richard, had an idea about The Masque — where he was to be a lot of things. He’s a white person. He’s a black person. He’s evil. He’s ‘commentary,’ if you will. He moves around — sometimes he’s an attorney or a newspaper man, and other times he’s a judge or a police officer — so he’s all of these different things.

Spotlight Central: And that’s got to be a real challenge to play…and it must be a lot of fun, too!

Kevin Maynor: (Laughs) It is a lot of fun to play!

Spotlight Central: So is there anything else you’d like to say to folks who are reading this and considering coming out to see this world premiere of Five?

Kevin Maynor: Well, we are a company that focuses on the works of black composers and subject matter relative to the black experience. And we want people to come out and learn. You know, as an opera singer, I’ve sung Verdi and Wagner my entire career and I know so many things about European culture. And it’s important, I think, for people to come out and learn things about African-Americans they don’t know because it builds a certain kind of bridge — and confidence — when you have that kind of exposure.

I was an adjudicator one time at a piano competition with two white women. And one of the white women turned to me and said, “Mr. Maynor, you seem to be so comfortable with white people,” and she said, “What do you attribute that to?” And I said, “Well, let me ask you a question. Have you ever had dinner in a black person’s home?” And one of them said, “I have, once,” and the other said, “I never have.” I said, “Well, I’ve had dinner at, maybe, 600 white people’s homes, so I know you! The only thing that you don’t have is some familiarity with me — you don’t know me. But once you become familiar with me, then you’ll be at ease.”

Trilogy: An Opera Company’s presentation of world premiere of Five will be held at NJPAC on November 12, 2016 at 7pm, with a pre-performance discussion at 6:30pm. NJPAC is located at 1 Center St., Newark, NJ. For ticket info, visit www.njpac.org. For more information on Kevin Maynor and Trilogy: An Opera Company, please go to trilogyaoc.homestead.com.