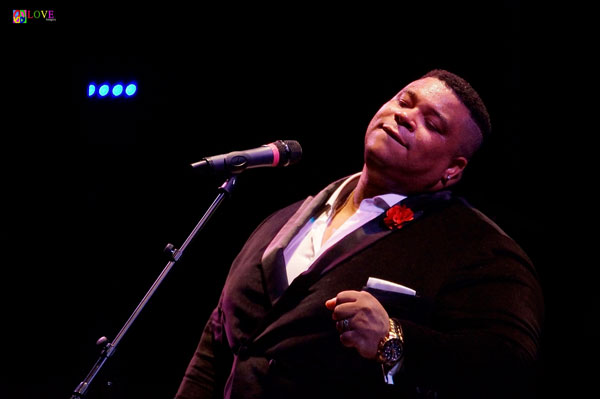 Michael Lynche, a soul singer from St. Petersburg, Florida, is known to audiences around the world for his appearances on TV’s American Idol where he finished in fourth place on Season 9 of the popular reality show. Although musically, “Big Mike” reveals he was was influenced by vocalists like Lauren Hill and Al Green, his fans say his voice reminds them of such smooth and soulful singers as Donny Hathaway, Luther Vandross, and Sam Cooke.

In 2012, Lynche released his debut album, the self-titled Michael Lynche, for which he co-wrote twelve of the thirteen tracks. One of the songs from the CD, “Today,” made its way to Adult Contemporary and Smooth Jazz stations nationwide. Other popular tunes on the album include such originals as “Intoxicated” and “Who’s Gonna Love You More.”

Currently on tour with his latest show, R&B Legends, Lynche made a stop at Toms River, NJ’s Grunin Center of the Arts — located on the campus of Ocean County College — on Sat. Feb. 17, 2018.

Opening with a rousing rendition of James Brown’s “I Feel Good,” Lynche is looking good in his black and white tux complete with cool sunglasses and a red flower in his lapel. 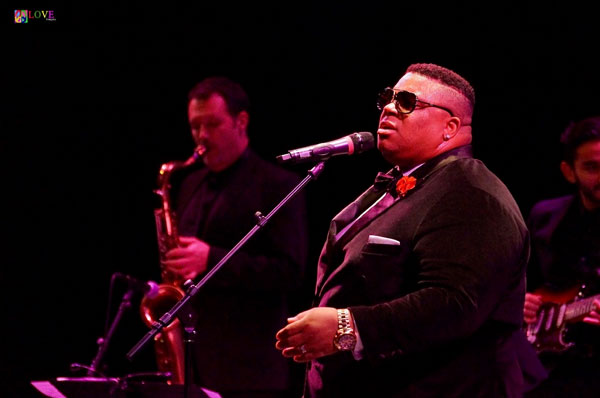 He’s also sounding good, too — his rich, resonant voice filling the Grunin Center auditorium with his smooth and soulful vibe. Accompanied by a quintet which includes sax, guitar, drums, bass, and keyboards, Lynche’s backup band grooves along as Mike sings, “I feel good/I knew that I would now,” before concluding the number with a declarative “Hey!”

“Tonight, we’re going to share the music I grew up on — the soundtrack to my life,” announces Lynche to the audience’s approval, citing such well-known artists as Otis Redding, Sam Cooke, and Al Green as examples of artists whose work he plans to cover this evening.

Launching into the 1972 Stevie Wonder classic, “Superstition,” Lynche’s arrangement is rhythmic and funky. 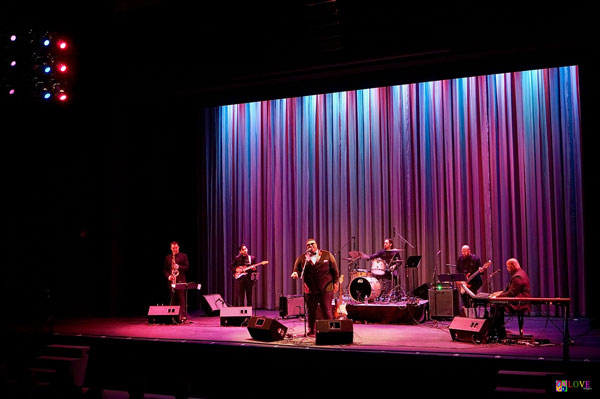 The band sounding energetic and percussive, the “wa-wa” of the keyboard’s clavinet keeps the arrangement on track as Michael deftly croons over the soulful beat.

Taking a moment to tell a story about how, as a youngster, he would sit on his front porch listening to 45rpm records over and over, Lynche goes on to note, “This next song was one of them. It’s by the ‘High Priest of Soul,’ James Brown.”

His voice pleading as he sings, Lynche performs a compelling rendition of “Unchain My Heart” with an arrangement which features a smooth keyboard solo and an ultra-cool guitar solo. 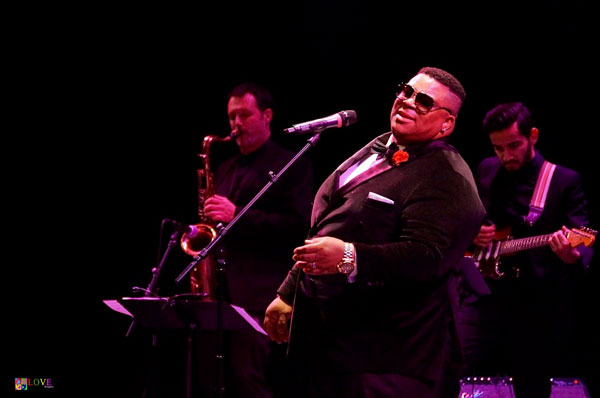 Revealing, “To me, Otis Redding had the most distinctive voice — filled with passion and pain,” Lynche performs his favorite Redding Song, “Try a Little Tenderness.” His big, soulful voice captures the crowd and elicits hearty applause and cheers.

Moving on to his favorite Sam Cooke song, Lynche performs a poignant rendition of “A Change is Gonna Come.” The saxophone’s background lines add to the pensive mood of the song before the guitar and sax trade extensive solos. Afterwards, Lynche exclaims, “Sometimes I just gotta let the guys play when they get into the zone!”

Launching into an uptempo rendition of another Sam Cooke song, “Twisting the Night Away,” “Big Mike” moves downstage, twisting as he serenades the crowd. 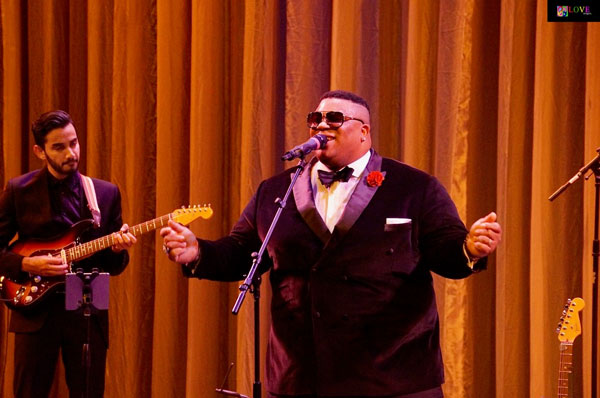 Several members of the audience twist in their seats to the joyful saxophone solo, bopping to the beat and adding to the cheery vibe.

Taking a moment to talk about his appearance on American Idol, Lynche acknowledges, “I got to experience some incredible things,” mentioning “theme nights by artists like Elvis, The Rolling Stones, and The Beatles” as high points.

A musical arranger as well as a singer, Lynche says he took a chance by arranging one of The Beatles’ classic numbers which originally featured a string quartet and changing it up to create a funk version of “Eleanor Rigby.”

Performing the tune live, the audience is impressed with his rendition which features a slap funk bass, brisk guitar figures, and soulful vocal runs, all of which transform the vibe of the song, making it an uptempo — yet still dramatic — form of musical expression. 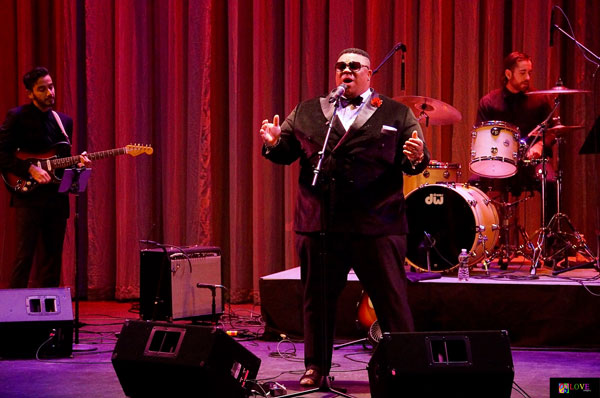 Following a brief intermission, Lynche and the band return for Act II. The audience cheers when the musicians retake the stage.

“This is one of my seriously favorite songs,” announces Lynche, explaining, “because it embodies James Brown.”

His voice crying out, Lynche performs a potent rendition of “It’s a Man’s Man’s Man’s World.” 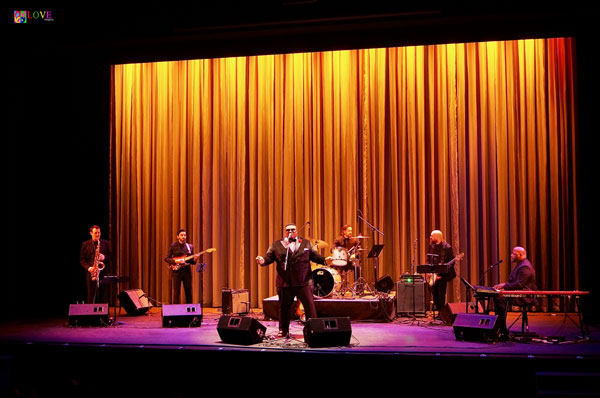 The drums and rhythm section sound cool and flowing under Lynche’s scorching vocal before the saxophone softly wails out a soulful solo.

“You all mind if I do a little Luther?” inquires Lynche before segueing into Luther Vandross’ “Never Too Much.” Upbeat and funky, the easy groove of the accompaniment perfectly complements Lynche’s soulful lead, the slap bass inspiring rhythmic handclaps from the crowd.

Calling him “The Reverend of Song,” Lynche goes on to perform an Al Green tune, “Love and Happiness,” which makes several members of the crowd hoot with delight. Clapping along with the beat as he starts, Lynche sings, “Happiness is when you really feel good about something,” clearly demonstrating how happy his favorite music makes him feel. 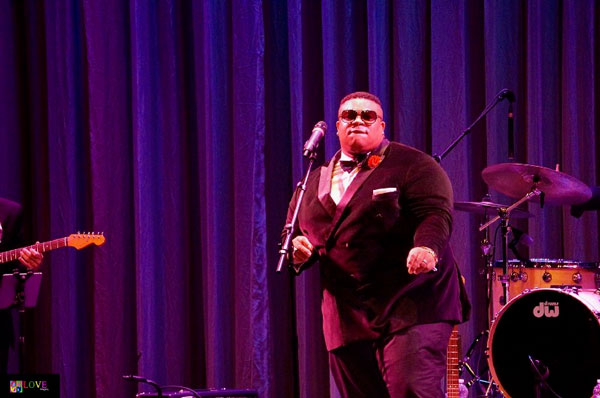 Heads in the audience bop in agreement as Lynche shows off his impressive vocal range.

Stating, “This next song is important because it was a favorite of my mother and brother,” Lynche confirms, “I’m going to do this one justice tonight.”

Performing one of the highlight numbers of the evening, Lynche sings a Leon Russell tune, “A Song For You,” which was recorded by many artists including Donny Hathaway, who created his best-loved version. Stripped down to just voice and keyboard, Michael’s heartfelt singing shows his emotional depth and range in this beautiful and simple performance which comes straight from his heart. 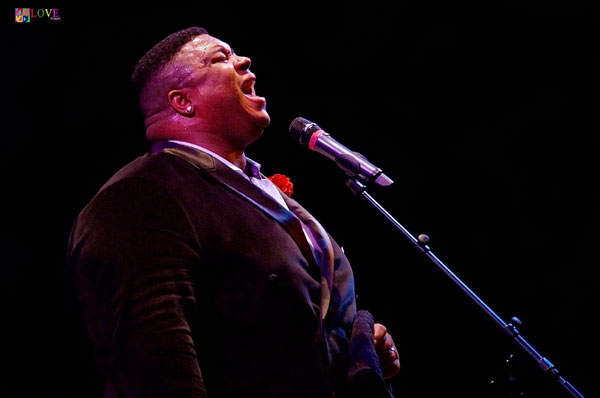 The audience applauds and cheers, after which Lynche straps on his guitar to perform an upbeat rendition of Gnarls Barkley’s “Crazy.” 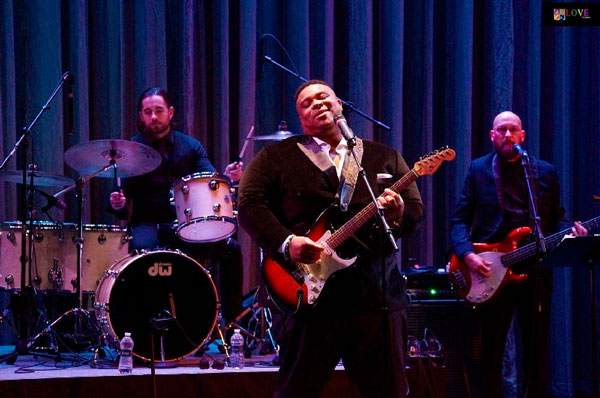 Slowing things down again, Lynche says, “I’m a man who sings about love, because I believe in love. I believe in the strength of love, the power of love, and I believe that love heals all,” adding, “I pray that you take this song with you.”

Here, Lynche introduces the crowd to an original song entitled “There Will Be Love” from his self-titled debut album. 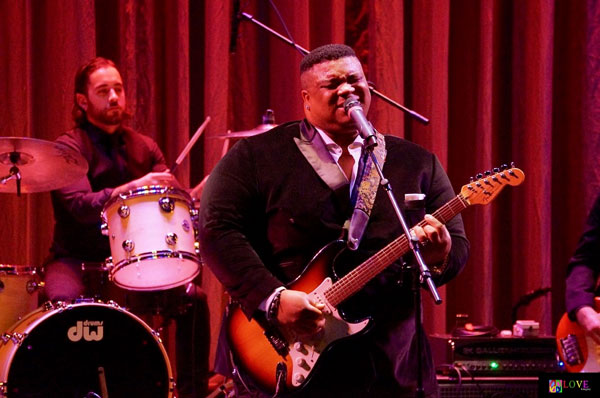 A poignant love song, Lynche sings, “One thing you can always be sure of — there will be love,” as his keyboardist and bassist accompany him with smooth background vocal harmonies.

Following avid applause, his drummer begins to play a familiar beat on the tom tom. As audience members start to dance in their seats and clap along, Lynche and his band play a fun and funky rendition of Marvin Gaye’s “I Heard It Through the Grapevine.” 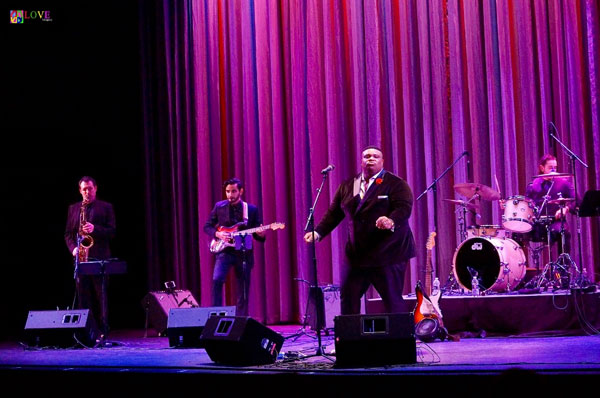 “Sing it!” yells out one audience member, and Michael has the audience echo-sing with him on vocalizations like “Oh, I, aye” and “He, he, ah.” Also featuring a sax solo and Lynche dancing on the instrumental interlude, by the song’s conclusion, the entire audience is on its feet, applauding for Michael Lynche and his R&B Legends performance!

As the crowd makes its way out of the theater, we chat with several audience members who share their reactions to tonight’s concert with us.

First, we chat with a group of music lovers — three friends who came to Lynche’s show tonight because they are a trio of self-described “R&B fans.”

States one of the women, Corley from New York City, “We really enjoyed Michael Lynche tonight,” before her friend, Matilda, from Newark adds, “He was so entertaining!” Their mutual friend, Francine from Toms River, chimes in too, exclaiming, “He gave a great performance!” 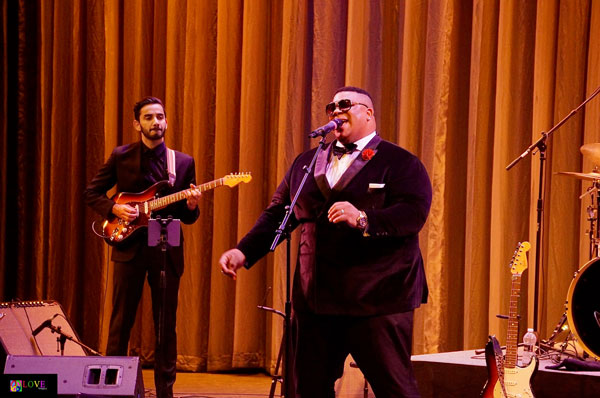 Next, we chat with John and Dawn, a married couple from Barnegat. Comments John, “Michael Lynche was great — I had a lot of fun — and his band was really tight!” His wife, Dawn, agrees adding, “I know Michael from American Idol! I loved tonight’s show. He covered a variety of different artists and really picked some great R&B songs!”

Lastly, we chat with Sally, another R&B fan from Brick, who reveals, “I really loved when Michael Lynche performed ‘This Song’s For You.’ For me, that number alone was worth the price of admission — it was one of the most heartfelt performances I’ve ever experienced live. You could just tell he was really singing it for his mom and brother — and doing it with only his voice and a piano, which left him so emotionally vulnerable right there in the moment and with no place to hide, made it a very inspiring and very impressive performance!” 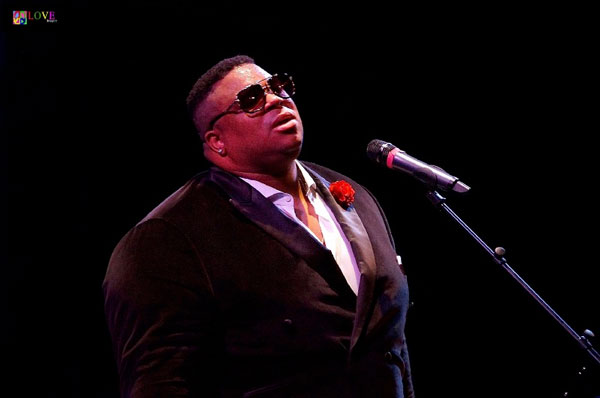 For more on Michael Lynche, please click on michaellyncheofficial.com. For information on future performances at Toms River’s Grunin Center of the Arts — including An Intimate Evening with Rickie Lee Jones on March 22, Tom Chapin and the Chapin Sisters on April 21, and Peter, Paul and Mary’s Peter Yarrow on May 11 — please go to grunincenter.org.