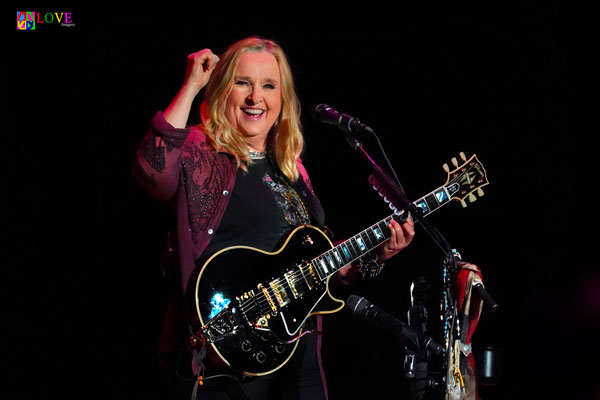 Music lovers are lining up outside BergenPAC in Englewood, NJ this Friday, October 22, 2021 evening for a live concert by singer/songwriter Melissa Etheridge.

Melissa Etheridge was born in Leavenworth, Kansas in 1961. Her father was a high school teacher and athletic director and her mother was a computer consultant. Melissa began playing guitar at the age of eight and performed in a variety of country music groups throughout her teenage years.

While attending Boston’s Berklee College of Music, Etheridge played the local club circuit before heading out to Los Angeles to pursue a career in music. There, she was discovered by Island Records. After her first album was dismissed by the record company as being too polished, she completed a stripped-down replacement album, Melissa Etheridge, in just four days. Released in 1988, the recording went on to become an underground hit and the album’s single, “Bring Me Some Water,” was nominated for a Grammy. 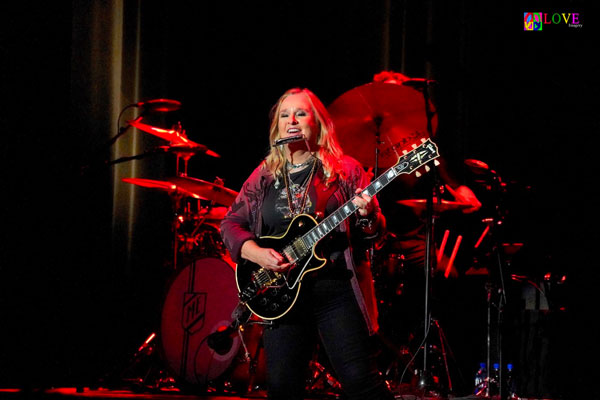 After contributing background vocals to Don Henley’s album, The End of the Innocence, Etheridge released her second recording in 1989, Brave and Crazy, which garnered her a second Grammy nomination. Her third album, Never Enough, helped to deliver Etheridge her first Grammy win for Best Rock Vocal Performance.

In 1993, Etheridge achieved mainstream success with the release of Yes I Am, a recording which spent over two and a half years on the Billboard charts and was certified Platinum six times. Her latest recording is One Way Out, a collection of music written in the late 1980s and early 1990s which she recently unearthed and released in October, 2021.

Inside the BergenPAC auditorium, under cool blue lights, the stage is set with an organ and pedal steel guitar on the left, a drum set in the center, and amplifiers and a bass on the right. Music by artists including Amy Winehouse and Bobby Gentry gently plays in the background as audience members chat amongst themselves.

The crowd comes to life as the lights dim and multi-instrumentalist Max Hart, drummer Eric Gardner, and bassist David Santos take the stage. The sound of an electric guitar fills the BergenPAC auditorium as Santos’ bass booms and Gardner’s hi-hat snaps. Fans rise to their feet as Melissa Etheridge enters playing guitar and harmonica before taking to the mic to sing, “One Way Out,” the anthemic title song from her newest recording. Audience members dance at their seats to the Etheridge’s unmistakable alto as she croons, “Yeah, you can scream and you can shout/But there is only one way out/There’s only one way out!” 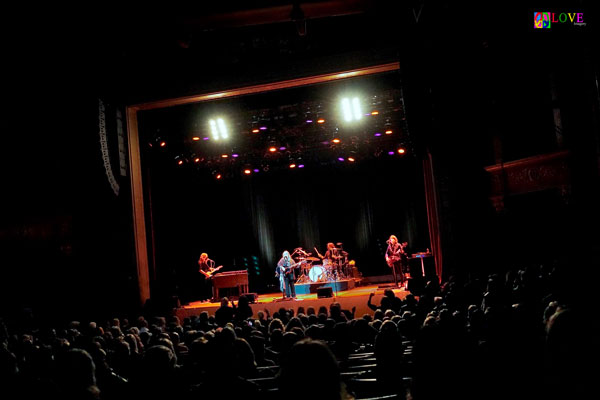 Without skipping a beat, Etheridge and the band segue directly into the hard-driving “Your Little Secret,” after which she exclaims, “I had to get that out of my system! I’m so glad to be back in New Jersey — I missed you!” before performing the strumming rocker, “No Souvenirs,” and the bluesy “Yes I Am,” which features a nimble David Santos bass solo. Max Hart’s pedal steel guitar twangs ethereally above Etheridge’s heartfelt vocal on “Talking to my Angel” as audience members sing along. Bass and guitar pick out a funky groove on “Ruins” with Etheridge’s soulful vocal adding to the intensity of the performance.

The audience stands and joins Melissa in singing her much-loved 1996 composition, “I Want to Come Over.” Accompanied by her 12-string guitar, the audience happily joins in on the “I want to come over/To hell with the consequence/You told me you loved me/That’s all I believe” refrain.

Etheridge tells the audience, “I have a new album out — it’s older songs that didn’t make it onto other albums,” before introducing one of those efforts, “You Have No Idea,” a composition which was influenced by one of her favorite artists, Bruce Springsteen. Rocking guitar starts off the number and the rest of the band follows as Etheridge croons, “Once upon a time, there was a secret in a box/It was frozen up tight, it was chained and it was locked/A hundred thousand lovers could never break the seal/One night in your arms, honey, you have no idea,” before the entire crowd joins in singing on the catchy “Sha la la, sha la la, oh-oh” refrain.

“I always dreamed we would sing that ‘Sha la la, sha la la, oh-oh’ part together!” declares Etheridge, before adding, “This is one of my favorites,” explaining, “Whatever other people think of you is none of your business,” a maxim which led her to write “As Cool As You Try.” Etheridge’s vocal is as bluesy as it is edgy on this twangy rocker where she adds a wah-wah effect to her guitar and Max Hart switches between steel pedal and electric guitar.

Declaring, “I can’t stop doing this song — I get lost in it every night,” Etheridge performs “Chrome Plated Heart.” With its irresistible funky bass and guitar part, Etheridge sings, “I got a chrome-plated heart/I got wings on these fingers trying to tear it apart” before playing a solo at the foot of the stage, obviously enjoying the vibe and energy coming from the crowd that dances and sways until the room erupts into a roar of applause. 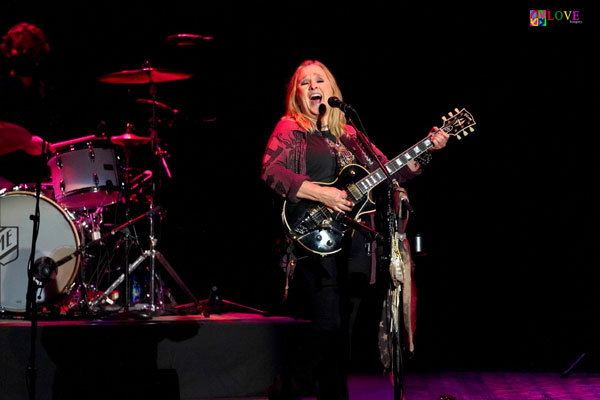 Following the country-rocker, “Company,” and the electric “The Wanting of You,” Etheridge performs the power ballad, “To Be Loved,” where she opens her heart and soul through her music. On her languid guitar solo, the notes hang in the air and await her voice to join the collective dance of musical vibrations spun by her band of top-notch musicians onstage.

As soon as music lovers hear the guitar strumming intro to Etheridge’s 1993 Top 40 hit, “Come to My Window,” they rise to their feet. After stating, “Come on, New Jersey, sing it with me! ” the crowd joyfully sings along with Melissa on the song’s well-known “Come to my window/Crawl inside, wait by the light of the moon” lyric. 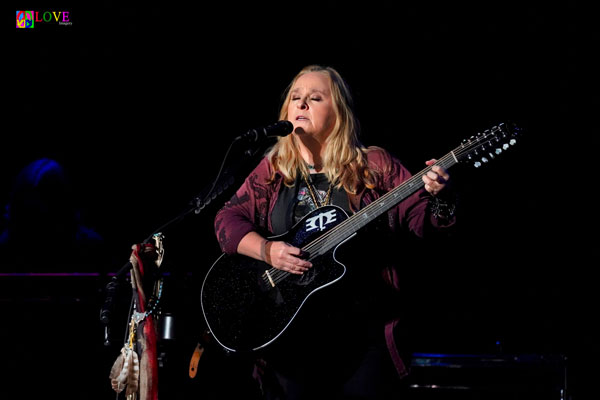 The crowd continues to clap and scream when they recognize the intro to her 1988 single, “Bring Me Some Water.” As the music plays, Etheridge introduces the members of her group and asks the rhetorical question, “Is New Jersey ready?” before answering, “Yeah, yes you are!” While lights flash, audience members enthusiastically sing along on the “Somebody bring me some water/Can’t you see I’m burning alive” chorus. Hands clap along overhead as Etheridge strums rhythmically — sliding her left hand up and down the neck of her guitar as she plays — to wild cheers and applause.

Melissa takes a selfie of the audience where everyone stands and waves before saying, “Thank you so much, everyone, for coming! It’s always such a pleasure to come to New Jersey. I hope I made you feel good tonight. Never take for granted live music and keep this good feeling with you.” At this point, she launches into her 1993 Top 10 single, “I’m the Only One.” Opening with it’s bluesy guitar intro, the crowd passionately sings along on this anguished love song’s famous “But I’m the only one/Who’ll walk across the fire for you” lyric. The packed house moves to the song’s infectious 12/8 meter as Etheridge rocks out on guitar, plays harmonica, and becomes one with the song. 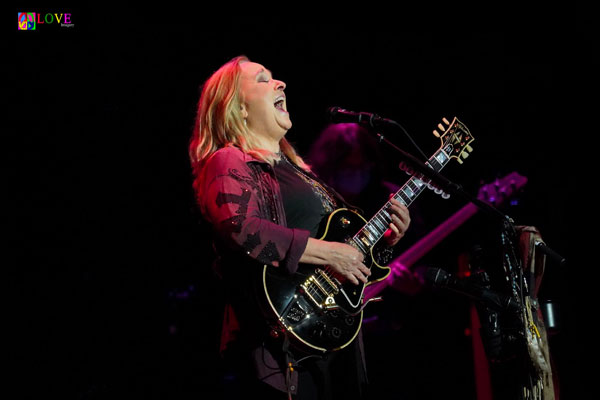 The band and crowd respond to Etheridge with a fury of sound from the stage and audience.

“I love you, New Jersey — thank you so much!” exclaims Etheridge. The musicians take a bow together and leave the stage, but return to perform another audience pleaser, “Like the Way I Do.” A cannon of confetti shoots out over the stage as music lovers sing along on this driving and funky tune. Rocking and dancing around the stage, her blonde hair hanging down, Etheridge puts down her guitar and strolls to the back of the stage to play a drum duet with Eric Gardner. Bass drum, high hat, woodblock, tom-tom, rims, and skins echo throughout the BergenPAC auditorium as Etheridge and Gardner’s choreographed hands and feet fly. After giving away her two drum sticks to members of the audience, Etheridge picks up her guitar and says, “Come on New Jersey!” Lights stream on the audience as they echo sing “Oh-ah-oh-yeah-oh” with Melissa before she blows a kiss, waves goodbye, and flashes a peace sign to the adoring crowd.

As we make our way out of the theater, we chat with several audience members who share their opinions of tonight’s show. Declares Lisa from Bloomfield, “Melissa Etheridge was awesome, and I especially loved the drum solo at the end!” Lisa from Hopatcong remarks, “She sounds exactly the same as she always has — she hasn’t lost a step,” noting, “She still has all the same sexy energy she’s always had.” Ray from Hopatcong concurs, recalling, “The last time I saw her was back in the ’80s, and she still sounds exactly the same.”

Michele from Wellington — who has seen Etheridge in concert nearly 40 times, and who also received one of the drumsticks tonight from Melissa — exclaims, “It was an awesome show! Melissa was very energetic and really ‘into it’ tonight.” 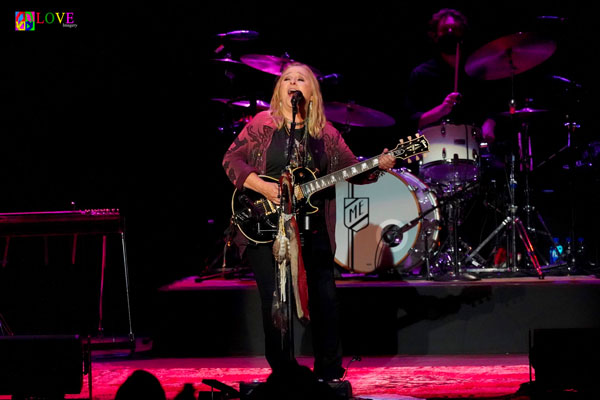 Helena from Wellington agrees, adding, “I’m a longtime Melissa Etheridge fan — since 1989. Melissa changed up some of her music tonight and did some of the songs that she usually doesn’t do which made for a nice treat.”

Barbara from Haworth calls Etheridge’s performance tonight, “Absolutely amazing!” Explaining, “It was a great surprise to see her play the drums,” Barbara insists, “She’s still got it — she hasn’t dropped a beat.” Stephanie from Nyack, NY agrees adding, “It was exciting — so much energy! It’s crazy that she could put on a performance like that for two full hours,” before noting, “and the ‘Like the Way I Do’ encore was the best — it was like a jam session!”

Lastly, we chat with Nicole from Nyack, NY, who exclaims, “I just adore her! I’d never seen her live before tonight, but I was blown away! Her voice is raspy and sexy, and she’s only gotten better with time,” before concluding, “She’s just absolutely epic!” 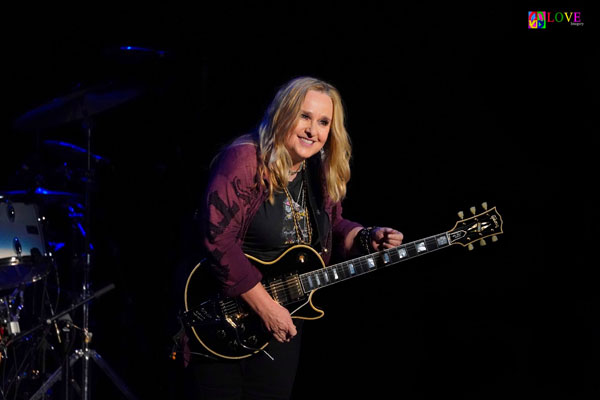