A Look At The 5th Annual Rahway International Film Festival 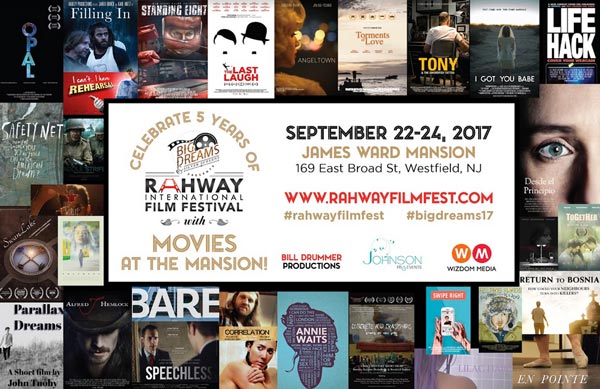 (RAHWAY, NJ) -- Celebrating its 5th Anniversary, the Rahway International Film Festival has relocated to Westfield, New Jersey, taking root at the stunning James Ward Mansion.  The move comes at the heels of their ongoing transition to the new 501(c)(3) non-profit organization, Big Dreams & Silver Screens Inc. The festival will ring in its 5th season with their Opening Night Gala on Friday, September 22, 2017 and will continue through Sunday, September 24, 2017.  Showcasing films from as far as Estonia and India and as well as those from the Garden State the festival presents the work of independent artists across the globe.

It is the festival’s vision and belief that film can reach the mind and soul in ways nothing else can.  For this reason, they present films that strive to promote equality, champion the oppressed and promote open-mindedness.  Further promoting equality, all films presented will showcase the talents of both male and female filmmakers in equal ratio.

Following is the full schedule with times and descriptions:

Opening Night Gala 6:30pm - 8:00pm; Tickets: $75 - Hosted in the Atrium at The James Ward Mansion, the Gala is a red carpet affair.  Guests will be treated to an open bar with complimentary wine, beer and champagne, complimentary hors d'oeuvres and dessert (courtesy of Morano Gelato Westfield).  Guests may feel free to explore the mansion, enjoy an impromptu photo shoot, get interviewed on the red carpet and enjoy the party before moving into the evening’s film screenings. Due to high demand, tickets for the Opening Night Gala are available for ADVANCE SALE ONLY until Friday 9/22 at 1:00pm.

Opening Night After Party 10:30pm - 12:30am - Tickets: Included with Any Purchase - Ticket holders will enjoy an after party at 16 Prospect Wine Bar & Bistro,  just steps away from the James Ward Mansion and minutes from the Westfield train station.  Music duo, The Constant will be providing acoustic performances while guests enjoy light fare and a cash bar.  This is a perfect time to network and make new connections!

Filmmaking Seminar 11:00am-12:00pm - “Stunts on Set with the Nation's Leading Fight Choreographer” - Speaker: Rick Sordelet - Tickets: $10 - Learn how to keep your actors safe on set when it comes to film stunts. Famed fight choreographer and stunt coordinator, Rick Sordelet, shares his expertise and stories from his professional career as the nation's premier fight director.

​From his childhood home in Europe’s most besieged city, to a former concentration camp and to mass graves, Mitric confronts the incomprehensible: How could your neighbours turn into killers? And how can you rebuild lives and communities devastated by violence?

Feature Film Presentation: "D-Love" - Directed by: Elena Beuca - Country of Origin: California, USA/Romania - Language: English / Romanian - Genre: Drama - Synopsis: A couple with longstanding marital issues lands at LAX after a getaway in Europe. For a few years now, Stefania (Elena Beuca, has been working a job she detests and Dan hasn't worked at all. Their palpable strain is only made worse when a Danish vagabond, asks for a ride to the busiest freeway in Los Angeles. Stefania doesn’t want to have anything to do with the wanderer, but her husband Dan, much to his wife's horror, offers to bring this total stranger to their home.

How will this affect the couple?

The director invites you on a 3-day journey, seen through Stefania’s eyes, to view and discover that desired change doesn’t always come in the package that we want or expect.

Selected Screenplays: "The Badge, The Gun, and the Hangman’s Noose" written by Edward Santiago; "Hell to Pay: The Legend of Robert Johnson" written by Giancarlo Fusi; "The List" written by Drew Novelli & Lauren Greenspan-Novelli; "The Knight and the Slacker written by Joe Territo

Feature Documentary Presentation: "I Can't... I Have Rehearsal" - Director | Writer | Producer: Maddie Orton - Feature Documentary  |  Runtime: 59:57 - Country of Origin: New Jersey, USA - Language: English - Synopsis: For a select few, the high school musical is sacred. Every year those students come together for the Tonys of New Jersey high school musical theatre: The Rising Star Awards. But first, they have to get their shows off the ground. This is the story of six very different high schools from across New Jersey as they rehearse, perform and compete with the very same supercalifragilistic show.

​Following the films, there will be a Filmmakers Q&A with the attending Directors, Crew, and Cast.

Foreign Feature Presentation: "Torments of Love" - Directed by Jules Caroline - Country of Origin: France - Language: French - Genre: Drama - Synopsis: On an island off the coast of Guadeloupe, two sisters, Myriam and Vanessa, have planned to stay for a few days in the family house, where the sweet memory of their grandmother is still vivid. But Vanessa is not aware that a particular guest is expected for lunch and when she catches sight of their father coming, a cold and quiet man that she didn't want to see anymore, it is too late to escape the confrontation. Around the table, unsaid things, provocations and blunders will lead each individual to face their own ambiguous feelings.

Feature Documentary Presentation: "The Last Laugh" - Directed by Ferne Pearlstein - Country of Origin: New York, USA - Language: English - Genre: Documentary - Synopsis: The Holocaust would seem to be an absolutely off-limits topic for comedy. But is it? History shows that even victims of Nazi concentration camps used humor as a means of survival and resistance. Still, any use of comedy in connection with this horror risks diminishing the suffering of millions. So where is the line? If the Holocaust is taboo, what are the implications for other controversial subjects — 9/11, AIDS, racism — in a society that prizes freedom of speech? "The Last Laugh" offers fresh insights into these questions, with an intimate portrayal of Auschwitz survivor Renee Firestone alongside interviews with influential comedians and thinkers ranging from Mel Brooks, Sarah Silverman, Jeff Ross (Comedy Central Roast Battle), Larry Charles (director of Curb Your Enthusiasm and Borat), and Gilbert Gottfried, to authors Etgar Keret and Shalom Auslander, plus Abraham Foxman of the Anti-Defamation League.

Following the film, there will be a Filmmakers Q&A with the attending Directors, Cast, and Crew.

Join us afterwards at our Awards Ceremony at 10:30pm where we will be announcing and celebrating the winners of this year's Film Competition!