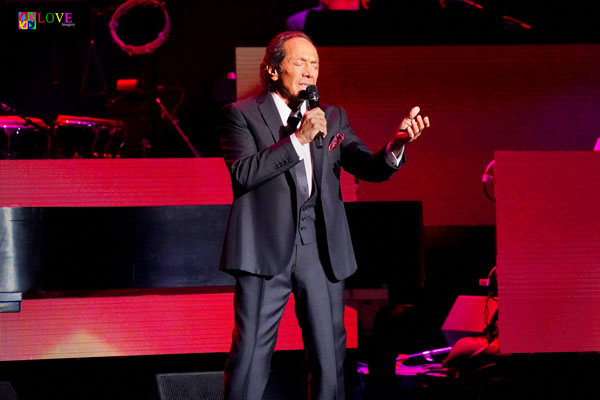 Music lovers are ready and waiting this Tuesday, October 26, 2021 evening inside the auditorium of Morristown, NJ’s MPAC. They’re all here for a night of music by the legendary singer/songwriter Paul Anka in a performance entitled Anka Sings Sinatra: His Songs, My Songs, My Way.

With rows of spotlights shining rays of blue and magenta onto a stage set for an eight-piece band, a photo of Paul Anka and Frank Sinatra is projected onto a large screen as soft jazz plays in the background. The lights dim, band members take their places, and audience members applaud following a short film orchestrated by the band.

Paul Anka energetically enters through the rear of the theater waving and fist-bumping with members of the crowd.

“Good evening, everybody!” he exclaims, welcoming the audience as he sings “You Are My Destiny.” 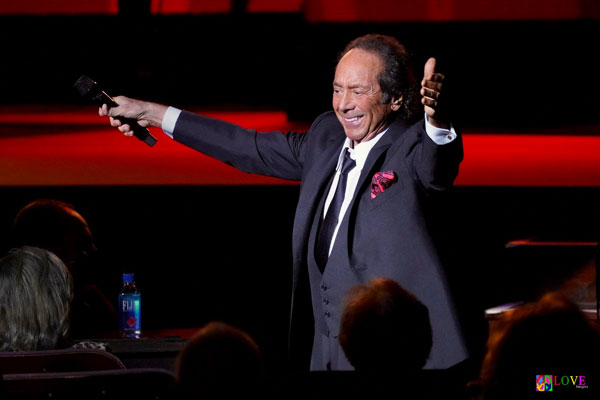 His voice sounding full, powerful, and resonant, Anka, 80, performs with charm and personality before making his way up to the stage and acknowledging the top-notch musicians accompanying him. Musical director Jon Crosse wails on the saxophone as audience members cheer.

After announcing, “Remember this one? It’s the first song I ever wrote,” Anka performs an upbeat and jazzy arrangement of his ‘50s-style rocker, “Diana,” where the audience happily joins him in singing the “Oh, please/Stay by me, Diana” refrain. 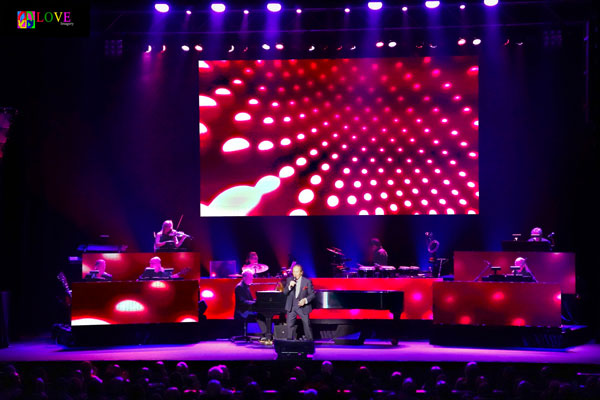 The audience cheers and Anka announces, “This is the first song Frank Sinatra recorded in 1946.” Launching into Sinatra’s “All of Me,” Anka sings effortlessly with style and flair, “All of me/Why not take all of me/Can’t you see/I’m no good without you.” Audience members bop their heads to the easy big band sound.

Revealing, “Sinatra once said to me, ‘Hey kid, I want you to write me another song,’” Anka discloses, “This is it — written for Frank Sinatra’s comeback.” As a photo of Sinatra is projected onto the screen behind him, two spotlights criss-cross and illuminate Anka who performs “Let Me Try Again.” The band plays softly underneath, gently underscoring Anka’s emotional performance which directly connects with the audience.

After telling the crowd about how he helped to discover singer Michael Bublé, Anka performs Sinatra’s classic Nelson Riddle arrangement of “I’ve Got You Under My Skin.” 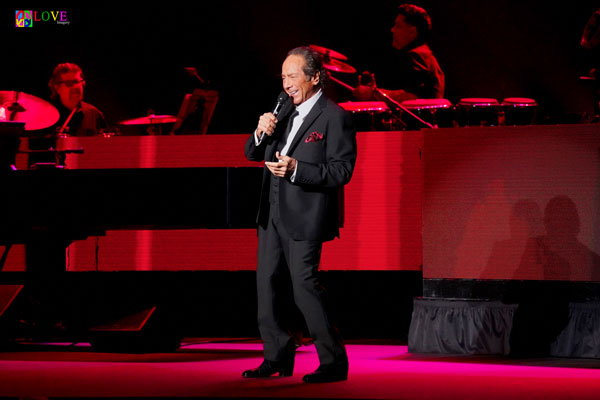 With the full sound of a big band behind him, Anka sings with youthful enthusiasm, and Jon Crosse plays a bright and brassy saxophone solo.

Anka tells the audience that the most important things in life are “your health, your family, and your friends,” adding, “This is for you and all the great times of your life that you’ve shared,” prior to performing his original composition, “Times of Your Life.” While Anka sings, “Good morning, yesterday/You wake up and time has slipped away,” photos of Paul with friends including The Beatles, Michael Jackson, Elvis Presley, Ray Charles, and Frank Sinatra appear on the screen — in addition to pictures of family members including his five daughters and 16-year-old son.

The crowd warmly applauds and Anka responds by stating, “Help me thank MPAC for the great job they do,” before launching into another Frank Sinatra tune — the Chairman of the Board’s 1966 chart-topper, “Strangers in the Night.” 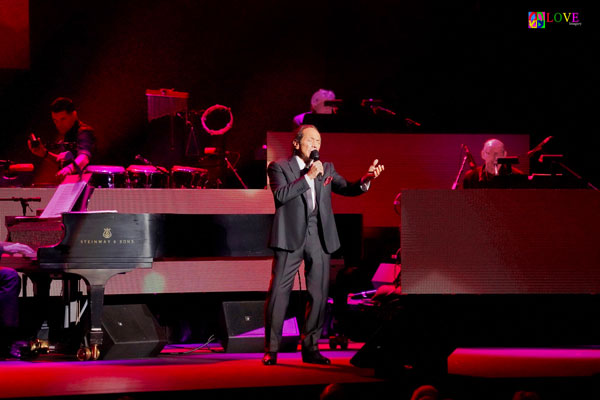 As rays of light revolve on the ceiling above the crowd, Anka puts his own spin on the number — interpreting the lyric with style and grace — his dulcet tone creating a lovely performance.

The crowd applauds and Anka responds, “Thank you so much,” before a man in the crowd calls out, “No ‘Dooby-dooby-doo’ at the end?” Anka asks the gentleman to come forward and hands him the mic so the man can sing the “Dooby-dooby-doo” coda. Introducing himself as John from Flanders, the man not only sings, but then praises Anka’s talents like a true fan, after which Anka warmly shakes his hand and addresses the crowd stating, “It takes a real man to do that!”

Acknowledging all of the veterans in the house, Anka performs the theme song he wrote for the film, The Longest Day. On this march-type number, drummer Graham Lear and percussionist Daniel López play a matching drum part which adds to the patriotic feel of this powerful ballad as an American flag waves on the screen behind them. Audience members rise to their feet following this stirring performance.

“They told me, ‘Don’t go in the audience!’ — but you all have masks on and you all look pretty healthy to me,” says Anka before making his way into the crowd and high-fiving fans while singing his 1960 hit, “Puppy Love.” 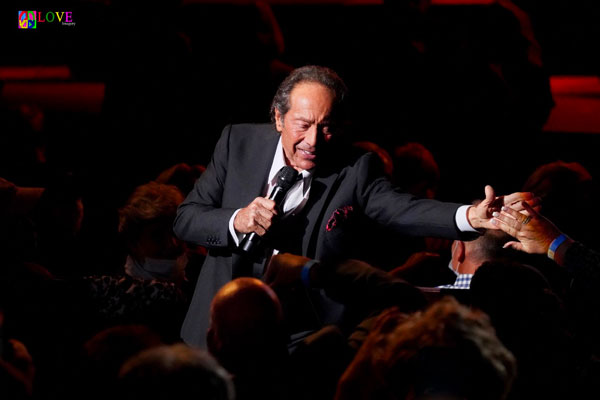 After dancing with several women, he grabs a fan’s cell phone and sings into it, “Yes, this is me/And you’re getting this show for free!”

Still out among the fans, Anka performs his 1959 chart-topper, “Lonely Boy,” where he croons, “I’m just a lonely boy/Lonely and blue/I’m all alone/With nothin’ to do.” Next, he segues into an upbeat Latin arrangement of “Eso Beso” where Graham Lear’s drums and Daniel López’s percussion drive the song as music lovers dance at their seats.

Declaring, “Get some Jersey grease on this!” a disco ball appears on screen as Anka reveals “I wrote this for Tom Jones” and the band segues into an upbeat and rockin’ rendition of “She’s a Lady.” Walking among the audience as music lovers clap along, Anka has the crowd sing along on the “Woah, woah, woah” lyric before taking a bow in the spotlight.

“I love taking that walk, looking at these smiling faces — with masks,” jokes Anka. Taking a sip of water, he toasts the crowd stating, “I drink to all of you — to good health for you,” before acknowledging about his musical career, “This is not work — this is my passion!”

Anka moves to the Steinway grand to perform “Do I Love You?” a song he recorded with Dolly Parton. Accompanying himself on the piano as he sings this intimate and personal ballad, his emotional vocal contrasts to his rolling keyboard sound, capturing the hearts of music lovers in the crowd. Violinist Eliza James enters with a lovely string line, adding to the beauty of the composition as Anka’s voice pleads, “Do I love you?/Yes in every way.” Jon Crosse follows with a jazzy Phil Woods-style alto sax solo. As Anka flawlessly holds out a long note at the end of the lyric, “Do I love you/Yes, in every way,” the audience stands and applauds with whistles and cheers.

Anka introduces Josh Sklair on acoustic guitar and picks up an acoustic guitar himself before performing “It Doesn’t Matter Anymore,” a song he wrote for Buddy Holly. This country two-step features an Eliza James fiddle solo and Josh Sklair playing a twangy guitar solo. After segueing into “Oh, Lonesome Me,” Anka and the group shift into The Everly Brothers’ “Bye Bye Love.” The audience happily sings along on the well-known “Bye bye love/Bye bye happiness” refrain, and Eliza James joins in on the fun with her fiddle before the group segues back to “It Doesn’t Matter Anymore” for a foot-stomping country jam with James’ fiddle sawing and the sound of a harmonica added to the mix. 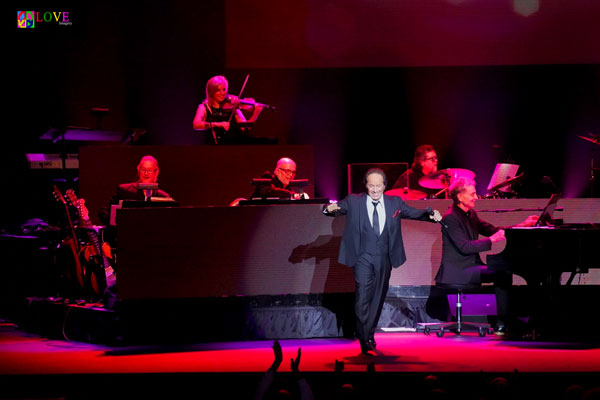 Music notes fly across the big screen as the band is featured on “Jubilation,” an up-tempo instrumental number played by the orchestra. Enrique Toussant slaps out a superb bass solo to open the song and multiple keyboards converse with one another while Anka energetically conducts, bringing band members in and out of the mix — pointing to one and then another — and giving each an opportunity to shine. 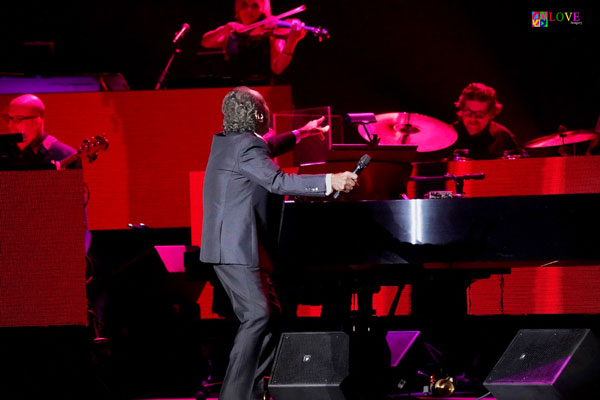 After Graham Lear plays a Gene Krupa-inspired drum solo, he and percussionist Daniel López take a percussion break — their intricate rhythms building in speed as López is reduced to a blur of hands on drums while Lear uses sticks to beat out an accompaniment. Soon, López switches to sticks and the pair plays fast and furiously creating a symphony of rhythm which delights the crowd.

The audience cheers and Anka takes a bow. He follows up by performing one of his greatest compositions, “My Way,” written for Frank Sinatra. 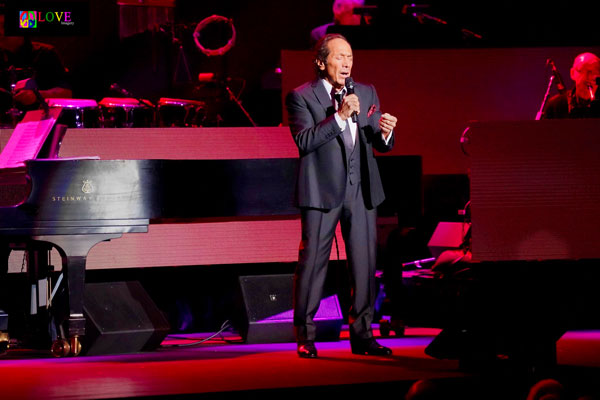 When he effortlessly begins, “And now, the end is near/And so I face the final curtain,” the audience cheers. As the piece continues, Anka’s dynamic vocal performance crescendos before Josh Sklair plays a lyrical guitar interlude. By the end of the performance, the entire MPAC audience is on its feet cheering, whistling, and applauding.

“Everyone stay standing — this is a stand-up song!” exclaims Anka, as photos of the New York City skyline appear on the screen. Here, Anka and the band perform their interpretation of “New York, New York,” which has the audience happily singing along on the well-known, “Start spreading the news” lyric. 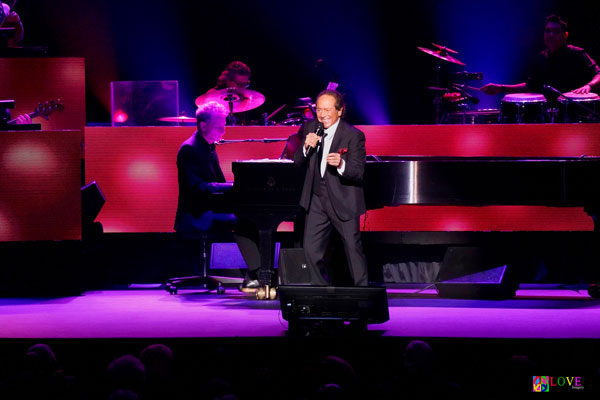 Obviously enjoying himself, Anka dances, and even does a few high-step kicks before slowing down for the dramatic “It’s up to you/New York, New York” conclusion.

As the crowd whistles and cheers, Anka stands in the spotlight bowing graciously before fist-bumping audience members at the foot of the stage. Announcing, “Thank you so much from all of us!” music lovers stand and applaud as the band comes downstage to bow together one last time. After Anka high-fives his band members, they exit the stage leaving Anka to take a solo bow before warmly waving goodnight. 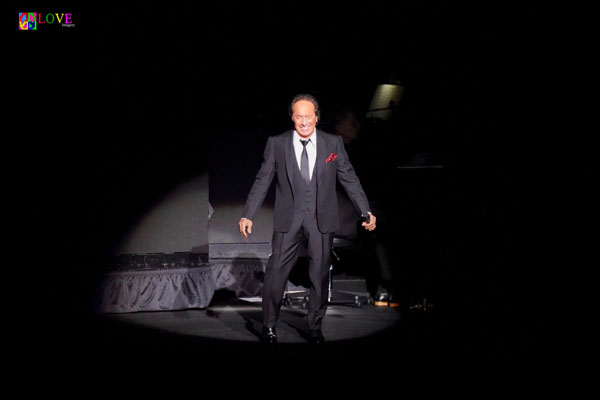 As we make our way out of the MPAC auditorium, we chat with several music lovers in the crowd who share their thoughts about tonight’s performance. Exclaims Alex from Warren, “Paul Anka is magnificent — just incredible! He’s so alive and happy to be here.” Cathy from Chester agrees, adding, “I’ve loved him since I was little and I never thought that I’d get to see him, but I did tonight and he was wonderful.”

Frank from Brooklyn declares, “Paul Anka is the best! He’s as good as ever — just excellent! As an entertainer, he’s the whole package.” Fran from Staten Island — one of the women who danced with Paul Anka tonight — concurs, adding, “He’s just the best!” before confessing, “I’ll have a sweet memory of dancing with him tonight, and I’ll come back again another time for another memory. I just love to make these memories.”

Lisa from Flanders insists, “Paul Anka was wonderful tonight — he did a great job, and he’s in such great shape.” Lisa’s husband, John — the man who sang “Dooby dooby doo” with Anka on stage tonight — remarks, “Paul Anka is a great singer. I’m so influenced by his music and his great talent, and I’ve been so inspired by his songs, like ‘Times of Your Life.’” Continuing, “It was empowering and humbling to sing and shake hands with him,” John acknowledges, “I’ve studied the guy, and I know he did things his way,” before concluding, “In my opinion, he’s a giant among giants!” 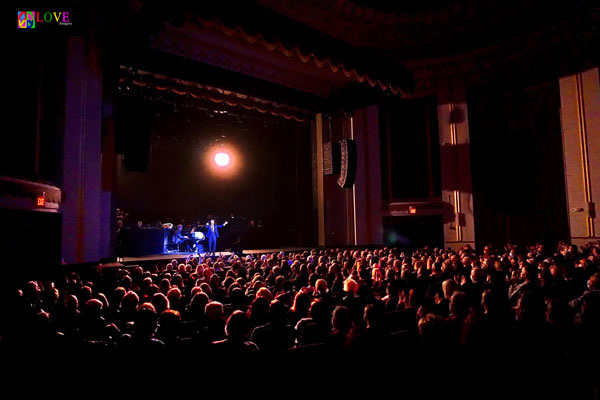 To learn more about Paul Anka, please go to paulanka.com. For information on upcoming concerts at MPAC — including Little Feat on Nov. 13, Boyz II Men on Nov. 20, and Max Weinberg’s Jukebox on Dec. 11 — please click on mayoarts.org.