When it Comes to Halloween Fun for the Whole Family, Frankenstein Rocks!
NEWS | FEATURES | PREVIEWS | EVENTS
By Gary Wien, JerseyArts.com 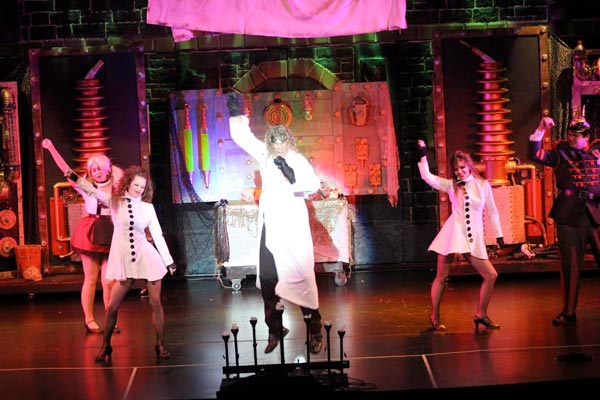 When you think of fun musicals for Halloween time, “Rocky Horror Picture Show” comes to mind for many. But what if you’re looking for a show that you can bring the whole family to? Riddlesbrood Touring Theater Company has the answer: “Frankenstein Rocks!”

“Frankenstein Rocks” wasn’t specifically written as a response to “Rocky Horror,” but the two share a rock and roll musical vibe and storylines that work well during Halloween season. Riddlesbrood and Mainstage Center for the Arts bring the production to the Dennis Flyer Theater at Camden Community College for three performances over the weekend of October 21.

The story revolves around the work-obsessed, mad Dr. Frankenstein himself, his loyal assistant and fun loving sidekick, Egor, and his flirtatious maid, Hildegarde, as they try to help the doctor create a new, improved monster. Meanwhile, a local town legend and wartime hero, Baron Bratwurst, is called upon to investigate the recent mysterious murders that have plagued the villagers’ quiet little town. Will the Doctor succeed this time? Will the killer be caught? Will the Baron put an end to all this madness?

Based in New Jersey, Riddlesbrood presents comedies and murder mysteries and performs throughout the tri-state area. A few years ago, long-time company member Brian Albert came up with the idea to create a murder mystery featuring Frankenstein that could be performed around Halloween time. The production, “Frankenmurder,” would eventually grow into “Frankenstein Rocks.”

“In 2015, we were working with The Strand in Lakewood, NJ and they wanted to do a large scale Halloween production that year,” explained Ryan Long (a.k.a. Clyde P. Riddlesbrood), executive director at Riddlesbrood. “So what we did was take the core of the ‘Frankenmurder’ show and basically blew it out. We turned it into a mainstage production over the course of about a year. We kind of rewrote it, but we left the funny, improvisational core. So, the main principles are still that silly, wacky, zany kind of ‘Airplane’ and ‘Ace Ventura, Pet Detective’ kind of humor.”

What separates “Frankenstein Rocks” from other shows is the music. In promotions, the company describes it as “the musical for people who don’t like musicals.” All of the music was written by Brian Albert, who used to play in bands years ago and brought his experiences to the production

“The music in ‘Frankenstein Rocks’ is a bit of a throwback to the 80s,” said Albert. “My inspirations are The Ramones, Twisted Sister, Motley Crue, AC/DC, Quiet Riot, and, of course, the king of horror rock himself, Alice Cooper.”

Long describes the music as a comic version of “Young Frankenstein” meets Kiss. “It has a lot of the funny humor – the silly, zany characters – but then it has knock your socks off rock and roll cool music in it too.”

Unlike the music in “Rocky Horror,” the songs in “Frankenstein Rocks” follows the Riddlesbrood code. The company believes in creating shows that are fun for the entire family. Long says some humor might involve double entendres that go over a kid’s head, but the company doesn’t believe in offending people. So, you won’t find vulgarity, cursing, or overtly sexual situations in their shows.

“I do like ‘Rocky Horror,’” added Long. “But it’s certainly not for kids. It’s very much for adults. Frankenstein Rocks has the cool energy and rock and roll vibe that ‘Rocky Horror’ has, but without all of the sexual stuff.”

One of the most unique attributes of Riddlesbrood’s show is in the way they incorporate children from the Mainstage for the Arts Performing Arts Academy into the show. In a way, there’s a show within the show concept at work.

The play is a hilarious look at the classic story by Mary Shelley that uses the monster and the basic concept as the starting point. Long describes the play as a vehicle for jokes, comic routines, and funny bits — more of an absurd farce than anything else. The setting is Transylvania, but the locals talk like southern hicks and call themselves the Transylvania Dutch.

“I wanted to create a show for Halloween that would become a new tradition for the season that everyone could enjoy,” said Albert. “I was tired of the nearly X-rated ‘Rocky Horror Picture Show.’ And, even though haunted houses and hayrides are a lot of fun, they only last 10 to 25 minutes!”

“’Frankenstein Rocks’ is meant to be something where people can sit down and just have a fun night out,” added Long. “We’re not trying to teach anybody anything or tell anybody anything. There are no moral lessons. It’s just straight up fun; something that lets people forget their troubles for a night.”

PHOTOS BY Victoria Pecchioli
About the author: Gary Wien is a music journalist from Belmar, NJ. A three-time winner of Asbury Music’s Music Journalist of The Year, his writing and photographs have been seen in publications like Upstage Magazine, Backstreets Magazine, Gannett Newspapers, and Princeton Magazine. He is the also the author of two books: Beyond The Palace (about the history of rock music in Asbury Park) and Are You Listening? (his picks for the Top 100 Albums of 2001-2010 by New Jersey Artists) and is the publisher of New Jersey Stage magazine.
Content provided by Discover Jersey Arts, a project of the ArtPride New Jersey Foundation and New Jersey State Council on the Arts.