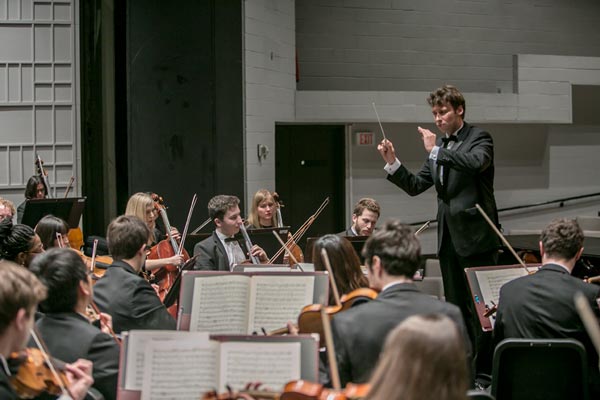 Symphony in C has an excellent program for classical music fans on January 28 at 8:00 p.m. The night includes a classic piece (Dvořák: Symphony No. 8 in G Major, Op. 88); a rarely performed work (Bernstein: “Serenade after Plato’s Symposium”) featuring special guest Augustin Hadelich, a 2016 Grammy Award-winning violinist; and the world premiere of “Vicious Circles” by Scott Lee, the winner of the orchestra’s 2016-2017 Young Composers’ Competition.

Lee, born and raised in St. Petersburg, Florida, is currently working towards his Ph.D in composition at Duke University. He describes his winning composition as, “a nine-minute orchestral work that explores a number of cyclical music ideas, each looping back on itself. The title refers to a chain of events in which the response to one difficulty creates a new problem that aggravates the original difficulty, resulting in an endlessly repeating loop.”

Symphony in C’s mission is to discover outstanding musical talents – artists who are on their path of becoming the musical leaders of tomorrow. The Young Composers’ Competition was created 20 years ago and each year the company chooses one selection from dozens of entries by composers throughout the country. The winner receives a professional recording of the performance and consideration by the Theodore Presser Company for inclusion in its rental library. Winning works have ranged from traditional to contemporary, with Lee’s composition definitely falling on the contemporary side.

“An essential aspect of my music is that it incorporates elements from different genres of popular music (like hip-hop and EDM) into its very core, alongside ideas from the world of concert music,” explained Lee. “While the influence of popular music might not be as apparent on the surface of ‘Vicious Circles’ as it is for some of my other pieces, the syncopated rhythms and thick orchestration are indebted to this sensibility.

“About two-thirds of the way through the piece, the influence of hip-hop is made explicit when the opening material returns on top of a heavy and percussive groove. I’m inspired towards this wedding of popular music and concert music by some of the composers who are most influential on my writing, including Béla Bartók and Thomas Adés.”

Stilian Kirov, Symphony in C’s Music Director, calls it “the music of today. I think the audience will absolutely love Scott’s work.”

Kirov said he shared the same agent as Hadelich, whom he was able to hear perform many times. He asked the agent if Augustin would be willing to perform with Symphony in C and she said he would and would very much like to perform Leonard Bernstein’s “Serenade after Plato’s Symposium” — a piece originally written for violinist Isaac Stern in 1954. Kirov thought Dvořák’s Symphony No. 8 would be a good companion piece since both are related to nature, and the show was born.

Symphony in C is one of three professional training orchestras in the United States preparing musicians and conductors who are on the cusp of first-class careers through concert, educational outreach and professional development programs. Bringing in special guest artists like Hadelich helps further this mission.

“In our profession as musicians, we learn from the best,” said Kirov. “No matter how far you are in your development as an artist, you always learn and it never stops. I think having artists like Augustin Hadelich as guest for the orchestra is extremely important because it gives us inspiration. We learn a lot – not only in the process of observing but in working together and making music together. Having the opportunity to work with this extraordinary artist at this stage of our careers is a blessing.”

Kirov said he first learned of Symphony in C while studying at Julliard, a period in which he was able to hear the orchestra perform. After graduating, he travelled around the country with stops at Memphis and Seattle before receiving an invitation to apply for the position of Music Director.

“When I had the audition, there was a moment when I thought that this was an orchestra that had no artistic limits,” recalled Kirov. “The fact that we have so many young professional musicians from the top major U.S. conservatories is inspiring, but what I think is the most gratifying aspect of the position is that these are musicians who give all of their heart and soul when they play.

They are also hungry to perform in front of the audience. They aim to bring excitement through their art and music making, and we try to create as many opportunities as we can for them as well. Every time I have a rehearsal or concert with this symphony, I feel extremely rejuvenated in a way and artistically inspired to go further and further with the orchestra in exploring different répertoire. I am constantly thinking what can we do to make a difference in the classical music world.”

One way they are making a difference is by bringing world-class artists like Augustin Hadelich to Camden. Another is presenting new works like the one by Scott Lee, which will open the program on January 28. Combined, it will surely be a night to remember.

Symphony in C performs in The Gordon Theater at Rutgers-Camden Center for the Arts (314 Linden Street) in Camden, NJ. Tickets range from $24 to $51. For more information visit www.SymphonyinC.org.