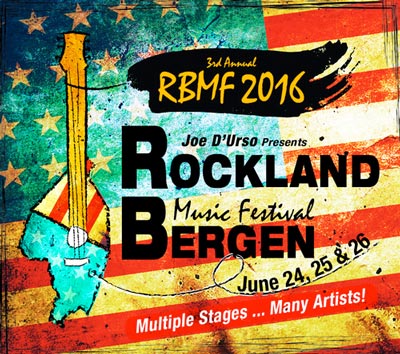 (TAPPAN, NY) -- On June 25 and 26, New Jersey/New York fixture Joe D'Urso will present the third annual Rockland-Bergen Music Festival on the borders of Rockland and Bergen counties in Tappan, New York. The festival is now entering it's largest and most ambitious year yet with over 22 artists on two stages and 15 non-profit organizations to realize D'Urso's vision of a musical event that combines great music and important causes.

Early bird tickets are currently on sale on at www.rocklandmusicfestival.com. Similar to last year, anyone born in the calendar year of 1966 will get in for FREE in celebration of their 50th birthday.

"As we head into our third year of the Rockland-Bergen Music Festival, we keep fine- tuning what we have been told is a very laid back and enjoyable experience. The unique German Masonic Park lends itself to the stripped down feeling of the whole weekend. This is a professional production while at the same time feeling like an extended family BBQ with lots of great musicians, some who happen to be in the Rock and Roll Hall of Fame and Grammy award winners," says D'Urso.

"I decided to go back to two stages of music this year, from the three stages of music we had last year, because with overlapping sets, music lovers at the the festival were missing out on great talent and performances. The stage on the field this year will be called the 'Glow-Seeger Stage' and it will be sponsored by Cannataro Park Avenue Financial."

"Our Festival mission statement reads: 'to bring great music to the beautiful areas of Rockland and Bergen counties area while raising awareness and consciousness of many organizations that are doing great work in various fields of health and humanity and have them be discovered and supported by music fans.' We realize that, unto itself, is unique among festivals and by improving the great talent we present each year, it has created a new type of Festival in our area."

"Right before the Festival last year we lost a great human being, and a great supporter of musicians, when Stefan Connelly tragically lost his life in a car accident. Stefan was the constant welcoming face when you entered the legendary The Turning Point music venue and he took great care of all musicians and patrons for years," says D'Urso. "I decided at that time to name one of the Festival stages 'Stefan's Turning Point Stage' in his memory. This past July, myself and Stone Caravan lost our dear brother and bass player, Mr. Lou DeMartino to asthma which he had battled for many years. It's a hole that will never be replaced. Like legions of bands before us, you find a way to go on and keep playing as that is exactly what Mr. Lou would have wanted as he was a live show musician and performer. If I had a dollar for every person Mr.Lou made smile in his life, be it on stage or off, I would be a very, very wealthy man. Stefan and Mr.Lou were kindred spirits in that they treated everyone they met with genuineness and warmth. Stefan and Mr.Lou also got along quite well, as you might imagine, and I thought it would be fitting to rename the stage this year the 'Mr.Lou/Stefan's Turning Point Stage.'" The stage will be sponsored by the new Time Nyack Hotel.

In addition to the two-day festival, D'Urso has once again added additional festival programming at the Turning Point, The 76 House, Holiday Inn, and The Time Nyack Hotel following the main events during the day.

This year, two rows of non-profit tents and tables will adorn each side of the entry to the park and will comprise "Active's Circle of Hope," brought to you by Active International. The non-profits are representative of the fabric of philanthropy and charity in Rockland and Bergen Counties.

“We are happy to be part of the Rockland-Bergen Music Festival team,” said Joe Allen, Active’s Senior Vice President, Community Affairs and Employee Communications. “The great music of the two day festival serves as a wonderfulbackdrop for people to get to know some of the non-profits that help our community each and every day. Having so many charities in one place gives us a great opportunity to support them all. ”

"Like the past two years, the three organizations that I work with throughout the year, Light of Day, WhyHunger and Dan Sullivan Foundation will be on site. We are also welcoming back many other organizations and opening our doors for a few more for the first time.," says D'Urso. "In total there will be 15 organizations on site and I personally hope that every music fan that comes to the Festival makes a connection, in some way or another, with at least one organization. That was the genesis of my thought process when putting this all together. I come from a Harry Chapin/Pete Seeger school of thinking at times and I truly believe we all live better/fuller lives when involved with organizations and people who have 'live hearts and live minds.'"

Children 12 and under admitted for Free with Adult