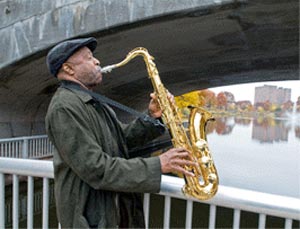 (NEWARK, NJ) -- On Wednesday, March 2 at 4:30pm, the Jazz & Rutgers 250 presents Jazz performances from the Leo Johnson Quartet and the NJPAC Teens Jazz Quartet; a solo exhibition mounted by the Brodsky Center of the paintings and prints about jazz by the artist Faith Ringgold; an exhibition of the works of Walter Dean Myers, as well as inspiring works from additional authors presented by the New Jersey Center for the Book. Refreshments will be served at the reception.

Registration is limited, click here for more information or to register

The Jazz @ Rutgers 250 performances will take place on the Newark Campus of Rutgers University. The Jazz performances will be held in the Essex Room at the Robeson Center (350 Dr. Martin Luther King, Jr. Boulevard, Newark, NJ). Following the jazz performances, attendees will move to the nearby Dana Library Galleries for the art and written word exhibitions.

Leo Johnson who plays tenor sax came to Newark in the late '50s before joining the service and becoming a member of the U.S. Air Force Band in Europe. After his tour ended, he returned to Newark and has been a mainstay on the jazz scene ever since. These days, he fronts his own quartet, but in the past he has played in the bands of Specks Williams, Bobby "Blue" Bland, Bill Doggett, Jack McDuff, Jimmy McGriff and Chico Mendoza. Johnson served as musical director of Little Jimmy Scott's band and also toured with organist Rhoda Scott, recording with her in Paris. He holds a BA in music performance and a master's in jazz history from Rutgers-Newark. Over the years, Johnson has also served as a mentor to many young musicians who either lived locally or came to the New York metropolitan area seeking a career in jazz, these artists include Cassandra Wilson, Winard and Phillip Harper, Terence Blanchard, Victor Jones, Andy McCloud, Dave Eubanks, Alan Watson and Regina Belle. Johnson has released two CDs in recent years: "It's About Time" and "Message to Mankind." He is the musical director of the Newark Jazz Elders, who were proclaimed in 2007, "New Jersey's living legends jazz band" by Jon Corzine, then Governor of the State.

NJPAC's Teen Jazz Quartet, members of the PAC's Jazz for Teens Program, which brings together 7th-12th grade instrumental and vocal students from diverse communities in the tri-state region (NJ/NY/PA) for multi-faceted, intensive instruction in jazz. The Music Director and faculty are professional touring musicians and teaching artists who mentor students in the time-honored tradition of the genre. 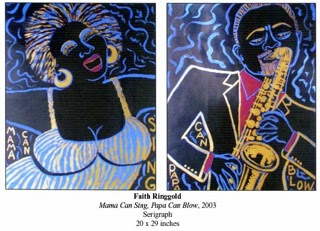 The work of Faith Ringgold is the centerpiece of the art exhibition.

She has received more than 75 awards, fellowships, citations and honors, including the Solomon R. Guggenheim Fellowship for painting, two National Endowment for the Arts Awards (for painting and sculpture) and 23 honorary doctorates, one of which is from her alma mater The City College of New York. Ringgold is professor emeritus at the University of California in San Diego, California and is represented by ACA Galleries in New York City. Ringgold has close ties to Rutgers and to its Brodsky Center. Her first big survey exhibition was at the Zimmerli Art Museum; she has worked on projects at and with the Brodsky Center; she has received a Rutgers Honorary degree; and Rutgers gives one of her prints as the official gift to honorary degree recipients.

For more than a decade the New Jersey Center for the Book (NJCB) has advanced a dynamic literacy agenda, championing its definition as the ability to read and write while extending it to include literacies rising in the 21st century. NJCB initiatives reach out to the richly diverse communities of our state, from those residing in our challenged inner cities to those in our outlying suburbs. A number of their initiatives will also be on display.

The work of Walter Dean Myers, collected posthumously, demonstrates that he is the centerpiece of the written word exhibition not only because he was a jazz enthusiast and supporter, but also because of the quality, uniqueness and intrinsic merit of what he produced as an author. A revolutionary thinker, he redefined the young African Americans male in literature and opened previously closed windows to their world. Critics have called him "one of the most important authors of young adult literature of our age." He won the


Coretta Scott King Award for African-American authors five times. His 1988 novel Fallen Angels is one of the books most frequently challenged in the U.S. because of its adult language and its realistic depiction of the Vietnam War. Myers was the third U.S. National Ambassador for Young People's Literature, appointed by the Library of Congress (LC) serving in 2012 and 2013. In 2016 LC instituted the Walter Award in his honor, given annually to the Emerging Majority author whose work features a diverse main character or addresses diversity in a meaningful way.

4:30-7:00 pm: Jazz performances in the Essex Room at the Robeson Center on the Rutgers Newark Campus

7:00--Refreshments plus exhibitions of art (the work of Faith Ringgold) & the written words (the works of Walter Dean Myers) and additional authors located in the Dana Library across the Norman Samuels Plaza from the Robeson Center.