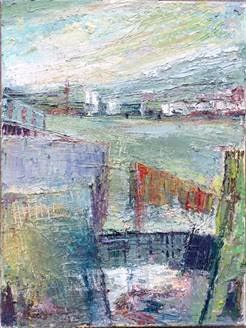 (ATLANTIC CITY, NJ) -- The Noyes Arts Garage of Stockton University is pleased to host a new exhibit in the Atlantic City Gallery by artist Andrea Sauchelli entitled, “The Earth and Concrete.” Her intricate paintings will be on exhibit from July 1 through August 16, 2015.  The official opening will take place during Second Friday, August 16, 6-8pm. The Second Friday event includes live music performed by the Dan Burke Acoustic Band, wine tasting provided by The Iron Room, and a host of other creative activities.

Andrea Sauchelli was born in Columbus, Ohio and currently lives in New Jersey. Growing up in the Midwest, surrounded by wide open spaces of farms with their rows of vegetation and geometric designs of fences influenced her creative expression. That part of the country with its flat landscapes, which reveal grid-like networks of trees and power lines across the terrain of open space, is reflected in her muted symbolism and use of paint. Says Sauchelli, “I am keenly aware of my surroundings, and as an artist I try to depict the evolution of native and man-made landscapes and their attempt to co-exist.”

Sauchelli earned a Bachelor of Fine Arts Degree from Rochester Institute of Technology. Her work has been on exhibit at various galleries and museums in New Jersey and New York.  Currently, Sauchelli is an active member of the Creative Art Action Council of LBI in Long Beach Island, New Jersey.

The official opening of “The Earth and Concrete” will be held during the Second Friday event on August 16 where guests will be able to meet and speak with the artist from 6pm to 8pm.  As always, Second Friday at the Noyes Arts Garage is free and open to the public. The Noyes Arts Garage is open Wednesday through Saturday from 11am until 7pm and on Sundays from 11am to 5pm, closed Monday and Tuesday.  For more information please call (609) 626-3805, or visit www.artsgarageac.com.

The Museum remains a 501(c)(3) organization, with general funding provided by: The New Jersey State Council on the Arts/Department of State, a state partner of the National Endowment for the Arts; the Mr. and Mrs. Fred Winslow Noyes Foundation; Stockton University; and the Geraldine R. Dodge Foundation.

The Noyes Arts Garage of Stockton University is free and open to the public Wednesday through Saturday from 11am until 7pm and on Sundays from 11 to 5pm, closed Monday and Tuesday. The Noyes Arts Garage is conveniently located just off the Atlantic City Expressway, on the corner of Mississippi and (2200) Fairmount Avenues, attached to the Wave Parking Garage in Atlantic City, New Jersey.  With a $25 purchase from any Arts Garage shop, parking in the Wave Garage is free.