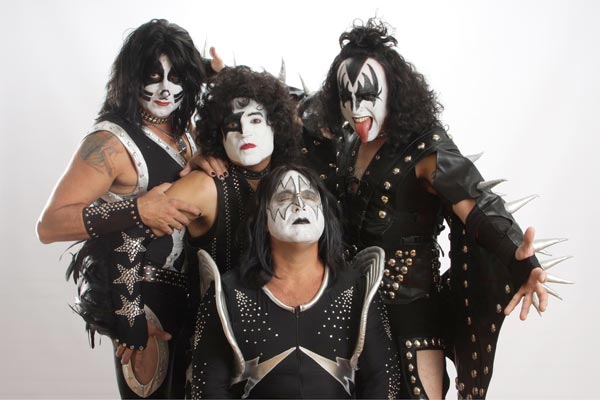 (Newton, NJ) --  Ultimate KISS Tribute Alive ‘75 will roar into the Newton Theatre on Saturday, September 19th at 8:00 pm. Inducted into the Rock and Roll Hall of Fame in 2014, KISS has been a dominant force in music for over forty years and this is where it all began. Alive! '75 will take you back in time to witness early KISS as they burst onto the music scene. This one-of-a-kind classic KISS tribute brings the iconic KISS Alive! album to life with all of the elements of a 1975-era KISS concert, including all of the sights, sounds and energy of the time period.

It was back in 1979, when three of the members, Anthony De Lucia, Jr (The Demon - Gene Simmons), Michael De Lucia, Jr (The Starman -Paul Stanley), and Anthony Russo (The Spaceman - Ace Frehley), built what may have been the first ever "Kiss-a-mania" tribute band and began performing in local venues in the Bensonhurst and Bay Ridge sections of Brooklyn, NY. After a few years of modest success (and their graduation from high school), the group disbanded to individually pursue various alternate musical interests.

Performing regularly as semi-professional musicians throughout their lives, each of the cast members, also including Joe Gillies (The Catman - Peter Criss) also looked forward to Halloween each year to re-live a bit of childhood fantasy.  In 2012, the group appeared together for the first time since the early '80s for a Hardyston Middle School benefit that completely rocked the town. In 2013, the group headed down the Jersey Shore and completely dominated the Jenks Club Halloween bash in Point Pleasant, NJ. With over 4,000 in attendance, they were a complete crowd favorite and easily walked-off with the grand prize for Best Overall Group.

But it was a night in October 2013 when a vision of a grand and powerful live concept performance of the KISS Alive! album was born. The next few months were a blur of solicitation and organization as they pulled together the resources necessary to deliver the Alive! '75 experience, which quickly moved from concept to reality.

"Hopefully fans who didn’t get the chance to see the original KISS back in ’75 will take the time to come out and see Alive! ’75, because this is the closest that you’re gonna get to the real glory days of KISS!”  - JR Smalling, KISS’s Original Road Manager and “The Voice” of the Alive! album (March 2015).

The historic Newton Theatre, located at 234 Spring Street in Newton, NJ, was founded in 1924. Revitalized and fully renovated, Sussex County’s premier entertainment venue reopened in 2011 as a 605 seat capacity live performing arts center. With it’s rich history and diverse programming The Newton Theatre is essential to the buoyancy of New Jersey’s Skylands region.