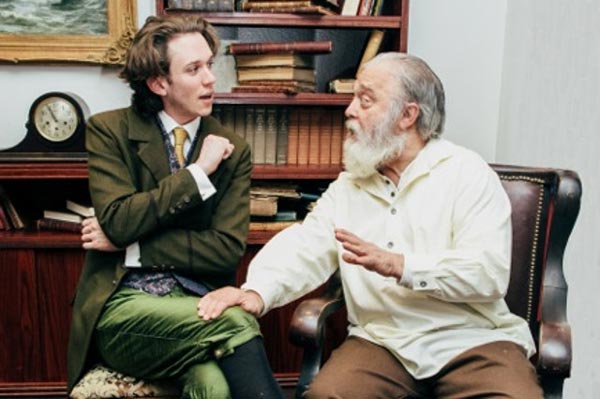 A different side of legendary Irish writer Oscar Wilde was recently on display at Walnut Street Theatre in a new play by Michael Whistler entitled Mickle Street.  The play revolves around a little known piece of literary history — the period in which the 27-year-old writer traveled to Camden, New Jersey to seek the advice of Walt Whitman.

In Mickle Street, we see Wilde’s wit evolve, but many of his words taste like young wine — a fledging writer struggling with his identity, convinced that he has already made it because of the many Americans who are attending his lectures, from New York and Philadelphia, all the way to Colorado — even though the press writes less than flattering reviews.

Whistler features the encounter of the rising, if fairly inexperienced, Wilde with the seasoned and much discussed Whitman, then 62, at his house on Mickle Street in Camden, NJ, on January 31, 1882.

Right from the beginning, the play shows Wilde reflected through the eyes of Gilbert and Sullivan, the famous Victorian writers of comic operas that satirized the aesthetic movement of the 1870s and ‘80s and all that went with it: fads, vanity, and pretentiousness.

Mary, an Irish-Catholic widow, looks after Whitman.  When the tall and handsome Wilde arrives at Whitman’s humble and overcrowded home, he is all done up with his famous fur coat and pantaloons, looking like a Victorian male Madonna at a gala.  However, Mary doesn’t believe in externals.  “The crowd seemed more impressed with his appearance than his speech,” she says.

Whistler’s Mary has a fine eye for different layers of reality: “You know the paper says he lives ‘on beauty alone.’ All he asks for lunch is a glass of water for the posy he carries about.” Even when Whitman tries to explain to her the “L’art pour I’art” or “art for art’s sake” concept and Wilde’s Pre-Raphaelite Brotherhood aestheticism, she doesn’t buy it.  “Suppose I were to make a pie for you, Mr. Whitman, and instead of cutting you a slice told you that ‘Oh no — this pie is not for the eating.  It is ‘complete in itself.’ I made it for the purpose of being a beautiful, aesthetic pie.’”

Mickle Street doesn’t fall into the trap of lionizing Wilde or Whitman. Mary makes it quite clear that “for all your fine words and flowers I know you for what you are, Mr. Walt Whitman: a trouble to man and woman both.” Whitman, unafraid of her, also has a few choice terms of endearment for her, “Mary, don’t be a stubborn old goat,” or “She’s a skittish trout when she’s of a mind.”  While she may not always understand the man whom she observes from her prim and proper perspective, she nevertheless serves as a balancing force throughout the play.

Audiences in Britain and the US at the time laughed at Wilde, the talented but attention-craving poet — the way Americans today make fun of the not so witty Paris Hilton and the Kardashians.  Unfazed, Wilde loves playing the role of the enfant terrible — dressed to the hilt, posy in his lapel.  In Whistler’s adaptation, Wilde even encourages the attention: “I want to shock.”

Whistler imagines a conversation between two writers: Whitman, with all his foibles, clearly has the upper hand, while Wilde’s verbal dancing doesn’t get him anywhere, except the awareness that, perhaps, there is more to life than theatrics and striking up “battles in this revolution for the Science of Beauty.”

Wilde, the dandy, throws out more than aesthetic pronouncements. There are moments when he touches on the untouchable: “We do not wear our sins as we wear our cloaks. Those we keep in a closet.”

Whistler’s Mickle Street presents some intense moments between those two men who were considered to be fluid in their sexuality, and were punished for their writing and their lifestyle—Whitman, by being denied a paid position at a hospital during the Civil War, and Wilde being sent to jail.

Friedman implies that both Whitman and Wilde were publicity hounds—with Whitman even writing enthusiastic, albeit anonymous, reviews about his controversial masterpiece, Leaves of Grass. These two writers were quite a match in their desire to reach as wide an audience as possible. “Cultivating newspaper coverage and meetings with American literary giants, the tour made Wilde the second best-known Brit in the country after Queen Victoria, despite having published almost nothing,” as Kevin C. Shelly points out.

Whitman, overwhelmed by Wilde’s many statements, mixed in with his compliments, blurts out, “You have thrown more ideas at me in an hour than fifteen other men I might know. You are smart, and you see something. But you have to stop staring all mooney eyed at ancient ruins. You no more live in an ancient temple than I do. You want to live in the world—live in the world.”

Whistler’s new play, based on historical facts and imagined conversations between two famous writers (the Walnut Street production was directed by Greg Wood and starred Daniel Fredrick as Oscar Wilde and Buck Schirner as Walt Whitman), opens new doors, shows an insecure young Wilde who seems to hide behind “aesthetics and art” while Whitman teaches Wilde more than he might have bargained for, advising him, “Go see America. Go see the world. Find out what creature you are. And for all the frippery—be honest. With us, and with yourself.”

Mickle Street ended its run at Philadelphia’s Walnut Street Theatre on March 8.  With any luck this tale, which involves one of New Jersey’s most famous artists, will see a production in the Garden State in the future.