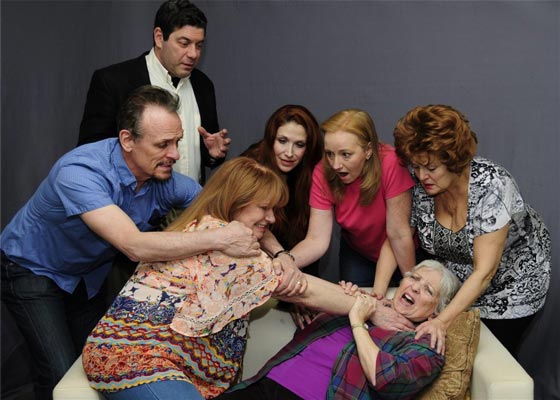 (Oradell, NJ) -- Hilarious, provocative and moving are three words often used to describe a theater piece. What’s unusual is to find a show that easily warrants all three. “August: Osage County”, to be presented by the Bergen County Players, is that rare play, a true American masterpiece. The New York Times called it “… a ripsnorter full of blistering, funny dialogue, acid-etched characterizations and scenes of no-holds-barred emotional combat”, comparing its matriarch, Violet Weston, favorably to Amanda in “The Glass Menagerie” as a manipulator, Regina in “The Little Foxes" as a tactician and the soused Martha in “Who’s Afraid of Virginia Woolf?" for the sharpness of her tongue.

Director Dottie Fisher remembers the experience of seeing the show on Broadway as “absolutely startling.” She marveled at the play’s layers and the rich roles it presents for women who must deal with mother-daughter relationships, alcoholism and drug addiction. The show will run Fridays and Saturdays at 7:30 pm and Sundays at 2:00 pm from March 21st - April 18th with the exception of Easter weekend April 3-5. "August: Osage County" contains mature language and adult themes and is not recommended for pre-teens.

The darkly comic “August: Osage County” won the Pulitzer Prize for Drama and the Tony Award for Best Play of 2008 for its author Tracy Letts, and four other Tonys including Best Actress and Best Supporting Actress. He based it in part on his own family’s tragedies and his drug-addicted mother.

The family of matriarch Violet Weston (Rollin Gardner of Closter) converges at the family home where she’s a grudging patient to her caregiver Johnna (Paulina Quinones of Elmsford, NY) when her husband, Beverly (Frank Osmers of Haworth) disappears. Other family members quickly arrive, including daughters Ivy (Debbie Zika of Hillsdale), Karen (Nina Lionetti of Westwood) who brings along her boyfriend Steve (Howell Mayer of Saddle Brook), and Barbara (Joanne Lamneck of River Edge) with her now-separated husband Bill (Clifton Lewis of Closter) and teenage daughter Jean (Kristin Bennett of Montville) in tow. Adding to the chaos is Violet’s sister Mattie Fae (Rachel Gordon of Paramus) and her husband Charlie (Roy Harry of Upper Saddle River), accompanied by their grown son Little Charles (Andrew Whitney of Ramsey). The local sheriff (Neil Kahn of Maywood) also checks in with reports on the search for the missing Beverly. To say that sparks fly and secrets are revealed is a gross understatement.

With its cast of 13, the production presented an exciting challenge to Director Fisher and to set designer (and professional architect) Steve Moldt, who designed a three-level home without walls to give all the actors the room they need in this provocative, maturely-themed award winning drama.

•        “August: Osage County” contains mature language and adult themes and is not recommended for pre-teens.

•        All performances for “August: Osage County” take place at The Little Firehouse Theatre at 298 Kinderkamack Road in Oradell, home to the Bergen County Players since 1949. Due to the play’s length of nearly three and a half hours, performance times have been pushed up on Fridays and Saturdays to 7:30 pm, while Sundays remain at 2 pm.

•        Tickets for “August: Osage County” are $21 for Friday/Saturday performances and $17 for Sunday matinees, and can be purchased online at www.bcplayers.org, by calling 201-261-4200 or by visiting the box office at 298 Kinderkamack Road in Oradell during regular box office hours. Visa, Master Card, and American Express are accepted.

•        BCP's popular Questions & Artists talkback session will be held following the performance on Friday, March 27th. The session is included in the cost of the ticket to that performance.

•        Those interested in Group Sales of 20 or more tickets can email groups@bcplayers.org or call the main number and press #6.

•        Advance discount tickets for students age 25 and under with proper ID are available for $14 by phone or walk-up only, and student rush seats can be purchased for $5 (cash only) starting 30 minutes before curtain at every performance, pending seat availability. There is a limit of one rush ticket per student.

•        Parking is free at the Park Avenue municipal lot, across the street,one-half block north of the theatre.

The Bergen County Players has grown tremendously from its roots as a small community theater when it was founded in 1932; today, more than 300 volunteer members, working on and off stage, make possible the nine productions presented each season.

Further information can be found at www.bcplayers.org.