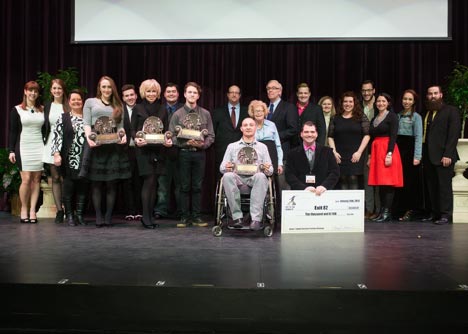 And the winners were:

And with over 7000 votes, Hooper Avenue Elementary School won the $500 GoPro Voucher for the Viewer's Choice Award.

Jeremy Grunin, Executive Director of the Jay and Linda Grunin Foundation surprised everyone when he asked the students from Hooper Avenue to stand up. Jeremy stated, "The $500 GoPro Voucher won't adequately thank the real talent in the video, the kids!" Jeremy continued, "So would you guys mind if we throw a pizza party for the whole school?" The students erupted with contagious excitement!

Jay Grunin, Co-Founder of The Jay and Linda Grunin Foundation, stated "It has always been Linda and my hope and intent to bring some of New York City's magic to Toms River, our home since the first day of our marriage 45 years ago. We are just thrilled to see first-hand and acknowledge the talent and community spirit shown in this, our first Engage Toms River endeavor."