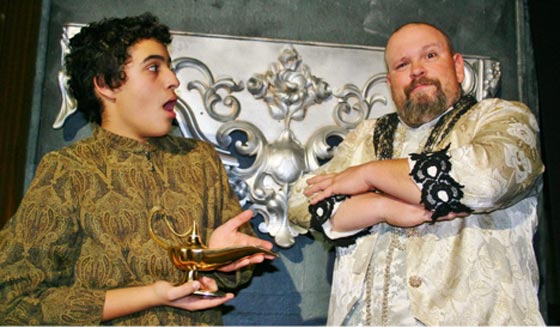 (CRANFORD, NJ) -- It's a fantasy we've all had: What would happen if we if we could have a way or person to give us exactly what we wished for? Some versions of the story grant the hero only three wishes, others an unlimited supply of magical wish lists which could come in extremely handy, especially at this time of year. However, does having this ability to get anything you want really bring you the contentment you deserve or does it make your life even more complicated? Now running at Cranford Dramatic Club in Cranford, NJ is one of the most famous takes on the genie legend, "Aladdin", one weekend only December 5-7. However, this version takes a different slant on the story by moving the action from the traditional sands of Arabia to a Far East Chinese kingdom.

Here, a stage manager breaks the fourth wall striking a gong and introduces the familiar story from the "Arabian Nights" however within the style of Chinese Theatre scenery and setting flows to and fro with the help of his two assistants. The story moves to the capital city of China where we find Aladdin living with his poor father. Aladdin wants nothing to do with his father's trade and only continue his own interests, which includes flying a kite. One day while out flying the kite Aladdin loses control and it goes over a palace wall and unwilling to lose his prized possession, he scales the wall. Inside he meets the beautiful Mei-Ling who informs him that all trespassers are beheaded. Aladdin's not really phased by this and Mei-Ling is taken by his confidence. Soon the new lovebirds are interrupted by Mei-Ling's father who wants her to marry a wealthy suitor, an interest not shared by Mei-Ling. To cheer up Mei-Ling, Aladdin offers up his only possession, his kite and leaves. However, Aladdin is so taken with Mei-Ling that he vows to become the richest man in China so he can marry her.

Meanwhile a magician arrives with a plan to capture a mystical power but need a boy to complete the quest. He poses as a long lost uncle to take Aladdin along and soon the pair set out on this quest to a forbidden cave full of spirits. Aladdin must venture into the cave alone but not touch any treasure but only take a strange lamp. Aladdin instead collects as much treasure as he can grab and the lamp. As he exits, the Magician is angered that he can't get the lamp due to all the treasure in Aladdin's hands and seals him in the cave vowing to return for the lamp. Dumbfounded at being trapped, Aladdin begins to rub some of the treasure and the lamp and the Genie appears. Genie, grateful to be freed from the lamp frees Aladdin, grants him riches and a palace to woo Mei-Ling and even a gift for the emperor in the form of Fatima, the dancing doll. Now armed with everything he needs, Aladdin makes for Mei-Ling but the Magician is in pursuit. Will Aladdin's new found riches and power work to win Mei-Ling? Will he be able to keep ahead of his "uncle" the mad magician? Find out in this fun musical romp sure to please the whole family.

Director Gira Derise-Weaver loved this version of the Aladdin as it provided a fresh take on a familiar story in a scaled down story teller type of theater. "The story of Aladdin is truly timeless. We all strive for wealth and success in our lives just as Aladdin does. However, we do not have the magical means to help us make it happen. I like this version of Aladdin because it is the familiar story, but with a different setting and some different characters. It is set in the Great Capital City of (Ancient) China. The Genie and the Evil Magician are the only Arabian characters in the piece. It also allows for great creativity as everything is transparent. We see set changes and props being delivered. We are told by the Stage Manager what is happening and hardly anything is hidden from the audience," said Derise-Weaver.

"From day one, the cast was brought in on the secret that we are not mimicking any of the Disney characters. And they came along for the ride! We have created our own interpretations of the characters in this version, the Princess, the Magician, and even Aladdin. This show was selected before the passing of Robin Williams, so if you look and listen closely enough you will see and hear a few homages to his interpretation of the Genie," she added.

On some of her favorite moments from the show, Derise-Weaver said, "I personally enjoy the Character of the "Stage Manager" and his interaction with both the actors on stage as well as the audience to assist in telling the story. The opening number "Flying My Kite" is a great piece for Aladdin and his urchin friends. It expresses the pure joy of a young man and his hobby of kite flying. It definitely is a reminder of a simpler age (before technology!). This version also fleshes out the character of Aladdin's mother, much to the delight of the audience, I can assure."

"Both children and adults alike can take away a great message from this show. It is also summed up by the Stage Manager at the end of the piece. No matter what we have or do not have, if we have love (of family, of a significant other), our life is complete. I would like to add that we had a great outpouring of local talent for this production. It is great to see so many Union County, and Cranford in particular, residents performing at the CDC," Derise-Weaver added.

About Cranford Dramatic Club
Founded in 1919 by a group of Cranford citizens eager to share their love of theatre, we are proud to be the longest operating, non-professional theatre group in the state of New Jersey and, with a 300 seat auditorium; we are also one of the largest. The CDC's first home was the Sherlock Hall of the historic Trinity Episcopal Church in Cranford. In the 1920's the theatre productions moved to the Cranford Casino which was located in what is now Hampton Park. After WW II many of the shows were produced at the Cranford High School. In the mid-1950's, a group of members decided that the theatre needed a permanent home of its own and construction began on the building that would become the CDC Theatre on Winans Avenue in Cranford. The theatre officially opened to the public in 1957. Fundraising efforts in 2005 allowed the theatre and its facilities to become completely handicapped accessible, making it possible for more local senior citizens and disabled individuals to attend live theatre

The CDC Theatre is a volunteer run theatre and a registered 501©3 organization with a mission to present quality and affordable live theater to New Jersey residents, to develop the talents of members in both the performance and technical aspects of theatre, and to stimulate community interest in theatre.