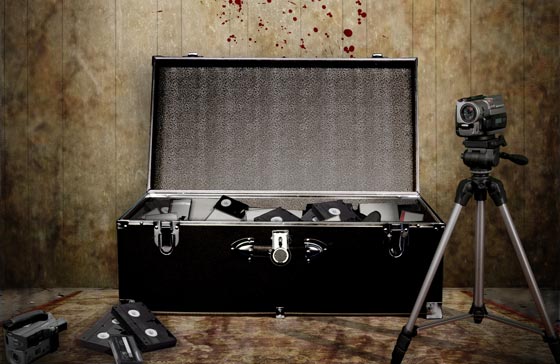 Filmmaker Jack Thomas Smith moved to Sparta, NJ as a teenager. It was there that he discovered the films of George A. Romero, Stanley Kubrick, Brian DePalma, and John Carpenter. His latest work, Infliction has several screenings in the area in October and November and is making its way around the festival circuit. New Jersey Stage spoke with Smith about the film and what led him into the horror genre.

What is the story of Infliction?
Infliction is a disturbing assembled footage film that documents a murder spree committed by two brothers in North Carolina in 2011... and the horrific truth behind their actions. I'm not giving anything away by saying this... Infliction deals with the long-term effects of child abuse. As you watch the film, you'll find yourself asking who are the true criminals here and who are the true victims.

Tell me about the "found footage film" genre. Is this something that started with The Blair Witch Project or was that just the first famous one?
It pretty much started with The Blair Witch Project. Their marketing campaign was absolutely brilliant. We're marketing "Infliction" as "assembled footage"... I'll explain the difference... "Found footage" implies just that... Someone found the actual footage that was left behind by the victims, which is how they marketed The Blair Witch Project. It was accidentally shot. Now "assembled footage" means that the movie is more of a documentary that was shot for a specific reason and the footage has been assembled for storytelling purposes. With Infliction, the brothers purposely documented their actions and the reason behind their murder spree.

You've had a couple of screenings already, what was the response to the film?
So far it's been very positive. "Infliction" opened in select theaters in March of 2014 (and was released on DVD, VOD, and Digital HD on July 1st by Virgil Films & Entertainment.) The film has received a lot of great reviews and the feedback from fans on Twitter has been amazing. We've had screenings in East Stroudsburg, PA; NYC; Lake Hopatcong, NJ; Blairstown, NJ; Norfolk, VA; Washington, NJ; Pittsburgh, PA; and Scranton, PA. After each of the screenings, I've hosted Q & A sessions and they've been pretty intense. Infliction seems to be connecting with women... especially moms. The moment you bring child abuse into the equation, you'll see moms get fired up.

We've added a number of screenings at theaters and horror conventions that will run until the end of the year. The screenings have been a great way to generate word of mouth and to connect with the audience. We'll be screening at the Chiller Theatre Expo in Parsippany, NJ on Friday October 24th and Saturday October 25th at 10pm both nights; the Horror Happens Film Showcase in Lake Hopatcong, NJ on November 8th; Grindhouse Nights at Café Z in Union, NJ on November 14th; the Days of the Dead horror convention in Chicago, IL on Saturday November 22nd at 5pm; and the Walker Stalker Con at the Meadowlands Expo Center in Secaucus, NJ in December.

How did you get your start in horror? What were some of your favorite horror films?
When I was a teenager, I worked at a video store in Sparta, NJ. A customer by the name of Lee Estrada would come in and rent horror movies all the time. Needless to say, Lee and I would talk about horror films and we became friends. At that time, I had just started working on my first screenplay, which was a horror script, and I told Lee that. Lee said that his friend, Ted Bohus, made indie horror films and lived locally in NJ. He gave me Ted's information and told me to reach out to him when I was done writing it. As soon as I finished writing it, I contacted Ted and sent him my script. He read it, liked it, and suggested we work on a screenplay together. He felt the budget for the screenplay I wrote would be too large to shoot as an indie. So Ted and I co-wrote The Regenerated Man and raised the financing to shoot. Ted directed it and I worked with the crew so I could learn. When we completed the film, we were able to secure distribution with Arrow Entertainment and doubled our investment.

After that, I met John Russo at a horror convention in NYC. John wrote and produced the original Night Of The Living Dead, which is one of my favorite films. So it was cool to meet him. I was able to raise the financing for a film he wrote called Santa Claws, which was about a guy dressed in a Santa Claus costume going around killing people. I learned a lot on this project as well and we secured distribution with EI Independent.

After working with Ted and John, I took what I had learned from them and applied it to my next film "Disorder", which I wrote, produced and directed.

What do you like about horror films? Do you like the gore or the tension before the gore?
I'm a huge fan of horror movies. Always have been. I love horror films that build tension and suspense and keep you on the edge of your seat. I'm not a fan of torture. I can't stand it. I'm not a fan of gratuitous gore. When I watch a horror film, or any film for that matter, I want to see a strong story with strong characters. When you connect with the characters and get lost in a story that keeps you guessing, you want them to survive that much more. In my opinion, gore works when it's part of the story. John Carpenter's The Thing is a perfect example of strong characters, a suspenseful story, and incredible effects and gore. It's a perfect film.

Some of the wilderness areas around Sussex County where you grew up could make for great horror films. Have you ever shot around there?
I have. I shot my last film, Disorder, in Blairstown and the NJ side of the Delaware River out by Millbrook Village. We also shot up in the Poconos. It was amazing shooting in the NJ rural areas. Most of our shooting was done in a 300 year old abandoned house that was surrounded by woods out by Millbrook Village. The house was owned by the National Park Service and they were amazing to deal with. Most of the woods scenes in the movie were shot next to that house... We ran feeder cables into the woods from the house to power our lights. We almost had our own studio back lot out there.

If you could be a horror filmmaker in any era which era would it be?
Definitely the 1970s and early 1980s. The horror filmmakers during that time period were the best ever... Wes Craven, John Carpenter, Stanley Kubrick, Brian DePalma, George Romero, and Tobe Hooper to name a few. The horror films during that time period were dark and gritty... My style of filmmaking completely... Halloween, The Thing, Carrie, The Shining, The Texas Chainsaw Massacre, Friday the 13th, Nightmare on Elm Street, Dawn of the Dead, The Exorcist, The Hills Have Eyes... I can go on and on and on... Not only were these films terrifying... But they had great stories and characters you cared about. I would have loved to have been a part of that filmmaking time period.