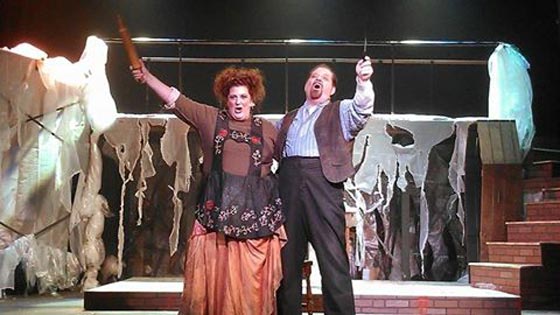 (CRANFORD, NJ) -- Black comedy is an interesting sub-genre in that its neither full out drama and not a feel good comedy. A story that usually deals with murder, crime, and lots of blood but leaving the viewer amused and giddy by the gory entertainment is a tough balancing act but has been embraced from Shakespeare to Quentin Tarantino. Revenge and murder served up with an acerbic spice is on show with "Sweeney Todd, the Demon Barber of Fleet Street" at the Cranford Dramatic Club running from October 17-November 1. The Victorian legend of a barber that gave his customers too close of a shave and um, "recycled" their bodies was given the Broadway treatment by Stephen Sondheim in 1979 and has been a staple production of theaters ever since.

Its 1846 and Sweeney Todd (Alex Oleksij) was recently rescued at sea by a young sailor named Anthony Hope (Mathew DeMarco) and brought to London. As Todd gets his bearings a local prostitute seems to recognize Todd which leads Todd to tell story of a young barber who was exiled by a corrupt judge so he could take the barber's wife. The story is recounted in the song "The Barber and his Wife". Anthony and Todd arrive at a meat pie shop run by Mrs. Lovett (Melissa Timpson). When Todd inquires about the apartments above the shop, Mrs. Lovett recounts a similar story of a wrongly accused barber. However, she goes on to say that the wife killed herself after being lured by the judge's accomplice named Beadle (Jay Winston) and raped. The couple's infant daughter Johanna (Kate Pfuhler) became a ward of the corrupt Judge Turpin (Walter Zimmerman).

Todd's reaction to the story affirms Mrs. Lovett's suspicion that Todd is actually the exiled barber, Benjamin Barker. Todd comes clean and swears revenge on the Beadle and Judge Turpin. Mrs. Lovett mentions that his old implements are still above the meat pie shop and Todd decides to take up his old profession. Meanwhile Anthony develops a crush on Johanna, however, Judge Turpin has designs to marry Johanna himself. Anthon seeks the help of Lovett and Todd to woo and elope with Johanna and Todd wants to reunite with the daughter he never knew.

The reunion plan goes slightly awry by the arrival of Pirelli (Jeff Fiorello) who was actually an assistant to Todd back in his barber days and he attempts to blackmail his old boss. In order to keep new set up secret, Todd kills Pirelli and with the assistance of Mrs. Lovett look to dispose the body by chopping it up and baking it into her meat pies. Judge Turpin arrives not knowing who Todd is and is almost dispatched by Todd but narrowly escapes thanks to Anthony. As Lovett and Todd plot their next moves, the pie shop becomes a runaway success due to the new "secret ingredient" in the pies. To keep up for the demand, Todd develops a method of killing his customers and provide Lovett the secret ingredient.

The new business partners try to avoid detection by Pirelli's friend Tobias (Zack Mazouat), oversee Anthony's attempt to rescue Johanna and exact revenge on the judge all the while Mrs. Lovett conceals a secret from Todd. The final secret adds just the right level twisted comedy to this already twisted story. "This is the first time Sweeney Todd has been produced a CDC . I saw the show for the first time when I was in high school and was immediately hooked not only on Sondheim, but on musical theatre. It is a musical thriller and the concept for our production has amped up the fear factor to give the audience that scary thrill that goes along with the Halloween season," said director Alan Van Antwerp. "It is the perfect time of year for this show. Sweeney Todd does a great job of keeping the audience on the edge of their seats while luring them in," he added.

On tackling the show's challenging song and story Van Antwerp said, "Our cast is a mix of performers who are new to the CDC stage and some who have appeared here often. It is a very demanding show vocally and dramatically. Luckily we have an incredible production team and cast who has made this a great experience all around and are ready to offer our audiences a wonderful show."
"The most important thing for the audience to take away is that your imagination can take you to scarier places than you could ever anticipate," he said.

History
Founded in 1919 by a group of Cranford citizens eager to share their love of theatre, we are proud to be the longest operating, non-professional theatre group in the state of New Jersey and, with a 300 seat auditorium, we are also one of the largest. The CDC's first home was the Sherlock Hall of the historic Trinity Episcopal Church in Cranford. In the 1920's the theatre productions moved to the Cranford Casino which was located in what is now Hampton Park. After WW II many of the shows were produced at the Cranford High School. In the mid-1950's, a group of members decided that the theatre needed a permanent home of its own and construction began on the building that would become the CDC Theatre on Winans Avenue in Cranford. The theatre officially opened to the public in 1957. Fundraising efforts in 2005 allowed the theatre and its facilities to become completely handicapped accessible, making it possible for more local senior citizens and disabled individuals to attend live theatre.

The CDC Theatre is a volunteer run theatre and a registered 501©3 organization with a mission to present quality and affordable live theater to New Jersey residents, to develop the talents of members in both the performance and technical aspects of theatre, and to stimulate community interest in theatre.

Sweeney Todd, The Demon barber of Fleet Street
Music and Lyrics by Stephen Sondheim
Book by Hugh Wheeler
Based on the play by Christopher Bond