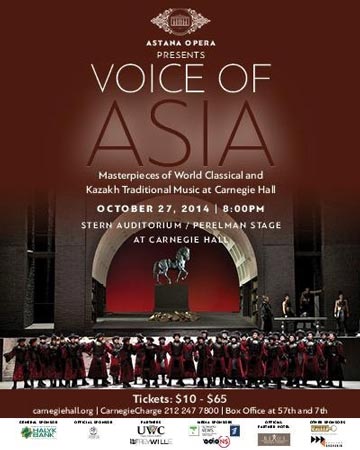 (New York City, NY) -- The Astana Opera will debut in New York City on Monday, October 27th at 8:00 PM in the Stern Auditorium/Perelman Stage at Carnegie Hall. The program entitled "Voice of Asia" will include a special selection of Kazakh folk songs, solos from operas by Kazakh composers Zhubanov-Khamidi, Rakhmadiev and Mukhamejanov, arias from operas by Rossini, Verdi, Bernstein, Offenbach, and Borodin, and the Tchaikovsky Violin Concerto featuring brilliant young violinist Erzhan Kulibaev. The evening's Conductor is Abzal Mulhitdinov. Tickets are $10-$65 and can be purchased by visiting www.carnegiehall.org, calling CarnegieCharge 212.247.7800 or at the box office.

This program was created to celebrate the uniqueness of the Astana Opera Symphony Orchestra under the leadership of musical director Abzal Mukhitdinov. Comprised of virtuoso musicians, the orchestra's repertoire includes not only opera music, but also difficult orchestral works. Cultural staples of the program include the orchestral scherzo "Qudasha Duman", Aidar's aria from the opera Abai by Zhubanov-Khamidi, and music from contemporary Kazakh composers such as as Tolegen Mukhamejanov. Covering a wide range of genres, these pieces illustrate the life and culture of the Kazakh people.

Part I will consist of vocal symphonic music. This part of the concert will feature the orchestral scherzo "Qudasha Duman" written by the outstanding Kazakh composer Ye. Rakhmadiev, that demonstrates the particular musical traditions of Kazakhstan. "Qudasha Duman" is traditionally performed during Kazakh wedding ceremonies, when the bride comes to the groom's house for the first time as his future wife to meet with his friends in joyful celebration.

* The program will feature the dombyra and qobyz, the ancient folk instruments of the Kazakh people. "Tugan Zher" is a brilliant example of romantic melodies. With a synthesis of symphonic music and traditional Kazakh instruments' sounds (such as dombra, shan-kobyz and kobyz), audiences will be transported to the vast expanses of the Kazakh steppe
* Singer Medet Chotabaev, a well-known favorite among Italian audiences who is also regarded as Kazakhstan's premiere tenor, will perform Aidar's aria from the opera Abai by Zhubanov-Khamidi, which is generally considered the finest Kazakh opera written in Kazakh language. A tragic story about love, marriage, death and envy, Abai is one of the first fundamental Kazakh operas written nearly seventy years ago
* Zhupar Gabdullina, whose impressive lyric-dramatic soprano captivated the audience at the Mariinsky Theatre, will perform the part of Odabella from Verdi's opera Attila
* Sundet Baygozhin, the acclaimed baritone and winner of the contest at Arena di Verona, will perform Figaro's cavatina from Rossini's opera The Barber of Seville
* Regarded as the major soprano and mezzo-soprano at the Astana Opera House, Aigul Niyazova and Dina Khamzina will perform the Barcarolle duet from Offenbach's The Tales of Hoffmann
* Alfiya Karimova will perform Kunigunda's aria from Bernstein's Candide in English;
* The Astana Opera Choir will perform the Traditional Spiritual Elijah Rock.

A symphony concert will be presented in Part II. Violin virtuoso and winner of the international Wieniawski Competition Erzhan Kulibaev will play Tchaikovsky's violin concerto.

The magnificent, state-of-the-art Astana Opera House was founded in 2013 and established itself from the outset as a major, progressive force in Central Asia. The Theater is located at the crossroads between East and West and its repertoire combines national traditions and masterpieces of the world classics.

To date, 16 memorandums of cooperation were signed with leading theaters including San Carlo Theater, the world's most ancient theater. The organization now consists of 136 orchestra musicians, 93 choir performers, internationally hailed principals, and the dance ensemble.