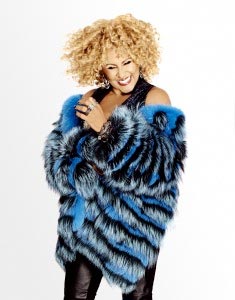 Special features include:
Fine artists are located between 2nd & 3rd Sts. (both sides), 5th & 6th Sts. (North, East side), and artists from the Monroe Center for the Arts bet. First & Newark Sts. (North, East side), so if you are an art collector, these are the locations you will want to explore first. Oil paintings, watercolors, acrylics, sculpture, mixed media, photography, etc.

Food: Lots of great food throughout the fair. Hoboken restaurants will set up street cafes offering an eclectic variety of international foods such as: Thai, Indian, Greek, French, Mexican, Cajun and Italian.

Washington Street will be closed from 6am to 9pm between Observer Highway and 7th Street. During this time, NJ TRANSIT Bus No. 22 (North Bergen-Union City-Hoboken), No. 89 (North Bergen-Hoboken) and No. 126 (Hoboken-New York) will operate on a detour.

Schedules are tentative and subject to change.

Through the years, Darlene Love continues to captivate audiences worldwide with her warm, gracious stage presence & sensational performances. When she was inducted into the Rock & Roll Hall of Fame in 2011, it was just another accolade in a long ongoing career. While still in high school (1957) she was invited to join a little-known girl group called The Blossoms, who in 1962 began working with producer Phil Spector & his wall of sound hit factory. Her powerful lead vocals have been part of Number One records such as ("He's A Rebel" for the Crystals) as well as many chart hits ("He's Sure the Boy I Love", "Why Do Lovers Break Each Others Heart?", "Today I Met The Boy I'm Going To Marry") & the perennial Christmas favorite "Christmas (Baby Please Come Home)", which she has performed annually for the last 27 years on The Late Show with David Letterman.

As back up singer, with The Blossoms, Love contributed backing vocals behind many of the biggest hits of the 1960s, including, The Ronettes' "Be My Baby", Shelley Fabares' "Johnny Angel", Bobby "Boris" Pickett's "Monster Mash", Frank Sinatra's version of "That's Life", the Righteous Brothers' "You've Lost That Lovin' Feelin'." and the Crystals' "Da Doo Ron Ron". The Academy Award winning documentary "20 Feet From Stardom", released in 2013, tells the story of Darlene Love and other classic back up singers. But this was not her only foray into film. She also played Danny Glover's wife in all the Lethal Weapon films. She also appeared on Broadway in hits like Hairspray and Grease and even starred as herself in Leader of the Pack (based on the Ellie Greenwich songbook), credited as Broadway's first jukebox musical. She is currently in the studio working on a new CD with E Street Band member Steve Van Zandt and a bio pic called "My Name is Love," is expected to air on the Oprah network in 2015.

Rolling Stone Magazine has proclaimed Darlene Love to be "one of the greatest singers of all time" and that certainly rings true.

The Sensational Soul Cruisers
They're not just another 11-man vocal harmony group with horns. It is unlikely you will ever find a band performing with as much energy, passion, and talent. Under the tutelage of Jackson sax player Screamin' Steve Barlotta, the captain of this fantastic soul cruise for over 20 years, he has captured the essence of the Jersey Shore sound and its R&B roots.

The Harmonica Lewinskies
This is the type of band you'd bring home to your momma and in two months time, your momma would be dating them. Over the past 5 years, they have amassed a dirty cornucopias of influences ranging from Delta Blues, to molten Rock and Roll, to the art of seduction. The Harmonica Lewinskies are an 8-piece NYC based blues and soul band. They have played at the 2012 & 2013 CMJ, Northside & CBGB festivals. Last summer they held a month long residency at Piano's in Manhattan's Lower East Side.

Allison Strong
Two-time Hoboken Music Award Winner Allison Strong released her debut album, March Towards The Sun, on August 31st to a standing room only crowd at New Jersey's prestigious Bergen PAC. In addition to playing well-received solo sets at New York City's Rockwood Music Hall & Pianos, she has opened for headliner Teddy Geiger, performed for former Colombian President Alvaro Uribe, and has appeared on stage at the White House, the Metropolitan Opera, and on Broadway in Bye Bye Birdie and Mamma Mia.

Maddy Bowes
Maddy earned her way as a singer and songwriter with solid maturity gained from a professional entertainment background. Club dates at The Bitter End and a role in Broadway's Billy Elliot – for 700 performances! – are a few of her creds. A fresh faced 16 year old out of Hoboken NJ, ready to strike. The soulful prowess is vocally and lyrically unique, real and honest, and wise beyond her years. Maddy Bowes has a voice that's fierce, yet full of grace when she peels off the wool and takes off the gloves. She debuts with self-composed, musically addictive breakout songs that smash the heart.

Erin Lee & the Up Past Bedtime Band
Get ready to hop, holler and sing along with funky songs about baseball and boating, it's perfect for anybody not-quite-ready-for-bed on a summer evening. Erin Lee Kelly is an award-winning songwriter whose children's music has received rave reviews ("Irresistible!" -Disney's Family Fun Magazine) and radio play from Massachusetts to New Mexico. The Up Past Bedtime Band are New York City musicians who can usually be found up well past bedtime playing everything from country music to punk in many of NYC's top venues. Together, they create fabulously interactive music for families featuring intricate harmonies, groovy drumming and silly songs about the everyday challenges of childhood.

Emily & the Ideals
A true Hoboken original, Emily Turonis was born and raised in the square mile where she got her education in American music: Jazz, Blues and Soul. But Emily and the Ideals is also heavily influenced by the musical traditions of Brazil, Cuba and Spain and beyond. This group explores Fusion-Everything. They bring together many genres while holding down a constant sound, thanks to Paul Maurice Steinman directing the group on guitar. Their repertoire features a mix of original material, lesser known tunes from across the world, and some old favorites spanning the 20th Century.

Hoboken School of Music
Experience the energy of the Indian hand drums tabla as they come alive in the hands of the young & talented students of Taalim School of Indian Music, a partner of Hoboken School of Music. The rhythmic backbone of north Indian music, tabla is the most popular percussion instrument from India, whose sounds can be heard in everything from traditional Indian music to hip hop and pop songs like Selena Gomez's "Come and Get It". The quartet will showcase classical tabla compositions as well as vocalizing some compositions (Indian version of scatting). For more info, visit www.taalim.com

Jason Didner & the Jungle Gym Jam
An award-winning "kindie" band that brings a true rock-n-roll spirit to songs that emphasize kindness, active play, imagination & love of learning. The band's debut album "Everyone's Invited!" was honored with the Parents' Choice® Approved seal & named CD Baby Editor's Pick as it entered the online music retailer's top 10 kids/family album charts. Based out of Montclair, NJ, they have been compared to "Elvis Costello in a particularly good mood." The band performs a lively & interactive concert with lots of call-and-response, & opportunities for young audience members to portray the characters in the songs using the puppets the group provides. Prior to forming the Jungle Gym Jam, Jason scored a YouTube and radio hit with "You Can't Get There from Here in Jersey," a comedy song that was featured on NPR's Car Talk.