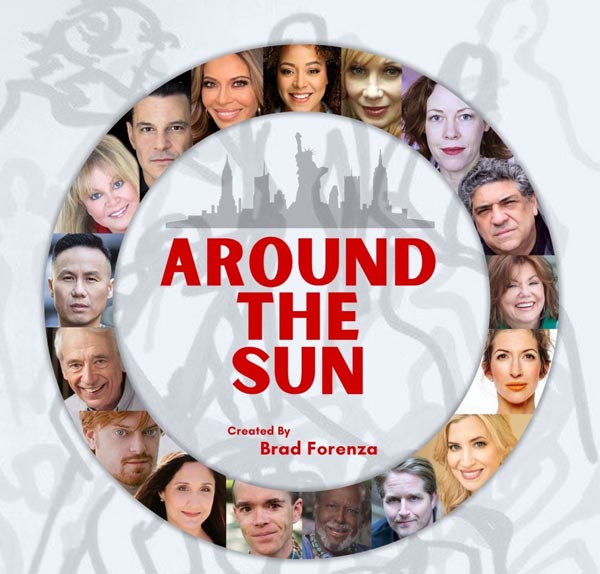 (NEW YORK, NY) -- Brad Forenza, a writer from Jersey City, launched Around the Sun, a new episodic audio drama podcast on the Broadway Podcast Network. Featuring prolific talent from stage and screen, including winners and nominees of every major performance award (Drama Desk, Emmy, Golden Globe, Grammy, Oscar, Screen Actors Guild, and Tony). The podcast launched on on October 27, 2021 and will have new episodes throughout November.

Around the Sun is nine self-contained episodes that explore human connections, made and missed, with an existential New York flare. Whether consumed together or independently, the comedy, tragedy, and soul of Around the Sun embraces one character’s assertion that, “We’re never alone in New York… even if it feels like the opposite is often true.” The series was produced in quarantine, via remote technology.

“Around the Sun is a valentine to a city I love, and the transcendent themes that unite us,” says series creator Brad Forenza. “It’s also a celebration of possibility, created amidst the pandemic’s destruction.”

Cast member François Clemmons (a Grammy winner for Porgy and Bess) agrees. “When Brad Forenza invited me to portray the role of a NYC Marathoner, metaphorically running through each stage of life, we had never met,” says Clemmons. “And still, there was something connecting us—a theme that recurs throughout the episodes.”

In spite of the remote recording necessitated by the pandemic, Two-time Emmy winner Sally Struthers (All in the Family), added that remote production “was a breeze. I’m a big fan of Brad Forenza’s,” she quipped.

Around the Sun (#AroundTheSunPodcast) is a Best Version of Yourself production, written/directed by Brad Forenza, co-produced by Suzanne Ordas Curry (Equity) and Brian Dashew (Breaking Points), presented by Broadway Podcast Network. Listen to the podcast here.

Brad Forenza (Series Creator) is an award-winning actor/writer, whose artistic style blends observational humor and existential contemplation. His original films include: Awakening Arlene, Breaking Points, and The Lady Yang. His plays have been presented by Broadway Bound, Emerging Artists, Fresh Fruit, Gallery Players, The Hollywood Fringe, Primary Stages, and United Solo. He is the author of over 50 articles, a concept album (The Public Figure Songbook), and several books (including Vignettes, which provides the source material for Around the Sun).

Broadway Podcast Network is the premiere digital destination for everyone, anywhere, who loves theatre and the performing arts.  Provocative stories of all kinds are the cornerstone of the network. Presenting original, engaging, and immersive programming of theatre and theatre-adjacent podcasts, audio dramas, serials, parodies, live video events and more. With tremendously talented hosts, who are performers, producers, writers, industry leaders, and storytellers representing a wide variety of voices and perspectives. Broadway Podcast Network offers entertaining, inspiring, easily accessible and shareable content for everyone, may they be interested in behind-the-curtain access to the creative process, advice on everything from how to break into the business to how to audition, theatre history, candid interviews with their favorite stars, or just enjoying theater from the best seats in the house.