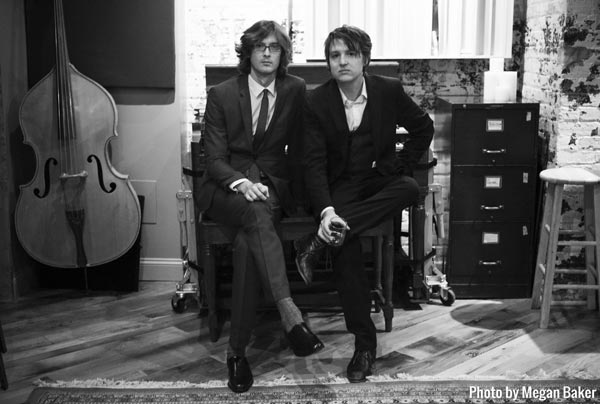 (SOUTH ORANGE, NJ) -- South Orange Performing Arts Center presents The Milk Carton Kids on April 9, 2022 at 7:30pm.  With pure tones, moving voices, entwined acoustic guitars and rootsy songwriting, The Milk Carton Kids know how to capture the quiet dynamics of a song to weave a spell that has been captivating audiences from coast to coast since 2011.

The three-LP box set includes the remastered original album alongside a selection of early demos and live performances, as well as a disc that traces the evolution of "Michigan" and "New York," two of the group's most popular songs. The box set also comes with redesigned artwork and metallic ink on a clamshell box, plus a 32-page booklet featuring archival photos and a retrospective essay by author Kim Reuhl.

Band members Joey Ryan and Kenneth Pattengale note, "We wanted to commemorate this milestone for anyone who has loved Prologue, of course, but also for ourselves. Those early days were such a blur, but we kept so much of it in iPhone recordings, posters, ticket stubs, tour laminates. Putting it all together got pretty emotional. This was the album that changed our lives."

Tickets for the show at SOPAC range from $35-$45 and are available for purchase online.

Founded in 2011, The Milk Carton Kids swiftly emerged as a major force in the American folk tradition, blending ethereal harmonies and intricate musicianship with a uniquely powerful brand of contemporary songcraft. 2013's ANTI-debut The Ash & Clay proved their national breakthrough, earning The Milk Carton Kids their first Grammy Award nomination for Best Folk Album. A second Grammy nomination for Best American Roots Performance followed in 2015 for the track "The City of Our Lady" from band's acclaimed third studio album, Monterey, and 2018's All The Things That I Did And All The Things That I Didn't Do was nominated for Best Engineered Album, Non-Classical.

Listening to The Milk Carton Kids, Joey Ryan and Kenneth Pattengale, talk about their creative process, it’s easy to imagine them running in opposite directions even while yoked together. “Joey and I famously have an adversarial relationship,” Pattengale says. They dig at each other in interviews and on stage, where Ryan plays his own straight man, while Pattengale tunes his guitar. The songs emerge somewhere in the silences and the struggle between their sensibilities. They have been known to argue over song choices. They have been known to argue about everything from wardrobe to geography to grammar. But their singing is the place where they make room for each other and the shared identity that rises out of their combined voices. Defying the conventions of melody and harmony is a strategy The Milk Carton Kids have consciously embraced. “Sometimes we’ll switch parts for a beat or a bar or a note,” Ryan says. “And that starts to obfuscate what is the melody and what is the supporting part because we think of both of them being strong enough to stand alone.”

“There are only so many things you can do alone in life that allow you to transcend your sense of self for even a short period,” Pattengale continues. “I’m the lucky recipient of a life in which for hundreds of times, day after day, I get to spend an hour that is like speaking a language only two people know and doing it in a space with others who want to hear it.”