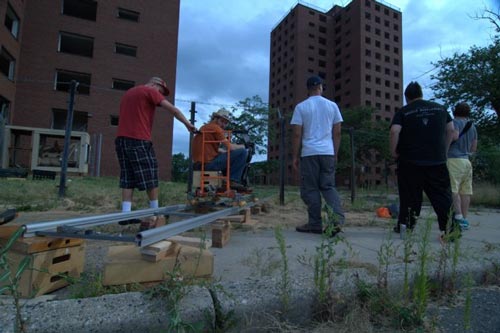 DEFORCE is a study of the political conflict that has suppressed one of the most diverse and dynamic cities in America. From New Deal housing policy to the modern Drug War the film focuses on the tools that divided the city economically and socially. Themes that are common in most cities, but the extremes shown make it uniquely Detroit.

The film feature's candid interviews from Detroit's foremost authors, historians and journalists including ML Elrick- a Pulitzer Prize winning journalist. Elrick's investigative reporting helped lead to the felony conviction of former Mayor Kilpatrick's and his recent indictment on charges of extortion and corruption. And with its 86 minute running time, the documentary is able to go beyond the headlines and reveal the history that fostered such corruption.

From Pastor's to Drug-Dealers the films interviewees pose diverse opinions about the causes and effects of Detroit's troubles. Combined with extensive archival materials and beautiful original footage, DEFORCE presents a captivating lesson on the historical divisions of American cities.

A Selection of the New Jersey Film Festival, DEFORCE screens one-time only- Saturday, February 5th at 7pm, Vorhees Hall (71 Hamilton St. in New Brunswick). This is the Film's only showing in New Jersey. The Director is scheduled to be in attendance to take questions from the audience.

You can view the trailer(s) and read more about the film by visiting www.deforcemovie.com. To find out about ticket availability, prices and other films showing at the festival visit www.njfilmfest.com.

About the Director
Born in Detroit and raised in Oakland County's working class, Daniel Falconer studied at NYU's Tisch School of Arts. Started in 2008, Falconer co-wrote, directed and produced DEFORCE- his first feature-film. He will be in attendance at Sunday's showing to take questions.