Tarah and Coralie make up Tarah Who?, a duo based in Los Angeles.  Tarah Carpenter is the lead singer and guitarist, Coralie Herve? plays drums.   They play 90s rock, grunge, punk. A description they have heard a lot from fans was "if Motorhead was fronted by Alanis Morissette". Tarah says that sums their sound up perfectly. The Penguin Rocks presents this interview with Tarah Who?

We reached out to them to learn more about their band.

Tarah: The short story behind the band name is that we needed to come up with something really quickly because we started getting booked before getting the name! I thought I would change it but we just kept playing! I started this project in 2006 when I moved to Los Angeles from Paris, France. Coralie has joined the band in 2017 I believe?

Coralie: I joined Tarah Who? four years ago already, crazy !!!

Tell me about your latest record. What songs are you most proud of?

Coralie: We just released a new album called “Supposedly, A Man” last September and the songs are more “simple and direct” than the previous albums. I don’t really have a favorite song actually, they are all fun to play !!

Tarah: I wrote this latest album during the pandemic and it was really strange because I usually see Coralie every other day and we practice for hours. During the lockdown, we could not rehearse and I introduced her to the new songs via zoom. When we recorded the album, it was our first time playing the songs together. We recorded with our producer Jason Orme. All of the songs are too close to me to have a favorite. I did really like how each one of them came along in the end. I am overall very proud of the whole album, considering how it was written.

Tarah: We have 3 albums and 3 Eps and we are working on a new Ep for 2022. The band has changed from a singer-songwriter project to a full band and now a duo. It has evolved and matured over time. :)

Tarah: I think the time that I booked us at a strip club without knowing was pretty memorable. When we arrived all that we could see were those nude neon signs and I thought..."naah.. that's not it" but when we pulled in, they were definitely expecting us and super excited too! It turned out to be one of the most memorable shows and we made the most money on that tour thanks to that gig! 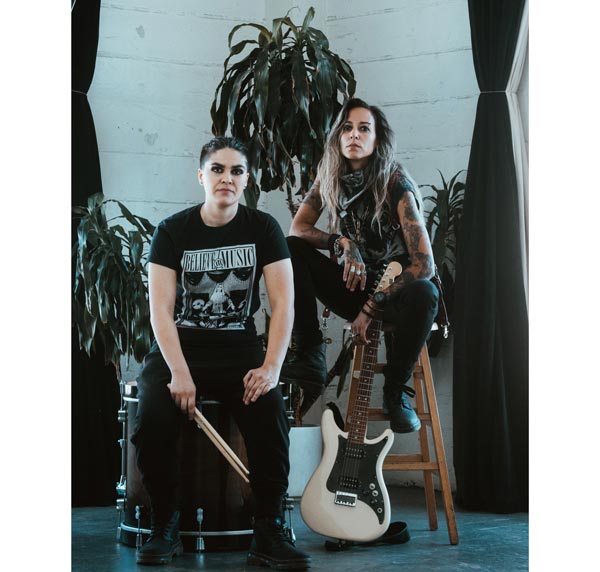 Coralie: We try to play everywhere haha!! It has been hard due to COVID but we did a gig in London last summer which was awesome! I would like to go play in Australia, it would be amazing!

Tarah: We play where the opportunity takes us. I personally would love to play more festivals, but dive bars can be as memorable as big stages. It really depends on the crowd, more than the walls or fame of the venue. As Coralie said, I would love to check out the Aussie music scene as well. :)

Is there one or two songs that you’d say best represents your band?
Tarah: our latest song, "Supposedly a Man" and "Ache" - my favorite song to play live.

Coralie: I want to say “Pantomath” for our punk/rock side and “Manners” for the riffs and groove of Tarah Who?

Tarah: I would love to do a Rock festival hopping tour.

Coralie: Being able to go on a World Tour would be a dream come true !!