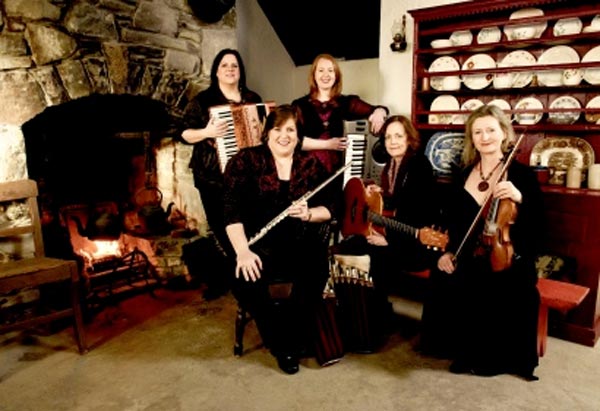 (WAYNE, NJ) -- Cherish the Ladies will perform as part of William Paterson University’s WP Presents series on Saturday, December 4 at 8:00pm in the Shea Center for Performing Arts on the campus in Wayne. Cherish the Ladies is a Grammy-nominated, Irish-American super group that formed in New York City in 1985 to celebrate the rise of women in what had been a male-dominated Irish music scene and has since toured the world, played the White House and the Olympics, recorded 17 outstanding albums including a live recording, “An Irish Homecoming,” which was simultaneously videotaped for a Public Television Special that aired across America and won an Emmy.

In their Celtic Christmas program, the Ladies put their signature mark on classic carols such as “O Come All Ye Faithful” and “Silent Night,” in arrangements that highlight the group’s unique Celtic instrumentation, beautiful harmonies, and spectacular step dancing. Cherish the Ladies have released three critically acclaimed holiday albums: “On Christmas Night,” “A Star in the East,” and “Christmas In Ireland.

Under the leadership of National Heritage Award winner and All-Ireland flute and whistle champion Joanie Madden, named by The Irish Voice Newspaper as one of the Top 25 most influential Irish Americans of the past quarter century, their continued success as one of the top Celtic groups in the world is due to the ensembles ability to take the best of Irish traditional music and dance and put it forth in an immensely entertaining show.

They’ve won recognition as the BBC’s Best Musical Group of the Year and were named Top North American Celtic Group at the Irish Music Awards and not to mention having a street named after them in the Bronx! They’ve collaborated with such musicians as The Boston Pops, The Clancy Brothers, the Chieftains, Vince Gill, Nanci Griffith, Pete Seeger, Don Henley, Arlo Guthrie and Maura O’Connell as well as being the featured soloist with over 300 nights of symphony orchestras.

Tickets are $40 for the front orchestra, $35 for rear orchestra and front loge, and $30 for rear loge.  For tickets, visit wppresents.org, or contact the box office at 973.720.2371 or boxoffice@wpunj.edu. Shea Center for Performing Arts is located at 300 Pompton Road in Wayne, New Jersey.

WP Presents at William Paterson University has been made possible, in part, by funds from the New Jersey State Council on the Arts, a partner agency of the National Endowment for the Arts.