(WEEHAWKEN, NJ) -- Woodstock Theatre Group and Hudson Theatre Works present a World Premiere Musical Holiday Event, Elliot & Me, from December 2-12 with performances Thursday through Sunday. Elliot & Me is a musical comedy based on the lives of songwriter Elliot Willensky and his younger brother Steven. The brothers have written a 2 man show they are preparing to pitch to legendary Broadway producer Max Stone.

It’s a heartfelt story of brotherly love based on a powerful bond that has grown through the years. Elliot is a charming, free-spirited ladies' man overflowing with talent and joie de vivre... with a knack to drive Steven crazy. Elliot and Steven both reflect on the volatile ups and downs of their shared experiences: from their raucous "wonder years" growing up in Bayonne, NJ; to the painful conflict when Elliot defies the expectations of his traditional middle-class Jewish family and drops out of medical school to write pop songs; to Elliot's rise to stardom writing hits for Michael Jackson and Whitney Houston and Steven’s starry-eyed admiration for his Hollywood lifestyle; and eventually to their role reversals when Elliot’s career hits a few bumps in the road and he needs to rely on Steven for help.

Elliot and Me is filled with humor, colorful personalities, unexpected situations, and uplifting musical moments with Music by Elliot Willensky; Book by Steven Willensky & Scott Coulter; and Arrangements by Michael Holland. Elliot and Me features Eric Briarley as Elliott and Drew Seigla as Steven. 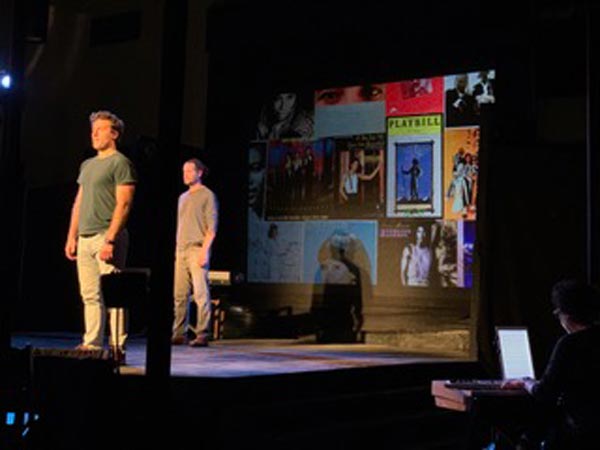 Performances are Thursdays - Saturdays at 8:00pm and Sunday at 3:00pm. Tickets are $25.00 and $15.00 for Seniors/Students. Tickets are available for purchase online. Hudson Theatre Works is located at 80 Hauxhurst Avenue in Weehawken, New Jersey.

Drew Seigla* plays Steven.  Drew is a standout among theatre and opera audiences, recognized for his “stunning tenor voice” by BroadwayWorld.com. He made his Off-Broadway debut as Matt; The Mute in The Fantasticks where he continued for a solid two-year stint. He gained his second NYC credit after joining the cast of Sweeney Todd as their Standby Anthony/Tobias/Beadle at Barrow St. Theatre. Regional Theatre highlights include Kiss me Kate at Flat Rock Playhouse & Jack in Into the Woods at Barksdale Theatre. Before returning to NYC in 2014 he made his opera debut with Lyric Opera Virginia, where he sang Gastone & covered Alfredo in La Traviata. Seigla was last seen as Pertshik in Fiddler on the Roof in Yiddish at Stage 42, directed by theatre legend, Joel Grey. Drew holds a B.M. from The Juilliard School, and studied Music Theatre at Elon University.

Hudson Theatre Works is committed to ensemble collaboration as well as artistic risk through its work with its permanent company, guest artists, partner institutions and the surrounding community.  It is dedicated to a rugged aesthetic which seeks to tell stories, both new and old, classic and contemporary, that reflect our lives, relationships and the world today.  Hudson Theatre Works' primary focus is on bringing a living theatre community to Hudson County, and the wider metropolitan area through performance, affordable pricing, outreach and theatre arts instruction.  Hudson Theatre works is a professional Equity company and a proud member of the New Jersey Theatre Alliance.