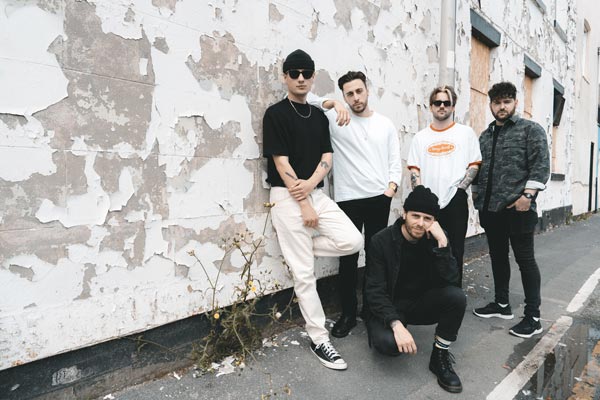 Desperate Times Desperate Pleasures, which features recently released singles ”Desperate Pleasures", ”Algorithm" and “Carbon Mono”, marks a concerted step into the future for Boston Manor. It’s the coining of a bold, bright new sound, building upon the bruising pop-punk of their earlier work, the big moves of last album GLUE, to compose music that’s both heavier and more unabashedly accessible than that which preceded it. Hook-laden, coherent, blackly witty and with a molten emotional core, it’s the opening of a new chapter, hinting at even greater brilliance to follow.

That said, this EP did not come easily, at first. “We made this record just coming out of lockdown,” vocalist Henry Cox says. “We’d tried to write throughout 2020 but nothing was coming out; everyone’s mental health was suffering - it was just a really frustrating time. And then, as soon as January this year hit, just like that all these songs started flooding out of us. It was such an enjoyable time; we hadn’t seen each other for 18 months & we’re used to spending nearly every day together. We really just fell back in love with being in a band.”

The doubt, the sense that they might not reach that next album, seems absent now, and as Cox and guitarist Mike Cunniff look back over the years their band have been together, the toil and the triumph, they know they’ve built something strong enough to withstand the challenges to come. There’s a trust, a bond between them, a chemistry that can no longer be questioned. “I don’t think we could ever really abandon this, that we could ever be the sort of band that comes and goes with different members,” shares Cunniff. “We’re the sum of our parts, really.”

On Desperate Times Call For Desperate Pleasures, that sum adds up to something remarkable, a bold blast of future rock studded with hooks and honed to an emotional majesty. The start of something big, the start of the next chapter, and five of the most essential, unforgettable tunes you’ll hear all year. Their lowest ebb didn’t kill Boston Manor – listen to their new music. It’s only made them stronger.

Desperate Times Desperate Pleasures is available to stream and purchase today at https://shrptn.co/dtdp.

Boston Manor will cap off 2021 on tour in North America as main support to Neck Deep along with Zero 9:36, Heart Attack Man and Oxymorrons before kicking off the new year headlining the UK with support from Movements and Jools in February 2022.