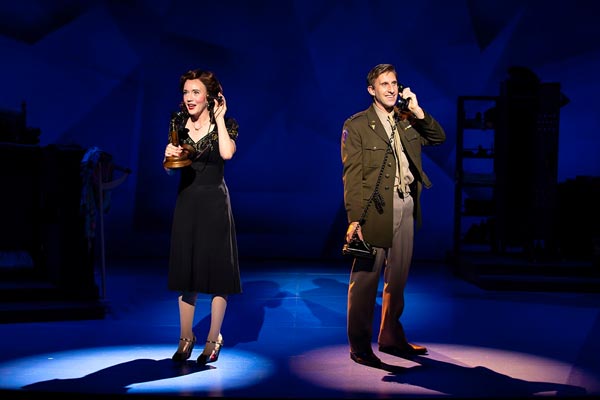 You can see Ken Ludwig’s play “Dear Jack, Dear Louise” at the George Street Playhouse, laugh and cry and marvel at two tour-de-force performances, or you can wait till spring and pay gas, tolls, parking and New York ticket prices to see the same play on Broadway.

It’s up to you, but you’ve got only until Nov. 21 to decide; that’s when this romantic comedy wraps up its run at the New Brunswick theater.

“Dear Jack, Dear Louise” is the first live performance at the George Street Playhouse after the hiatus imposed by the COVID pandemic. The play, based on the experience of Ludwig’s parents, is the tale of a doctor drafted into Army service during World War II and an aspiring actress gunning for her first Broadway role, even if it’s in the chorus line.

At the instigation of their fathers, Jack Ludwig—who is stationed in Oregon—and Louise Rabiner—who is living at the Curtain Call Boarding House in Manhattan—begin a correspondence in the way that people corresponded in 1941, by writing letters.

In fact, all of the dialogue in the play, excepting one phone call and the last few words spoken before lights out, consists of Jack and Louise verbalizing their written exchanges.

Far from being static, this back-and-forth is loaded with laughs and tears as the shy soldier from Coatesville, Pennsylvania, and the exuberant actress from Brooklyn get to know each other and share the frustration and fear that the war insinuated into the lives of tens of millions of people.

Jack is repeatedly disappointed in his efforts to get a leave in order to meet Louise in person, and he and Louise are always conscious of the possibility that Jack will be deployed to a war zone which, they know, could mean the end of their dreams.

Bill Army as Jack and Amelia Pedlow as Louise give moving performances that evoke joy, hope, jealousy, doubt, and fury in the unusual circumstance of looking into the audience instead of at each other.

There are hilarious exchanges about Bill’s family in Coatesville (his mom has 11 sisters), and there are frightening scenes, with projections designed by James Youmans, that evoke the overwhelming chaos and violence of combat.

Amelia Pedlow exhibits remarkable comic artistry—playing distinct characters in two conversations—as she mimics exchanges she has had with Bill’s sister and as she writes out for Bill, but performs for the audience, an audition scene from “Arsenic and Old Lace.”

The actors work on a set which Youmans has provided with two mobile islands—Jack’s a stark cubicle with books, microscope, duffle bag, and trunk, and Louise’s a gay retreat with dresses, coats, shoes cosmetics, and movie posters. Hovering overhead are dozens of sheets of papers representing the flurry of letters these two have exchanged. 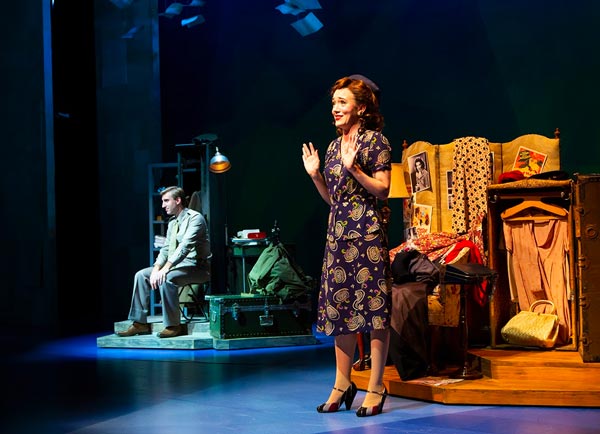 The opening night performance of this show was interrupted mid-scene when violent wind gusts shut down most of the power in the high-rise that houses the New Brunswick Performing Arts Center, turning the house lights on and the stage lights off and plunging into darkness the apartments on the floors above the theaters.

When the show resumed, the house lights remained up for a while, but none of this visibly flustered the actors, who took it in stride, nor the audience, who bore it patiently and likely had forgotten about it when they stood to give the production a standing O at the end.

In fact, thanks to the wind, the audience got more than it had bargained for. During the short pause in the action, artistic director David Saint, who directed this production, took to the stage with an impromptu but informative and moving discussion of World War II, including details about letter writing during the war and about his father, a highly decorated Army captain who participated in the invasion of Normandy and the Battle of the Bulge. 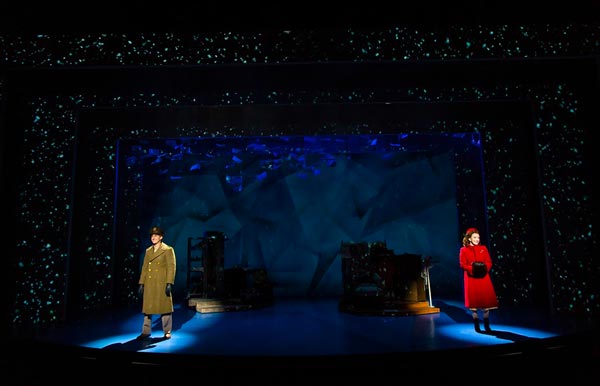