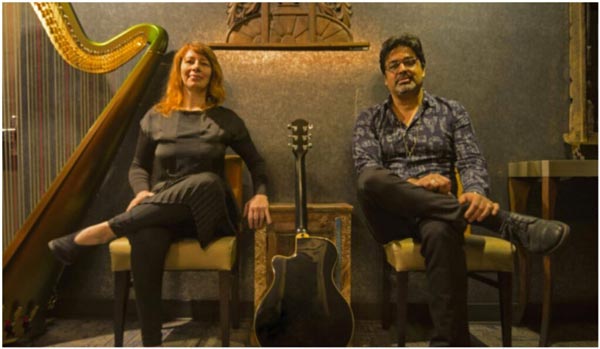 “OASIS marks the beginning of the Global Music Series for Jersey City Theater Center at White Eagle Hall. It is an honor to welcome Rez Abbasi, renowned composer and guitarist from Pakistan, and Isabelle Olivier, co-creator of OASIS, to Jersey City. Our mission with the series is to highlight the diverse voices from around the globe through a distinctive offering of high-caliber music,” says Olga Levina, JCTC’s executive producer.

“OASIS was released just before the pandemic, so we didn’t fully get the chance to present the music to fans. It’ll be exciting to revisit and relive this music because it’s a highly unique project,” adds Abbasi.

Abbasi and Olivier’s White Eagle Hall performance is part of a three-stop East Coast tour beginning at the Maison Francaise, Embassy of France in Washington, D.C. on Wednesday, November 3, and concluding with an intimate performance of reduced capacity at jazz club Firehouse 12 in New Haven, CT, on Friday, November 5.

Tickets are $20 and available for purchase online. White Eagle Hall is located at 337 Newark Avenue in Jersey City, New Jersey.

Rez Abbasi - Born in Karachi, Pakistan, schooled at the University of Southern California and the Manhattan School of Music in jazz and classical music, along with a pilgrimage in India under master percussionist Ustad Alla Rakha’s guidance Rez Abbasi is a vivid synthesis of all the above-stated influences and genres. The top-ten guitarist in DownBeat’s Critics Poll has made New York home for the past 25 years and is considered by many to be one of the foremost modern jazz guitar players the world over.

Isabelle Olivier is a jazzwoman and harpist with a strong musical personality. She brings a wave of freshness and novelty to the international artistic world with her surprising and unique instrument. She won the Prix de la Villa Le Nôtre of Versailles in 2015 and was the first composer to benefit from a residency at the Potager du Roi. She is currently the worldwide ambassador of the new electro-acoustic harp Salvi’ Rainbow.’ Isabelle Olivier wants to promote music as means of passing things on by putting forward different ethnic groups.

Founded in 2006, Jersey City Theater Center, located at 335-337 Newark Avenue in Jersey City, is a nonprofit 501c3 arts organization committed to inspiring conversations about important issues of our times through the arts.