Over 600 days have passed since Paper Mill Playhouse’s last opening night.  Ironically, that opening was for a musical revue called “Unmasked.”  Thrillingly, Paper Mill returns with a rousing new production of Jason Robert Brown’s “Songs for a New World.”

Confident or vulnerable, defiant or anxious, the four performers  -- Roman Banks (Dear Evan Hansen), Carolee Carmello (Parade), Andrew Kober (Cinderella), and Mia Pinero (West Side Story) -- explore common emotions and themes in each of the songs. Brown’s overarching themes of confronting new paradigms make for the ideal return for audiences and the cast.

Brown’s poignant lyrics and pungent music stir a robust evening.  From the start themes are proclaimed and reaffirmed:  “It’s about one moment … when you’re on the verge of success, the sky starts to change, and the wind starts to blow.” The signature song, “The New World,” lies warmly and invitingly on the ear. The song is used in segues, bringing another character to a moment of truth – or hoped-for truth. 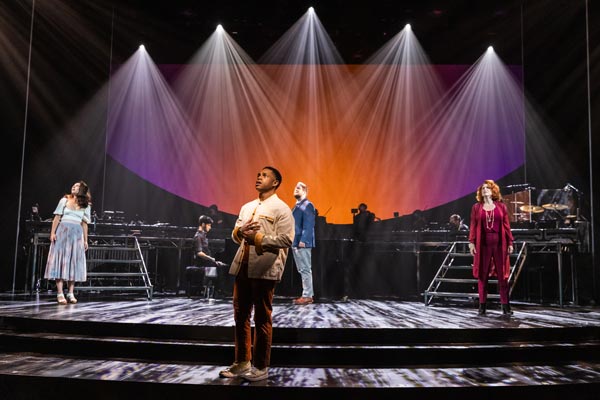 Brown wryly notes some people survive the life-changing jolt. Others succumb; nonetheless, faith, hope, and a belief in self, wisdom, mercy, and goodness give many of these characters strength.  Wit and wise performances are wielded with panache from the four talented performers.  Together their crystalline tones embrace and engage the audience.

Mark S. Hoebee’s direction avoids playing an overarching narrative to the story songs – preferring to let the cast’s acting and singing place the scene and power through compelling vocalizations.  This wisely frees the performers to do what they do best – perform.  As such, each singer has a distinct presence and vocal maturity that commands each song, full of warmth and experience that helps you hear Brown’s songs in a refreshing, exciting way.  The audience warmly and gratefully appreciates each song for the crafty performances, rich characterizations and the story they tell.

Carmello, firmly in control and connected to the material with pathos and comedic highlights as she attempts to capture her neglectful spouse’s attention in “Just One Step” vocalizing the eventual hollowness of champagne dreams in “Stars and the Moon,” or embodying an abandoned Mrs. Claus in “Surabaya-Santa.”  She renders these characters’ interlocked relationship troubles with sharp vocals and wry characterizations. 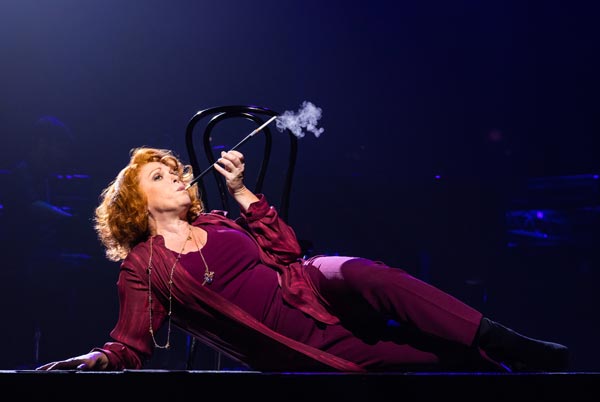 Banks has some poignant moments especially in “The Steam Train” portraying an aspiring basketball player with hopes his court skills lead to fame and fortune.  He’s got a rock solid confidence and presence used to great affect in “King of the World.”

Pinero shines consistently exuding warmth and love even when singing about heartbreak with her soprano hitting the rafters.

“Songs for a New World” is filled with the lush harmonies, crafty lyrics and potent emotional power of music.  The memorable melodies and feisty harmonies and moments stay with you after the show.   This production is a warm welcome back to the theater for the lucky patrons of the Paper Mill. 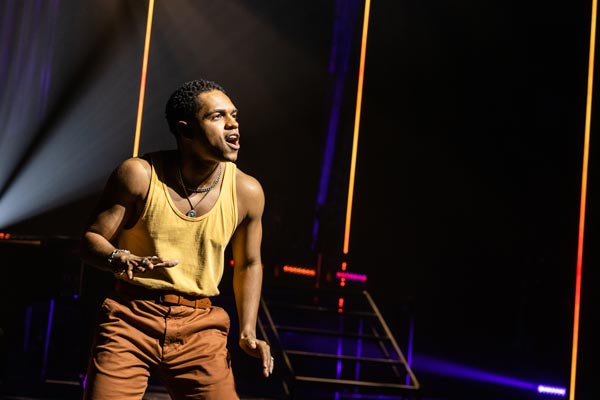 PHOTOS BY EVAN ZIMMERMAN FOR MURPHYMADE