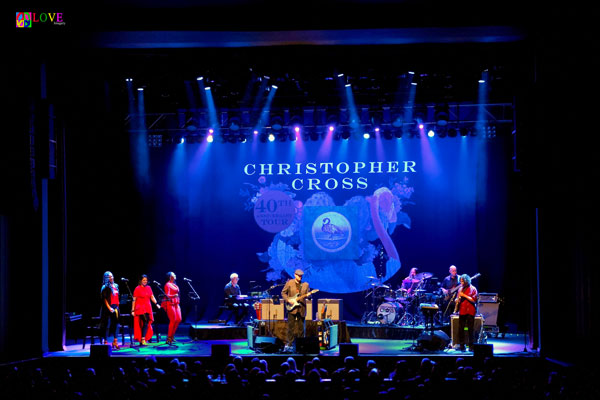 Light jazz plays inside the beautiful Mayo Performing Arts Center auditorium in Morristown, NJ on this Tuesday, October 5, 2021 evening as music lovers ready themselves for a concert by singer/songwriter/guitarist Christopher Cross. Cross was the first artist in history to win all four major awards in a single Grammy ceremony when, in 1981, he brought home honors for Best New Artist, Record of the Year, Song of the Year, and Album of the Year for his debut recording, the multi-platinum-selling disc Christopher Cross.

Behind the stage, a backdrop banner proclaims “Christopher Cross 40th Anniversary Tour” and is graced with the cover photo of his eponymous first album, along with Cross’ signature pink flamingo.

The lights dim and a group of musicians including Curtis Brengle on keyboards, David Hughes on bass, Wes Little on drums, and Andy Suzuki on saxophone/keyboards — along with background vocalists Jewelee Peters, Marcia Ramirez, and Stephcynie — take their places on stage.

The ethereal sound of a keyboard is joined by the other instruments as Cross takes the stage and opens tonight’s show with “Minstrel Gigolo.” 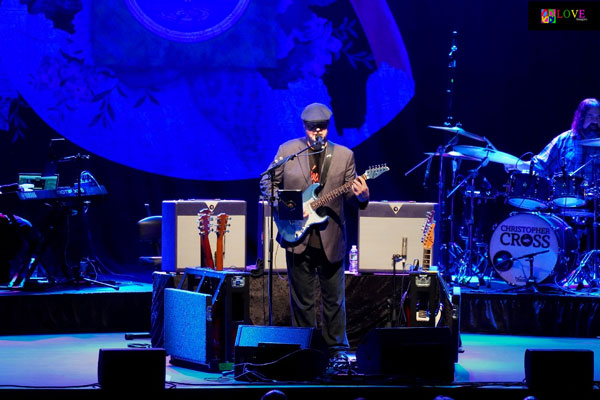 Cross’ warm tenor hugs the audience as he sings, “You’re the minstrel gigolo/Don’t you know/You sing your songs of love so soft and low” before Andy Suzuki’s soprano sax joins in and the three sultry backup vocalists sing while slowly swaying from side to side under beams of colored light.

The crowd cheers and Cross launches into “All Right.” His trademark falsetto sounding just like it did on the original recording, Cross sings, “It’s all right, I think we’re gonna make it/I think it might just work out this time.” Curtis Brengle plays an introspective piano interlude and Wes Little’s drum solo is choreographed with the backup singers pointing and clapping to accentuate his percussion. Andy Suzuki is featured on a soprano sax solo before Cross solos on guitar, fast-picking along to David Hughes’ rumbling bass.

Cross and the band immediately segue into “Never Be the Same” with an arrangement that features an Andy Suzuki alto sax solo, breezy background vocals, and Cross’ lead vocal which has audience members humming along on the “And I’ll never be the same without you here/Live alone, hide myself behind my tears” chorus.

Following hearty applause, Cross greets the crowd, announcing, “Thanks so much. Welcome! It’s been a rough 18 months.” Going on to explain how he became infected with COVID-19 in March, 2020 and ultimately developed Guillaine-Barre Syndrome which caused him to become paralyzed, Cross dedicates his performance tonight to all of the healthcare workers who have helped him and so many others during the past year and a half.

Explaining, “This is a celebration of my entire career,” Cross announces that tonight he will be playing all of the songs from his first album. Continuing with one tune which Cross calls, “the first song Michael McDonald sang on,” Cross and Co. perform “I Really Don’t Know.” Jewelee Peters, Marcia Ramirez, and Stephcynie take turns singing lead on this song with its well-known “I really don’t know anymore/I really can’t say” chorus. 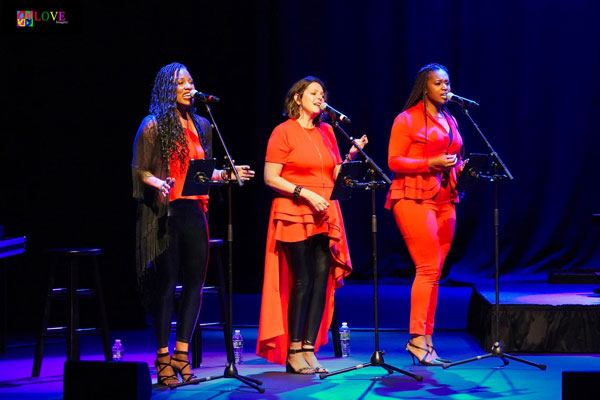 Brengle’s jazzy piano solo cascades as the arrangement builds and Suzuki joins in on alto before vocal harmonies swell and Cross and the vocal trio bring the number to a satisfying conclusion.

Cross takes a moment to thank the various members of his crew and follows up by announcing the birthday of saxophonist/keyboardist, Andy Suzuki. The audience joins Cross and Co. on a rendition of “Happy Birthday” before Cross introduces the members of his band and Curtis Brengle plays a warm and sweeping keyboard solo which serves as a prelude to Cross’ #1 hit from 1980. Cross’ signature ostinato guitar accompaniment brings applause from the crowd as audience members immediately recognize the introduction to “Sailing.” As Cross sings, “Sailing takes me away to where I’ve always heard it could be,” music lovers in the house are immediately transported to another place and time. As the arrangement cruises along, Brengle follows up with a lyrical piano solo, and many in the crowd leap to their feet at the conclusion of this classic number.

Cross announces, “This one is from the newest album. The ladies will be singing in French for you,” as Hughes’ funky bass playing opens “Baby It’s All You.” Cross plays a distorted guitar solo and Brengle delivers a funky Fender Rhodes solo on this driving tune that has the backup singers dancing and clapping. Following a wailing Suzuki sax solo and a precision Wes Little drum break, Cross plays a second distorted guitar solo on this upbeat and driving toe-tapper. 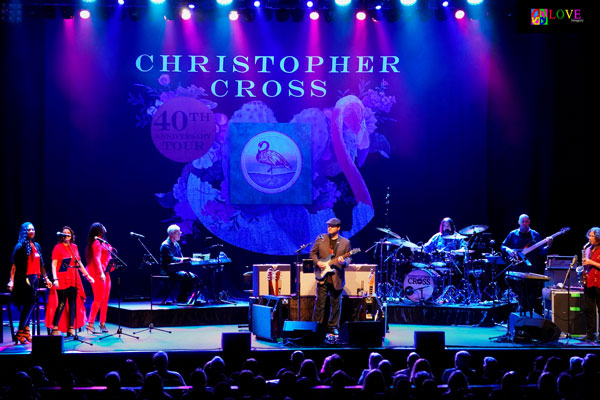 Cross tells the audience how much he admired actor Dudley Moore before performing his musical contribution to Moore’s film, Arthur — “Arthur’s Theme (Best That You Can Do).” Audience members happily sing along on the song’s well-known “When you get caught between the moon and New York City” chorus.

After revealing that “The band that played on ‘Arthur’s Theme’ was Toto,” Cross takes a seat on a stool center stage with an acoustic guitar. Acknowledging, “I just recently turned 70,” audience members clap, and Cross jokes, “Thank you, it’s nice to get applause for being old!” He dedicates his next song, “Swept Away,” stating, “I’m sending it out for all you hopeless romantics.” Keeping time with his left foot as he fingerpicks, Cross’ resonant tenor and falsetto are featured on this easy-listening number with a beautiful melody before Suzuki’s soprano sax joins in and adds a solo to Cross’ strumming guitar.

Cross announces that his next song, “Dreamers,” is “about people with wonderful imaginations,” before dedicating it to civil rights leader John Lewis. On this mellow jazz waltz, Cross’ acoustic guitar keeps the rhythm moving along before the band joins in — the background singers performing lush three-part vocal harmonies, and Suzuki playing soprano sax on the tune’s dreamy melody.

The back-up vocalists are featured on another tune from Cross’ first album — one that he originally recorded with singer Valerie Carter. Audience members bop their heads to the ostinato bass and piano of “Spinning” and its melodic “It may take me a long long time/But I’m gonna find you out” chorus. Suzuki plays a solo on the EWI, or electronic wind instrument, and Cross impresses with a tasty electric guitar solo. 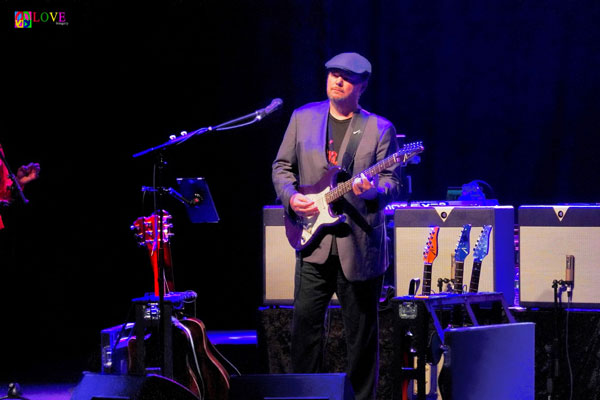 On a song which was originally recorded as a duet with Nicolette Larson, Cross presents “Say You’ll Be Mine,” another number from his debut album. His voice sounding sweet and easy as he croons, “Say you’ll be mine/Say you’ll be mine until the sun shines,” the three backup singers harmonize beautifully on this lush and lovely arrangment which features an Andy Suzuki organ solo.

Cross launches into another cut from his debut album entitled “The Light is On.” Opening with vocals provided by Peters, Ramirez, and Stephcynie, Cross joins in on lead before the “It’s alright/The light is on/The darkness has run to hide” chorus, and then solos on guitar. David Hughes impresses with a lively bass solo and Suzuki’s mystical-sounding EWI handily carries all the synthesizer parts.

Performing a number from his latest recording, Take Me As I Am, Cross presents a tribute to his musical mentor, Joni Mitchell. Explaining that “her birth name is Roberta,” Cross performs the piece — a jazz fusion composition entitled “Roberta.” As the background singers croon, “She is the sun/She is the seed and water/She’s the shaman/Don Juan’s reckless daughter,” Hughes pays tribute to Jaco Pastorius on the bass, Suzuki plays a Wayne Shorter-like soprano sax solo, and Cross wails on electric guitar.

Cross and Co. channel Toto with their next number, “No Time for Talk,” a tune with a progressive Latin feel which features virtuosic musicianship from drummer Wes Little, a space-age sounding harmony EWI solo from Andy Suzuki, and a percussive and rhythmic Curtis Brengle piano solo.

The audience reacts with avid hurrahs and Cross responds with a dynamic version of his 1980 hit, “Ride Like the Wind.” After inviting the crowd to sing along saying, “Michael McDonald gave this one its signature sound, if you know it and want to give it a shot,” heads bop in the audience as music lovers join in singing following the tune’s infectious “Da da-da da, da da da da” interlude and Cross plays a power-driven electric guitar solo. 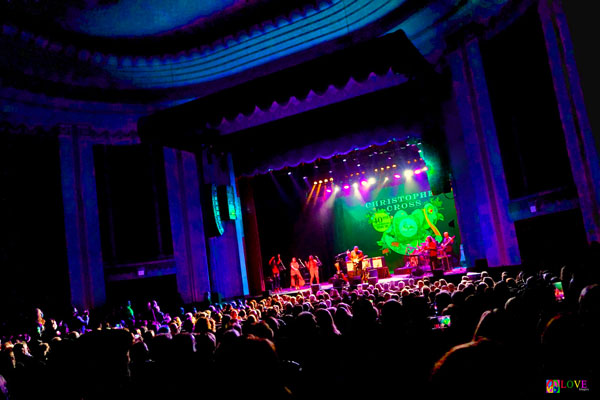 During the number, a large happy-face balloon is bounced among the front rows of the auditorium before audience members stand, cheer, and applaud with whistles, hoots, and hollers.

The musicians take leave of the stage but Cross returns to stand alone in the spotlight and sing an encore of “Think of Laura.” Accompanied by Curtis Brengle on piano, Cross’ beautiful warm tenor caresses the audience as he sings, “Think of Laura but laugh don’t cry/I know she’d want it that way” on this poignant musical elegy. The crowd cheers and Cross closes by saying, “Be safe. Be good to each other. I love you.”

As we make our way out of the MPAC auditorium, we chat with several audience members who share their thoughts regarding tonight’s concert. Remarks Joanne from Randolph, “It was excellent!” Acknowledging, “I love Christopher Cross, and I started crying when he talked about his illness,” Joanne reveals, “I’m a nurse, and I give MPAC five thumbs up for their COVID protocols. The process was easy and safe, and wearing a mask is so important.”

Deana from Sparta calls tonight’s program, “Great!” Recalling, “I’ve been listening to Christopher Cross’ albums since I was little,” Deana adds, “I haven’t been to a concert since COVID, but I was very comfortable with all of the COVID protocols here at MPAC.” Scott from Sparta agrees, adding tonight’s concert was “awesome” and “a lot of fun,” exclaiming, “Christoper Cross has still got it!” 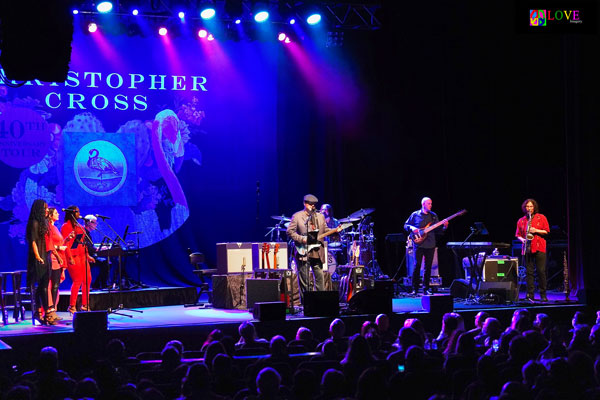 Whereas Michael from NYC contends, “Cross’ encore, where he sang ‘Think of Laura’ with just piano, was so well done,” Dan from Voorhees calls the entire show, “Fantastic,” explaining, “It was cool that he did all nine songs from his debut album, and it was nice to hear his newer songs, too — they were great, as well,” before noting, “His songs are soft rock, but the band adds a layer of texture making them more vibrant and giving the music a different perspective.”

Lastly, we chat with Sandra from NYC who comments, “I’m a groupie! I’ve been following Christopher Cross forever — for 40 years — and, even with COVID, I’ve seen five shows in the past few years.” Calling tonight’s effort by “the band, the girls, and Cross’ voice — wonderful,” Sandra concludes by exclaiming, “For him to be sick like that for five months and to still be able to perform like this is truly amazing!” 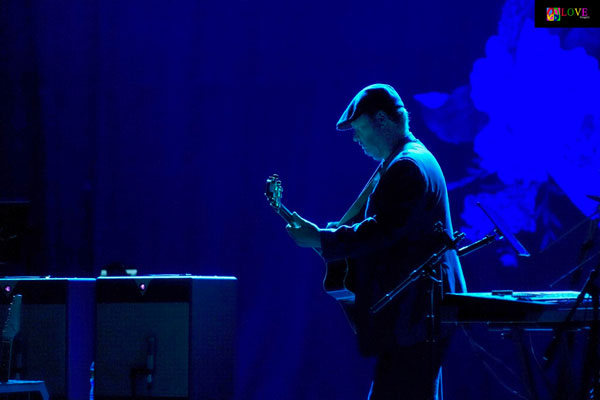 To learn more about Christopher Cross, please go to christophercross.com. For information on upcoming concerts at MPAC — including Judy Collins on Oct. 24, Paul Anka on Oct. 26, Rosanne Cash on Nov. 10, Michael Bolton on Dec. 3, and Dennis DeYoung: The Grand Illusion 40th Anniversary Tour on Dec. 11 — please click on mayoarts.org. 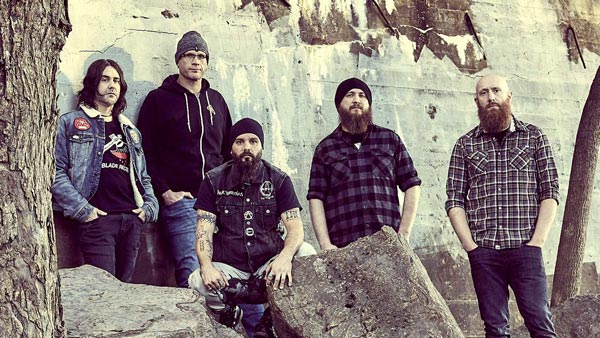 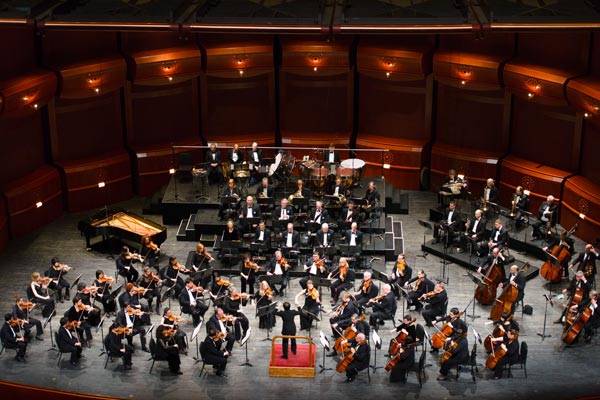