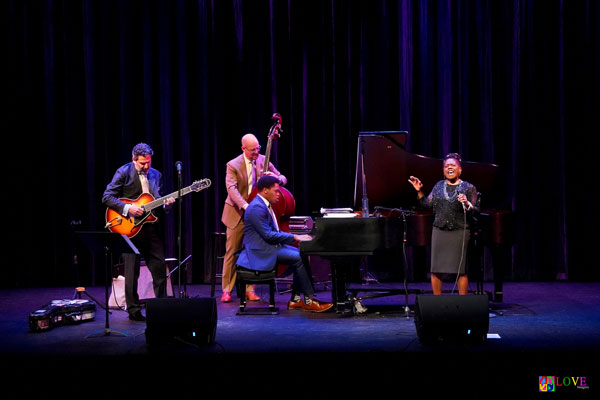 Music lovers are filtering in to Toms River, NJ’s Grunin Center for the Arts on this Sunday, September 26, 2021 evening to experience Billie & Blue Eyes, a musical tribute to Billie Holiday and Frank Sinatra presented by singer/guitarist John Pizzarelli and jazz vocalist Catherine Russell.

John Pizzarelli was born in Paterson, NJ. As a youngster, he took lessons on banjo but soon switched over to guitar. He also played trumpet in college. As the son of jazz guitar great, Bucky Pizzarelli, while still a teenager, John had the experience of performing with the likes of Benny Goodman, Clark Terry, and Les Paul. With a trio he founded with his brother, Martin, Pizzarelli spent time in the 1990s as the opening act for Frank Sinatra, whom he’s honored with recordings including 2006’s Dear Mr. Sinatra and 2017’s Sinatra and Jobim at 50. 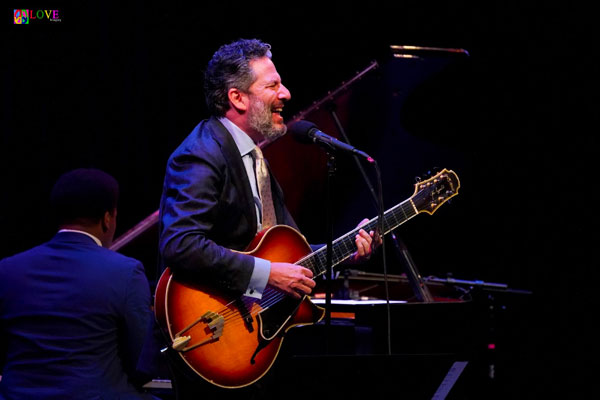 Appearing on over 50 albums by such celebrated artists as Paul McCartney, The Manhattan Transfer, and Rosemary Clooney, Pizzarelli recently won a Grammy for co-producing James Taylor’s most recent album, American Standard, and he’s also appeared on over two dozen solo recordings including his latest effort, Better Days Ahead: Solo Guitar Takes on Pat Metheny.

Vocalist Catherine Russell hails from New York. Her father, Luis Russell, was a legendary pianist/composer who worked with King Oliver and who also served as Louis Armstrong’s musical director. Her mother, Carline Ray, was a pioneering vocalist/guitarist/bassist who performed with Mary Lou Williams, Sy Oliver, and Wynton Marsalis. After graduating from the American Academy of Dramatic Arts, Catherine toured and recorded with artists including Cyndi Lauper, David Bowie, Paul Simon, Jackson Browne, Rosanne Cash, and Steely Dan, and has also appeared on over 200 albums. 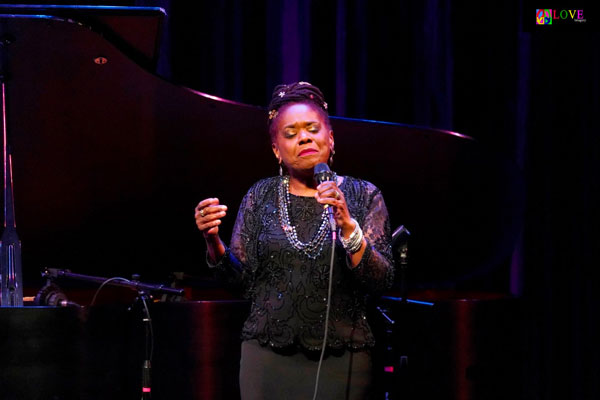 Russell’s seven solo albums have garnered rave reviews; her latest is her 2019 recording, Alone Together. She’s won a Grammy for her work on the soundtrack album to the HBO television series, Boardwalk Empire, and has also appeared on Late Night with Conan O’Brien, The Tavis Smiley Show, and on NPR’s Fresh Air, Piano Jazz, Mountain Stage, World Café, and Jazz Night in America.

We take our seats inside the modern and cozy Grunin Center auditorium to see a stage set with a grand piano, an acoustic bass, and several amplifiers and microphones.

Shannon Meyers, the Grunin Center’s artistic director, welcomes the crowd to tonight’s show, a sold-out event with 60% capacity pod seating, and the first since the onset of the COVID 19 pandemic. Announcing, “We are so glad to see you back!” Meyers introduces the members of The John Pizzarelli Trio — Pizzarelli on guitar, Isaiah J. Thompson on piano, and Michael Karn on bass — who take the stage looking dapper in suits and ties.

The soft strumming of Pizzarelli’s 7-string guitar is complimented by Karn’s walking bass and Thompson’s tinkling piano on the group’s opening number — Frank Sinatra’s “The Way You Look Tonight.” 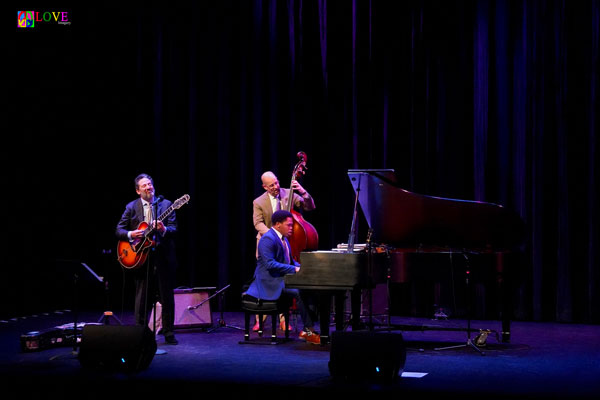 With his soft, smooth voice, Pizzarelli sings, “Some day, when I’m awfully low/When the world is cold/I will feel a glow just thinking of you/And the way you look tonight,” before embarking on scat singing guitar solo which elicits avid audience applause.

Announcing, “Sing along with me on this next song. I’ll point to you and you’ll know what to say,” Pizzarelli and Co. launch into “You Make Me Feel So Young.” After crooning, “You make me feel so young/You make me feel so Spring has sprung/And every time I see you grin/I’m such a happy…,” Pizzarelli points to the crowd and, as if on cue, they happily sing the word, “Individual,” to which Pizzarelli jokes, “That was it!” on this playful arrangement which includes a dynamic Isaiah J. Thompson piano solo. 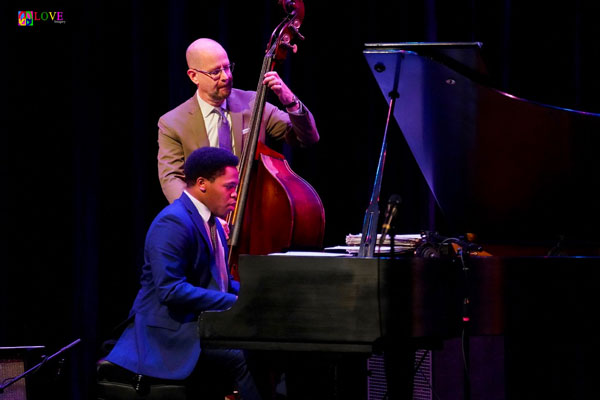 Quick strumming sets toes to tapping on Sinatra’s “How About You.” Pizzarelli scats while his fingers fly on an extended guitar solo which is followed by a nimble Thompson piano solo and a soft acoustic solo by Michael Karn where he makes his bass sing. Trading licks between guitar and piano elicits cheers and applause and the entire trio responds by taking a well-earned bow.

In between songs, Pizzerelli entertains the crowd with humorous stories — one about opening for Frank Sinatra in 1993 at the “Garden State Arts Center” — now the PNC Bank Arts Center — and another about opening for Sinatra in Germany. He also tells the audience a story about how Sinatra first encountered Cy Coleman’s song “Witchcraft” before the band performs the tune. On this jazzy toe-tapping arrangement, Thompson executes glissandos on the piano and Pizzarelli plays sliding chords and tremolo guitar before Thompson returns with a second chordal blues piano solo. 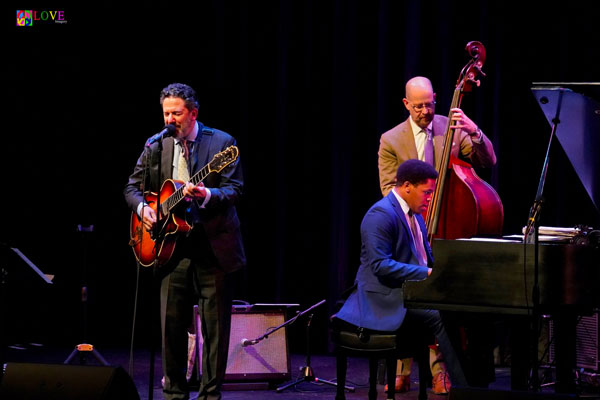 The crowd loves the trio’s beautiful and poignant arrangement of Sinatra’s “In the Wee Small Hours of the Morning” where Pizzarelli impresses by deftly using the pointer finger of his right hand on the strings of his guitar to produce harmonics on the song’s lovely melody. He follows up with an up-tempo jazzy rendition of “Ring-a-Ding-Ding” which has audience members gently bopping their heads to the lively rhythm.

Pizzarelli takes a moment to tell the crowd, “Thank you for coming out tonight and doing all the things you needed to do to be here,” before performing “the only song Sinatra ever recorded with just a guitar.” Karn and Thompson leave the stage as Pizzarelli does a lovely vocal rendition of “It’s Sunday” accompanied by chords and melody on his 7-string hollow body electric. 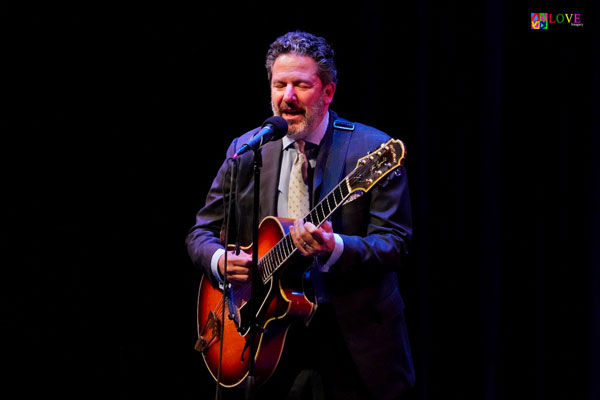 After relating stories about being on the road with his famous dad, Bucky, John performs his father’s arrangement of “This Nearly Was Mine.” Caressing his guitar, Pizzarelli coaxes out lonely round tones, bright ringing tones, and soft low tones on this lovely interpretation of his father’s work.

Pizzerelli introduces the audience to jazz vocalist Catherine Russell who joins him on stage for a duet version of “All of Me.” 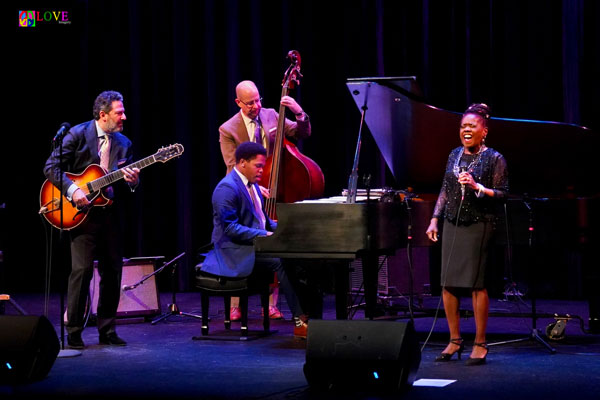 Looking stunning in a sparkling blouse and pencil skirt, her braided hair piled high on her head and bedazzled with jewels, Russell’s clear, sweet voice captivates the audience before each of the instruments is featured and Pizzarelli and Russell sing to one another, “All of me/Why not take all of me” to enthusiastic cheers and applause.

Russell’s pure sweet tone is spotlighted on “You Go to My Head,” expertly backed by Pizzarelli and his trio. 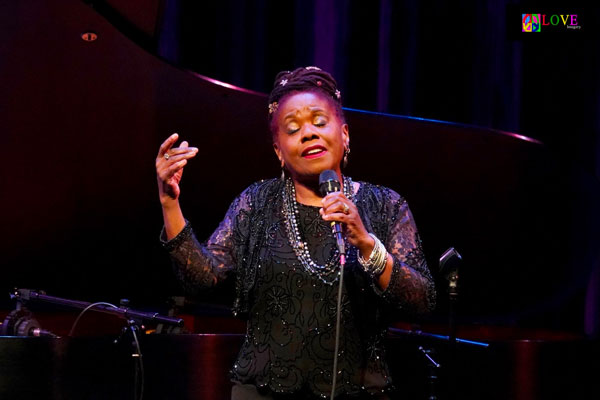 Swaying gently as she sings, her effortless vocal goes straight to the heart as she sings with style and Pizzarelli impresses with a superb guitar solo.

Following several tunes, including Russell’s beautiful haunting rendition of Billie Holiday’s “Ghost of Yesterday,” Pizzarelli says to Russell, “In this business of music, this medley I do with you is my favorite.” Here, the pair switches off vocals on a medley of tunes recorded by both Sinatra and Holiday including “If I Had You,” “Everything I Have is Yours,” “Polka Dots and Moonbeams,” “Darn That Dream,” and “Moonlight Becomes You.” They conclude with “What a Little Moonlight Can Do,” the entire the band having fun as the musicians play off one another to inspired cheers and applause. 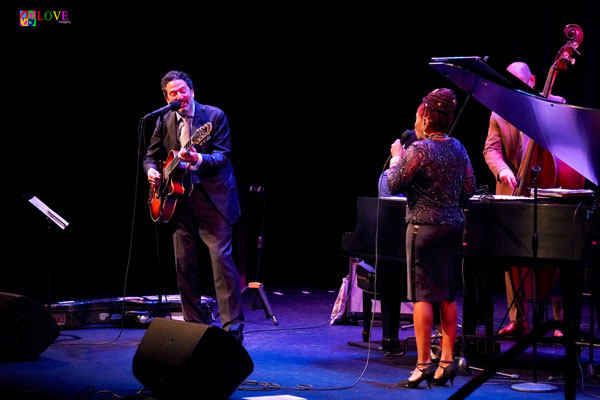 Russell gives a tour de force performance on Holiday’s “God Bless the Child.” Crooning, “Mama may have/Papa may have/But God bless the child that’s got his own,” Russell soulfully bends her notes while accompanied by Pizzarelli’s masterful guitar work. 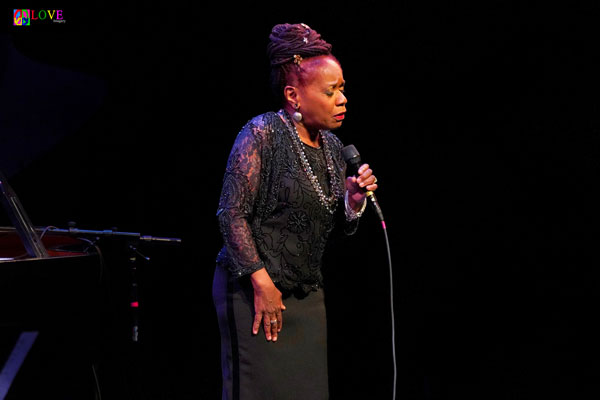 On this intimate performance, audience members can clearly make out the tapping of Pizzarelli’s foot as he plays before they respond with hoots, whistles, and cheers.

Ending with a swinging tune that gets everyone’s toes tapping, Pizzarelli, Russell, and Co. conclude by playing Holiday’s “With Thee I Swing,” a number which features Isaiah J. Thomson channeling the spirit of Thelonious Monk on a sparse piano solo, and the audience rewarding the entire group with a standing ovation.

For an encore, Russell and Pizzarelli sing to one another on a delightful rendition of “I Thought About You” which brings even more hoots and applause from the appreciative crowd. 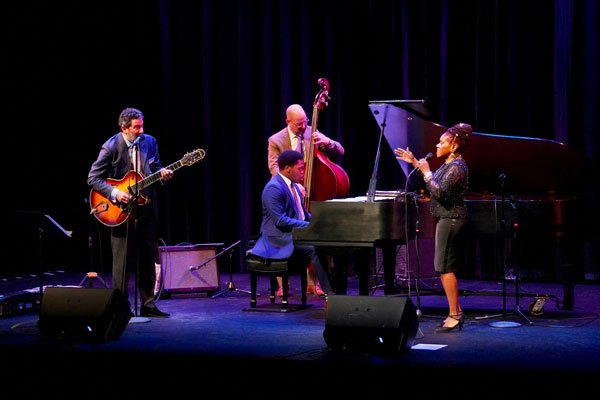 As we make our way out of the Grunin Center auditorium, we chat with several audience members who share their opinions of tonight’s program. Remarks Judy from Seaside Park, “I love John Pizzarelli, and Catherine Russell was fantastic, too! This was a great show — the entire thing was my favorite — plus, it’s so nice to be out and feel almost normal again.” Elaine from Seaside Park agrees, commenting, “It was so nice to be with people again,” before adding, “The performers looked like they were having fun and it was contagious!”

Richard from Manchester reveals, “I’ve seen Bucky and John Pizzarelli between 10 and 20 times,” adding, “I loved John’s stories about his dad, and I loved his chord interpretations” before noting, “On piano, Isaiah Thompson was beyond belief, and Catherine Russell was just great.” 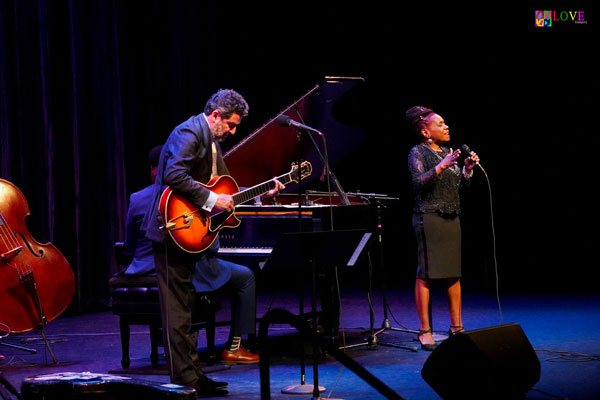 David, a teenager from Toms River tells us, “This is my first time seeing John Pizzarelli. I play the 12-string guitar, and I think it’s so interesting that he plays a 7-string. Now I want to get a 7-string and learn how to play it, and I also want to listen to more of John Pizzarelli’s music.”

Ricky from Toms River remarks, “I’ll bet a lot of folks came to hear Billie Holiday’s and Frank Sinatra’s music tonight, but actually ended up seeing two great original artists in John Pizzarelli and Catherine Russell, who are both just amazing!” Marilyn from Toms River concurs, calling this evening’s performance, “Fabulous!” and adding, “Their vocals were so smooth,” before Ella from Toms River sums up tonight’s Billie & Blue Eyes performance in a single word: “Extraordinary!” 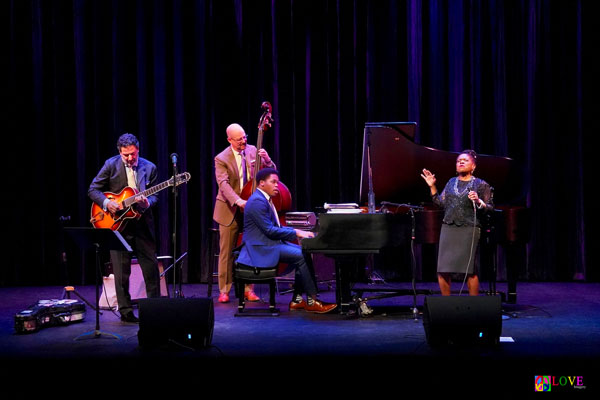 To learn more about John Pizzarelli, please go to johnpizzarelli.com. For further information about Catherine Russell, click on catherinerussell.net. For info about future programming at Toms River’s Grunin Center for the Arts — including Neil Berg’s 50 Years of Rock ’N Roll on Oct. 15, The Glenn Miller Orchestra on Oct. 25, and Splish Splash: The Music of Bobby Darin on Dec. 3 — please go to grunincenter.org.