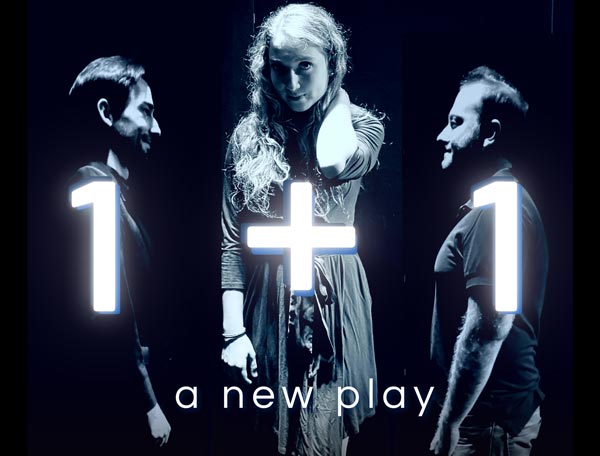 (ENGLEWOOD, NJ) -- Courtesy of acclaimed playwright Eric Bogosian, Black Box PAC is proud to produce a workshop production of the new play 1+1. This riveting new three-hander from the acclaimed playwright/actor Eric Bogosian (Sex, Drugs, Rock & Roll; Talk Radio; Suburbia, etc.) explores how a modern woman can still rise and fall at whim of the men in her life.

The intimate workshop runs from November 4 - December 5, Thursdays through Sundays at 8:00pm (off for Thanksgiving 11/25 and 11/26) at the Black Box Performing Arts Center: 49 E Palisade Ave in Englewood, NJ (right over the George Washington Bridge). Tickets, $35, can be reserved now at www.BlackBoxPAC.com

Eric Bogosian is known for his six solo works produced Off-Broadway between 1980 and 2000 (three Obie Awards, Drama Desk) and his play, Talk Radio (nominated for Pulitzer Prize and for the 2007 revival, the Tony award). For Oliver Stone's film adaptation of "Talk Radio" (in which he starred), Bogosian received the Berlin Film Festival “Silver Bear.” In 1994, Lincoln Center Theater produced his play subUrbia and the revival was staged at Second Stage in 2006. In 2010, he starred in Donald Margulies’ Broadway production of Time Stands Still alongside Laura Linney, Brian Darcy James, Alicia Silverstone and Christina Ricci.

In addition, Bogosian is the author of three novels as well as numerous plays produced outside New York City. In 2015, Little, Brown published his non-fiction of an Armenian assassination team, “Operation Nemesis.” Bogosian is also known for his work as an actor, currently seen in the television series  “Law & Order”, “Billions” and “Succession.” In 2019, he played "Arno" in the hit film, “Uncut Gems.”  Bogosian lives in New York with his wife, stage director Jo Bonney.

Michael Gardiner, Katie North, and Daniel Yaiullo are featured in 1+1, along with understudy Danielle MacMath, and director Matt Okin. Sets, lights, sound, and costumes are by TBD.

Katie North is an actress, writer and producer based In New York. She has a bachelor's in neuroscience from Princeton University, where she once performed brain surgery on a fly. The fly didn't make it. Some of her favorite professional credits include Lady Macbeth in Lady Macbeth (The Cutting Room), Eliza Doolittle in Pygmalion (Black Box PAC), and Myra Bruhl in Deathtrap (Princeton Summer Theater). Katie's half-hour pilot script, Mourning Glory, has placed in eleven screenwriting competitions and was recently a finalist with the Sundance Episodic Lab. It follows a ragtag group of professional mourners who will stop at nothing to make their company, and their dead clients, look popular.

Daniel Yaiullo is happy to be back at BBPAC after appearing in Sarah Ruhl’s How to Transcend a Happy Marriage in 2019. He was most recently seen on stage last month as Sal in Torture Chamber as part of The Players Theatre Short Play Festival, and in July he played Berowne in Love's Labour's Lost with Hudson Classical Theater Company. Some other highlights include Twelfth Night (dir. Ian Belknap), Hurlyburly (dir. Robert O'Hara), Dress of Fire with Austin Pendleton, Women Behind Bars with Amy Stiller, Kenneth Branagh's Macbeth at the Park Avenue Armory, and Fourteen Little Red Huts, which performed in Voronezh, Russia. He has participated in readings with Red Bull Theater and The Acting Company, graduated from NYU Tisch, and studied in Oxford at the British American Drama Academy.

Matt Okin formed Bergen County's Black Box Studios in 2007 and founded The Black Box Performing Arts Center in November 2015, now reopened in Englewood, NJ. His original plays, produced both in New York and on national tours, include: Beltsville/Rockville, Part One: Rise of the Goatman; #OneInnocentWoman;Twist Of Faith (currently being redeveloped for film); Walter Liked To Sit In His Big Backyard; and Cherry Hill. Matt's original musicals include Soul Searching (45th Street Theater, DR2 Theater, and NYMF) and A Match Made In Manhattan: The Interactive Jewish Wedding Experience. Select directing credits include: Neil LaBute's 10x10; Fat Men In Skirts; The Pillowman; Edward Albee's Who's Afraid of Virginia Woolf?; Pygmalion; Eric Bogosian's Talk Radio & Griller in rep; Buried Child; Hand To God; Disgraced; Cloud 9; The Goat, Or Who Is Sylvia?; Evil Dead The Musical; Bad Jews; and Passing Strange (all at BBPAC), and the BBS Ensemble’s House Of Blue Leaves and Next To Normal (bergen PAC). Matt received a BFA in Dramatic Writing from New York University's Tisch School of The Arts. His first work for the screen in almost a quarter of a century is Issues, currently 'making the rounds' in Hollywood.

Black Box Performing Arts Center (BBPAC), a 501c3 nonprofit organization founded in Teaneck 2015 and relocated to 49 East Palisade Avenue in Englewood in 2019, and Black Box Studios (BBS), which has operated in Bergen County since 2007, together form Northern NJ’s premiere theater and performing arts school combo. BBPAC is a working professional theater run by The Black Box Rep Company, a small, tight-knit group of collaborative artists, which self-generates full seasons of cutting edge theater, reviving classics both old and newer, while also developing original works for the intimate stage. Many of these professionals double as teaching artists for Black Box Studios, running classes and workshops at the theater and at various schools and organizations in the area, for students currently ranging in age from 9 to 81. Our team is also focused on presenting other art forms within the space, such as comedy and music, as we host the emergence of a new and unique artistic community.