“Immersive” is the sort of word that conveys its meaning more as a sensation than a perception.

And using it as part of the subtitle for "Field Companion: An Immersive Video Installation" – the new, created-for-this place-and-this-moment-in-time work by Nadia Hironaka and Matthew Suib – is spot-on.

Together with the couple's "Moon Viewing Platform" (made in 2019 with Eugene Lew), "Field Companion" is on view now through October 30th at Rowan University Art Gallery (and I strongly suggest including a visit to see these works on your to-do list for early autumn). 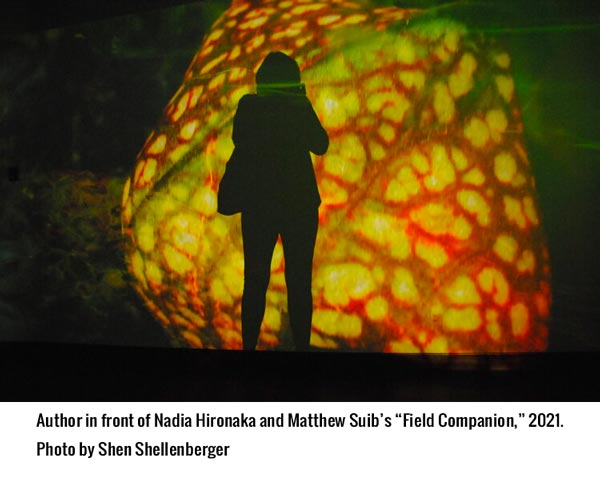 This fascinating film unfolds on an 8' x 10' free-standing screen in the center of the gallery, flanked behind and alongside by two wall-sized screens that offer a subtly shifting visual backdrop. You can sit on the padded stools and watch, or you can stroll the gallery. And, if you position yourself right, you can see a shadow image of yourself projected onto one of the backdrops.

The commentary, delivered throughout by an array of creatures, was written by Hironaka. Although the narrative is familiar and intense – one of concern for the Earth and its inhabitants – it is not somber or heavy-handed. And the music – ahhhhh, the music – was composed by Green-House, a project of Los-Angeles-based artist Olive Ardizoni, and its gentle pace and overall ambiance skillfully moves the story along. 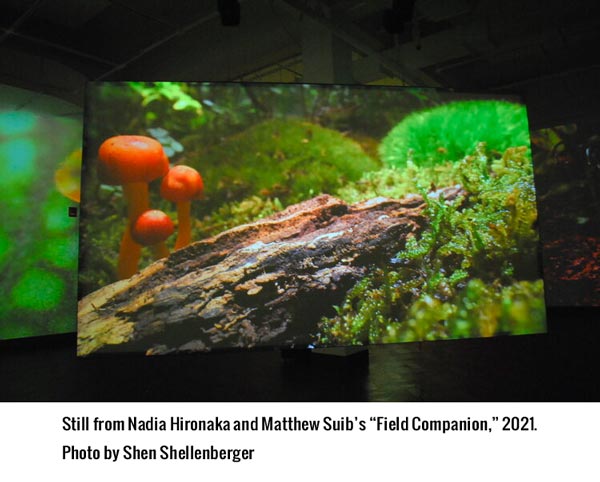 So, what is the story?

"It's entirely about nature," said Mary Salvante, Curator, Gallery and Exhibitions Program Director at Rowan University, "and it's presented in ways that draw on the connections that thread us all together."

The film also touches upon the notion of forest-bathing, the Japanese practice of exploring the natural environment through our senses.

The project that became "Field Companion" got its start after Salvante had seen previous work by Hironaka and Suib and invited them to Rowan to discuss the possibility of exhibiting there.

The three met for the first time in January 2020. Hironaka and Suib returned in the spring with a proposal to create a new piece specifically for the Rowan Gallery. Salvante was thrilled. 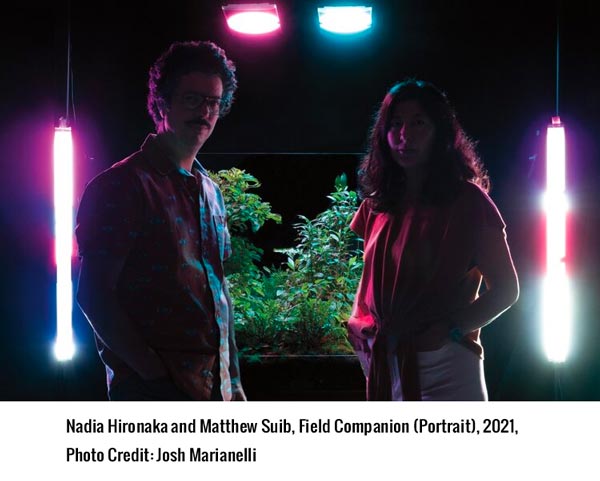 The art gallery had been open to visitors since the winter and hosted a few exhibitions, but Salvante was still concerned about making any long-range plans. That was why the idea of a commissioned film was so appealing.

"The simplest thing to do without a lot of gallery prep is video," she said. "It was a win-win."

Meanwhile, Hironaka and Suib started working in earnest on the idea they had come up with.

"In the early months of the pandemic, we were spending a lot of time outside, mostly in the New Jersey Pine Barrens and other natural sites in the area," Hironaka said, "and we began collecting plants and other things we found to use for a film."

They initially thought about using their daughter's play/school room as a setting to create their own environment and do the filming. But they instead decided to construct a large terrarium (think of a fish tank on steroids) and furnish it with actual plants foraged from the Pinelands and the Hudson Valley area of New York, where they were doing an artist residency.

While Suib said this video is quite different from other things they've done, he added that they did borrow from "Moon Viewing" for inspiration. 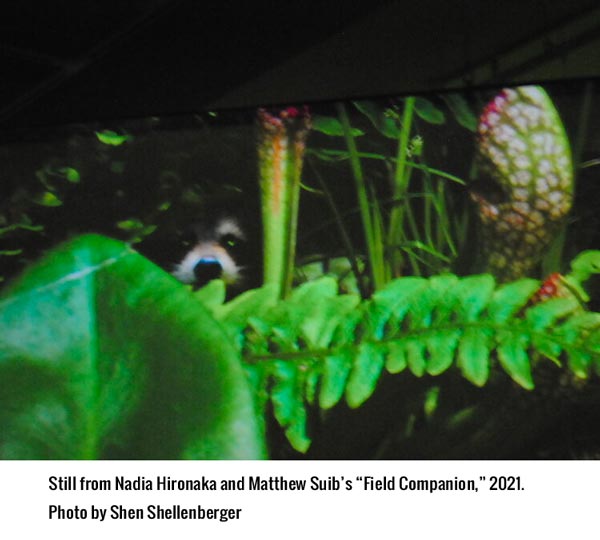 "The themes for ‘Field Companion’ came out of thinking broadly about community," Suib said, "and considering what kinds of relationships sustain a community."

Though this community is made up of non-human elements – plant life, mammals, birds, reptiles, invertebrates, and the like – the film never trivializes the impact of their words.

"It is a classic environmental message; we are woven together," Salvante said. "It doesn't matter if it is a fairy or a raccoon or a slug that is talking; it's still the same message."

Hironaka smiled when I mentioned parts of the film that delighted me. “We like to use animals," she said. "It allows for the unexpected."

"At times, I would ask Matt if something was okay-weird, or just weird?" Hironaka said. "We were constantly making ourselves laugh in the studio in ways that we haven't done before." 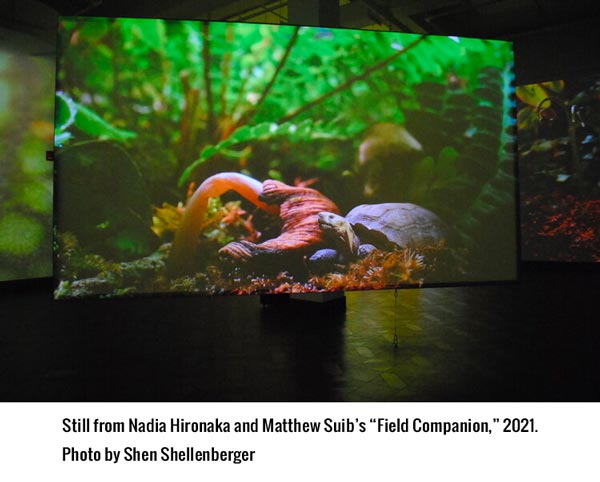 And in those incidences when a particular element illuded them or when what they collected didn't quite fit the scene, they digitally created what they needed.

"There was a lot of set dressing," Suib said.

POSTSCRIPT – ARTISTS’ NOTE: We penned the bulk of the script, but a couple of lines are taken from “Entangled Life: How Fungi Make Our Worlds, Change Our Minds& Shape Our Futures” by Merlin Sheldrake and “The Mushroom at the End of the World” by Anna Tsing. These two books, along with a few others on the reading list at the gallery (included below), really informed and inspired and thinking for the work.

Photos in cover include stills from Nadia Hironaka and Matthew Suib’s “Field Companion,” 2021, courtesy of the artists, Rowan University Art Gallery, and Shen Shellenberger
About the author: Jersey Girl, music lover, and culture geek – Shen Shellenberger has made a career of her life-long love of the arts. From her jobs at WXPN-FM and the Philadelphia Museum of Art, to her 25 years as a freelance writer, she instills her Jersey-born roots in all she does. Whether it’s the beauty of a classic painting, the dynamics of contemporary dance, or the raw energy of rock ‘n’ roll, Shen brings her perspective to whatever she covers.
Content provided by Discover Jersey Arts, a project of the ArtPride New Jersey Foundation and New Jersey State Council on the Arts.