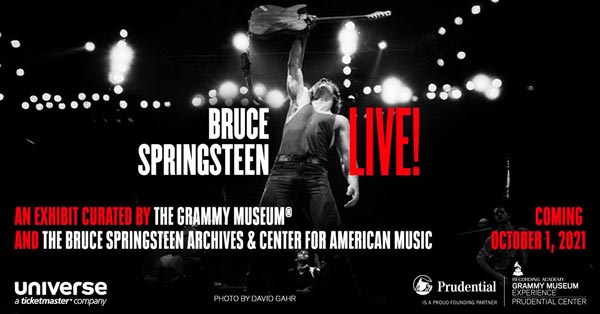 Tickets for the Bruce Springsteen Live! exhibit are available for purchase online, ranging from $7.00 to $10.00. GRAMMY Museum Experience(TM) Prudential Center is open Thursday through Sunday 11:00am to 6:00pm on non-event days and 11:00am to 8:00pm on event days.

Curated by the GRAMMY Museum(R) in Los Angeles and Bruce Springsteen Archives and Center for American Music, Bruce Springsteen Live! provides fans with an intimate look into Springsteen’s creative process, shedding light on how he became—and remains— one of the greatest live performers in rock and roll history. As 2021 marks the 35th anniversary of Springsteen’s first live album release, the exhibit explores the evolution of Springsteen through the decades and grants exclusive backstage access to Springsteen and the E Street band’s legendary performances.

“As we reopen the doors to our museum and so many of us return to the workplace, it only seemed fitting that we would look to ‘The Boss’ to lead the way.” said Mark Conklin, Director of Artist Relations and Programming at GRAMMY Museum Experience™ Prudential Center.   “No musical artist has captured the spirit and resiliency of New Jerseyans in song better than Bruce Springsteen, so we couldn’t imagine a more appropriate exhibit at this moment.”

Notable Artifacts and Interactives Include:

* Tunnel of Love Ticket Booth Stage Prop: From the 1988 Tunnel of Love Tour, this iconic ticket booth symbolized the audience’s admittance to the onstage narrative of the rollercoaster of love, loyalty, commitment and faith.

* Stage Clothing: Outfits and accessories from Springsteen and members of the E Street Band.

* Signed Human Rights Tour Itinerary: From the 1988 six-week benefit world tour, raising funds for Universal Declaration of Human Rights and the 40th anniversary of its sponsor, Amnesty International, this itinerary commemorates the powerful collaboration of music and activism, featuring the signatures of the tour’s various performers that include Springsteen, Sting, Peter Gabriel, Tracy Chapman, Youssou N’ Dour, and more.

* Clarence Clemons Saxophone: Nicknamed “The Big Man,” the legendary saxophonist played alongside Bruce for 40 years. Upon Clarence’s death in 2011, the iconic instrument was passed on to his nephew Jake Clemons who, since 2012, continues to use it in performance as the newest member of the E Street Band.

* Create Your Encore Interactive: Bruce is known for his encores! This interactive kiosk will allow visitors to view Bruce’s handwritten set-lists and create their own encores to compare against Springsteen’s original.

“Few performers embody the soul and excitement of live rock and roll like Bruce Springsteen and the E Street Band,” said co-curator Robert Santelli, Founding Executive Director of the GRAMMY Museum(R), and a longtime New Jersey music journalist.  “This exhibit will undoubtedly get fans excited about seeing Springsteen again in concert, hopefully soon.”

“We are honored to work with the Grammy Museum on this unique Bruce Springsteen exhibit,” said co-curator Eileen Chapman, Director of the Bruce Springsteen Archives and Center for American Music.  “Opening it here in New Jersey makes it extra special; since so many of Springsteen’s greatest shows happened here.”

Built and operated by Prudential Center in Newark, NJ, the 8,000-square-foot GRAMMY Museum Experience (TM) is housed within Prudential Center. The Experience marks the first GRAMMY Museum outpost to be built on the East Coast and, similar to the original GRAMMY Museum in Los Angeles, the Experience will be dedicated to exploring the past, present and future of music, and the cultural context from which it emerges, while casting a focused spotlight on the deep musical roots of New Jersey. The Experience features a dynamic combination of educational programming including Summer Session, “Spotlight Series” and “An Evening With Series” and interactive permanent and traveling exhibits, including a spotlight on legendary GRAMMY winners from New Jersey.

The Bruce Springsteen Archives is comprised of nearly 35,000 items from 47 countries ranging from books and concert memorabilia to articles and promotional materials.  The collection serves the research and informational needs of music fans, scholars, authors and others with a serious interest in the life and career of Bruce Springsteen.

The Bruce Springsteen Archives serves as the archival repository for Bruce Springsteen’s written works, photographs, periodicals, and artifacts. The Center also preserves and promotes the legacy of Bruce Springsteen and his role in American music, while creating exhibits, public programs and education initiatives that explore the works of American music giants like Woody Guthrie, Robert Johnson, Hank Williams, Billie Holiday, Janis Joplin, Frank Sinatra, and others.

Established in 2008, the GRAMMY Museum is a nonprofit organization dedicated to cultivating a greater understanding of the history and significance of music through exhibits, education, grants, preservation initiatives, and public programming. Paying tribute to our collective musical heritage, the Museum explores and celebrates all aspects of the art form—from the technology of the recording process to the legends who've made lasting marks on our cultural identity.