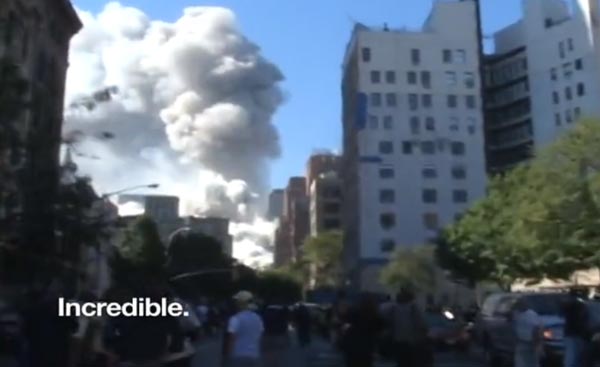 David Vanadia woke to a voice screaming into his answering machine.  “Please pick up! If you’re there, please pick up!” He answered the phone, and was told a plane had crashed into the World Trade Center.

Vanadia grabbed his camcorder, ran out of his studio apartment, and began recording on the streets of Manhattan. He didn’t stop until he made it to Ground Zero and back.

Along the way, he encountered panicked New Yorkers, and captured their candid reactions.

Nobody saw the footage for ten years — not even Vanadia.

In 2011, Vanadia edited the footage into an hour-long documentary, which takes viewers through the pandemonium of the attack, yet somehow manages not to shock its audience.

The video is surprisingly human, and very New York: a school girl cries for her parents, a plein air painter sketches the tower as it burns, a lone rocker strums a guitar in Washington Square Park, a young man repeatedly screams his lover’s name into the sky.

My 9/11 contains things you've never seen in television renditions of the historic event. The film can be seen here.