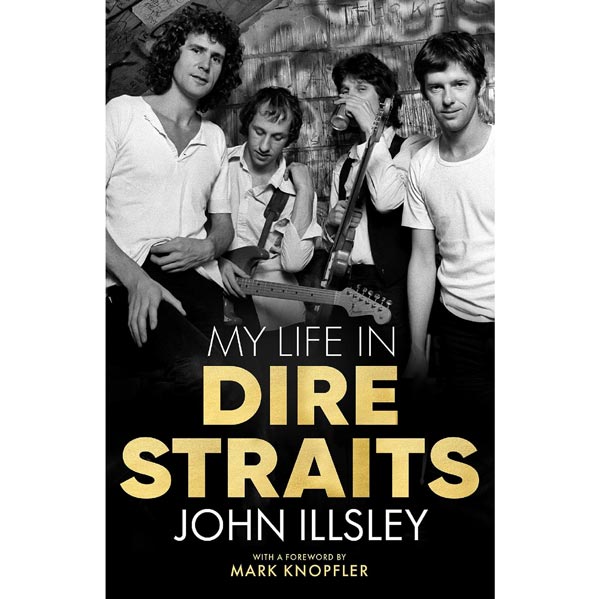 In My Life in Dire Straits: The Inside Story of One of the Biggest Bands in Rock History (Diversion Books; November 9, 2021; $30.00 Hardcover; ISBN 978-163-576-9159), bassist and founding member John Illsley goes behind the music with never-before-told stories tracing Dire Straits’ rise from the spit-and-sawdust pubs of London to the best-known venues and concerts in the world, and inside the studio recording some of the greatest rock albums of all time.

With wry humor and soulful reflection, Illsley captures a phenomenal musical legacy, the shattering demands of global tours and life in the spotlight, and his friendship with Mark Knopfler, the band’s lead singer, songwriter and remarkable guitarist.

“This book above all is about passion and pursuing your dreams – taking the unpredictable path, not the easy option,” Illsey says. “It charts the journey from my innocent teens strumming a few chords, to playing on the biggest stages in the world; a chance meeting in 1976 with Mark Knopfler that created a musical partnership that lasted 20 years, and a strong friendship that continues to this day. Dire Straits was an idea that created a phenomenal musical legacy, an extraordinary journey of joy, fun, companionship and surprises. I am immensely proud of my contribution to this journey.”

With a foreword by Mark Knopfler himself, this the first, and only, inside story of one of the greatest bands in rock history.

“For us, it was a huge adventure and a hell of a ride, with all its comedy, absurdity, exhaustion, madness, and sadness….” Knopfler writes in the foreword. “This ride is not for everyone, not for those who can’t take the pressures and the pace…. It was a different world. And John has remembered a pretty big chunk of it.”

There was, quite simply, no bigger band on the planet throughout the eighties. Brothers in Arms was one of the best-selling albums of the decade and songs like “Sultans of Swing,” “Money for Nothing” and “Romeo and Juliet” remain rock classics. But the Dire Straits rags-to-riches story has never been told by one of their own until now.

Illsley rose to fame as the bass guitarist for the critically acclaimed band and has received multiple Grammy Awards. As a founding member and - along with Knopfler - one of two band members to stay the 15-year distance, Illsley played a major role in the development of the band’s sound. Since the band’s last tour in 1993 he has earned a reputation as a painter, with solo exhibitions in London, New York, Sydney and across Europe. Illsley also has eight solo albums to his name, and he now owns a pub in the New Forest, United Kingdom.

“A forensic and uplifting journey through the sheer hard work, pitfalls, and thrills of navigating a great rock and roll band to the pinnacle of success. I so enjoyed the ride! Onwards, John!” - Roger Taylor, drummer, songwriter and founding member of Queen