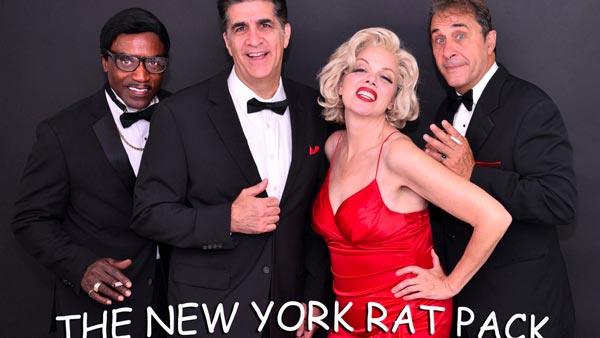 (CAPE MAY, NJ) -- Frank Sinatra, Sammy Davis, Jr., and Dean Martin made history when they teamed up in the 1960s to form one of the most famous groups of all time. Jerry Costanza (Sinatra), Joe Perce (Martin), and Larry Hines (Davis, Jr.) are all award-winning impersonators who have made the NYC Rat Pack as timeless as their actual counterparts. Cape May Stage's 2021 Broadway Series presents The New York Rat Pack at Convention Hall on Monday, August 16 with performances at 2:00pm and 7:00pm.

Take a trip back through time to when The Rat Pack ruled New York with classics like: "That's Amore;" "New York, New York;" "My Way;" "Mr. Bojangles;" and "One for My Baby," among others. Broadway veteran Louisa Bradshaw makes a special guest appearance as the unforgettable Marilyn Monroe, delivering flirtatious renditions of "Diamonds Are a Girl's Best Friend," "You've Got to Choose Me," and other Marilyn Monroe Classics.

Tickets start at $35 and are available for purchase online. Cape May Convention Hall is located at 714 Beach Ave in Cape May, New Jersey.

Following this performance, the next in the Cape May Stage's 2021 Broadway Series is Broadway to Italy: Anthony Nunziata in Concert on Monday, September 13th at 7:00pm. Dubbed "America's next romantic singing sensation," celebrated tenor Anthony Nunziata is back by popular demand as he returns to Cape May with his "Broadway to Italy" concert. Anthony will bring his soulful voice to classic Broadway songs, from jazz, pop standards, and his timeless original music. Get ready to be swept away by this young man's warm and soaring tenor voice.