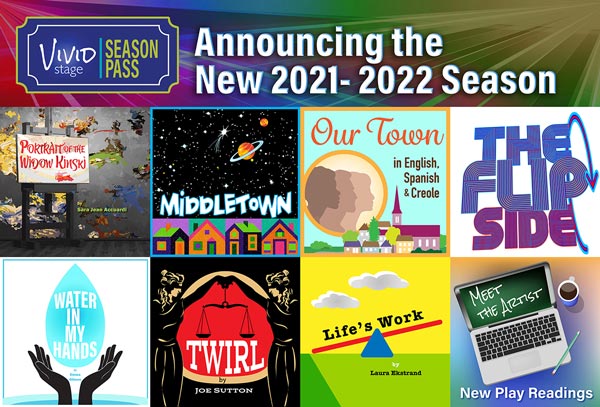 (SUMMIT, NJ) -- Vivid Stage, formerly Dreamcatcher Repertory Theatre, in residence at Oakes Center at 120 Morris Avenue in Summit, has announced its new season. This professional company will bring four productions, including three world premieres and one workshop production, to the stage in addition to improvisational comedy, play readings, and educational programs for teens and adults.  As always, the Vivid Stage Resident Acting Company and their guests will tell stories that reflect our shared experience of being human with heart and humor.

Vivid’s fall mainstage production is the World Premiere of The Portrait of the Widow Kinski by Sara Jean Accuardi. A promising artist falls into obscurity. Decades later, his widow works tirelessly to find an audience for his neglected work. But the opportunity to finally secure her husband’s legacy forces her to take a hard look at the past and what was left behind. The Portrait of the Widow Kinski will open on September 30 and will run until October 10.

The second mainstage production of the season, opening in December, is the World Premiere of Water in My Hands by Emma Gibson. Sorrel is busy preparing for her wedding even though her fiancé has just died, and Maria’s eyebrows are still not growing back. Gerry wants to know if the weather will improve so that he can lie on his back in the grass. Through a series of interweaving accounts, Water in My Hands lays bare the power of grief, and asks, ‘How do we move on when we are haunted by the life that we have not yet lived?’ Water in My Hands runs December 2 through 12.

Next is the workshop production of the new play Twirl by Joe Sutton. Do you recall the famous phone call Ginni Thomas, wife of Justice Clarence Thomas, made to Anita Hill years after her original testimony? Ginni Thomas left a message on Anita Hill’s answering machine asking her to apologize. Why? That is the question explored in Twirl, which was inspired by that original phone call. The Justice involved is nothing like Clarence Thomas, but the issues surrounding that call are very similar indeed. And they all raise the question -- what did she hope for? Twirl runs February 17 through 27.

Vivid’s final mainstage production of the season will be the World Premiere of Life’s Work by Laura Ekstrand. In this comic drama, two couples discover what happens when their agreements around work and money shift and evolve. Chip suddenly decides to quit his corporate job, blindsiding his wife Lynn, who is just returning to her career after years as a primary caregiver. Shelly, a photographer who earns her living as a barista, navigates her relationship with the practical Eduardo, a restaurant manager. This play asks, ‘Is it possible for a partnership to survive when the ground rules change? Life’s Work runs from April 21 through May 1.

Vivid’s improv comedy group The Flip Side will bring its own brand of silliness and spontaneity to life for two evenings during the season. The first TFS show will be on Saturday, September 11, 2021 and the second will be Saturday, March 19, 2022.

Improv classes for teens and adults are available throughout the season, with four sessions enrolling now. A bilingual improv class for teens is offered in collaboration with Summit’s Empowering Kids organization.

Two special events occur early in the season. The first is a reading of Will Eno’s Middletown featuring the entire Vivid ensemble on September 18. Middletown is a deeply moving and funny play exploring the universe of a small American town. On October 16, Vivid will present a reading of Thornton Wilder’s Our Town with passages translated into Spanish by Nilo Cruz and Creole by Jeff Augustin. This multilingual treatment of the classic play emphasizes the diverse nature of our region while highlighting our shared human experience.

In May, four “Meet the Artist” new play readings will be held each Wednesday, thought-provoking experiences which include the opportunity for audience discussion with the writer, director and actors after the performance.

Dreamcatcher Junior, the three-week summer program for students entering grades 5-12, will culminate in its annual production on Friday, July 29, an original family show that always draws on the creativity of its young actors to shape the piece.  Each year, the youth company creates a one-of-a-kind piece that has ranged from fairy tale quest to Shakespeare adaptation to musical revue.

Vivid’s podcast, LOCAL with Laura Ekstrand, runs throughout the season featuring conversations with guests in the creative community of New Jersey and beyond. LOCAL can be found on itunes and through the Vivid Stage website.

Throughout the year, Dreamcatcher offers internships for high school and college students and many volunteer opportunities.  In addition, the theatre provides a menu of outreach programs for students and seniors that travel to other venues.  All of Dreamcatcher’s activities center on the collaborative nature of theatre and creating a comfortable environment for artists and audiences of all ages to explore and grow together.  The company’s work is supported by grants from the New Jersey State Council on the Arts, the Geraldine R. Dodge Foundation, and several other corporate and individual donors that believe in the power of the arts to bring people together and promote understanding between them.

Season passes may be purchased that provide substantial discounts to all events, and special rates for groups are also available.  The theatre at Oakes Center is wheelchair accessible, and such access services as large print scripts, assistive listening devices, and audio description will be available by prior arrangement throughout the season.  Performances will be held at Oakes Center, 120 Morris Avenue, Summit, New Jersey.

Vivid Stage was founded in 1994 as Dreamcatcher Rep, and is a non-profit professional ensemble of actors who build community with the audience by sharing contemporary, life-affirming stories that challenge, energize and entertain. Our work has at its heart a belief in the essential goodness of people and the power of live performance to connect people through our shared humanity. We expose theatregoers to ideas and lives like and unlike their own with the intention of awakening their imaginations and creating empathy for others. We deepen the experience of all our patrons with personal contact through receptions, talkbacks, and interactive programs.

The company’s activities include mainstage productions, improvisational comedy and cabarets, new play readings and a variety of educational and senior outreach programs.