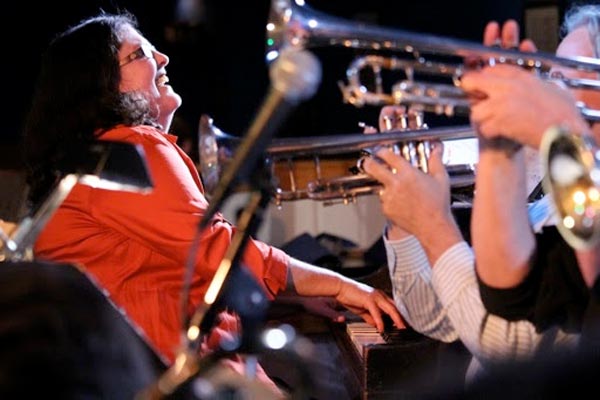 The concert and fundraiser will bring together longtime members of Diane Moser’s Composers Big Band at Tierney’s, the site of the ensemble’s January 1997 debut gig.

In addition to saluting the memory and legacy of Diane Moser, the beloved big band leader, jazz pianist, composer and educator, the event will raise money for the Dizzy Gillespie Memorial Fund. For more than 20 years the fund has provided pro bono medical care for thousands of jazz musicians. Moser was among those receiving care at the Dizzy Gillespie Cancer Institute at Englewood Hospital. She lived with cancer for more than 12 years before passing on Dec. 17, 2020. The July 27 concert date marks the 64th anniversary of her birth.

Diane Moser’s Composers Big Band was formed by Moser and a dedicated group of musicians and composers to explore the possibilities of big band music and move it forward. The band lived up to its mission starting with regular gigs Tierney’s, its first home base.

Over more than two decades, Moser built a cult following for her big band in the New York metropolitan area, showcasing always-inspired works by herself, band members, composers in residence, and more than 100 guest artists, including jazz icons such as Jane Ira Bloom, Mark Dresser, Howard Johnson, Oliver Lake, and Michele Rosewoman.

Diane Moser’s Concert Big Band was recognized multiple times in DownBeat’s critics poll as a rising star big band. You could count on enjoying a warm, family vibe at every DMCBB gig, presuming your family is enormous, talented, and eager to work and play together at every opportunity. Several original band members could be found on the bandstand at every gig during the DMCBB’s long tenure at Tierney’s, Trumpets, and other venues.

The big band will focus on Moser’s compositions, as well as work by the late saxophonist and DMCBB stalwart Ed Xiques. Music by DMCBB resident composers Storckman, Middleton, Henke, Jim Cifelli, Matt Haviland and Russ Vines will round out the program.

Also scheduled to appear at the July 27 tribute: Mark Dresser & Friends. Dresser, a renowned San Diego-based bassist and composer, shares a more than 40-year musical history with Diane Moser, documented on recordings such as 2012’s Duetto and 2014’s Music for the Last Flower on which multi-instrumentalist Marty Ehrlich also appears. Dresser expects his set at the memorial concert and fundraiser to include material from both recordings, among other Moser compositions. Rounding out the quartet are pianist Angelica Sanchez and drummer Michael Sarin.