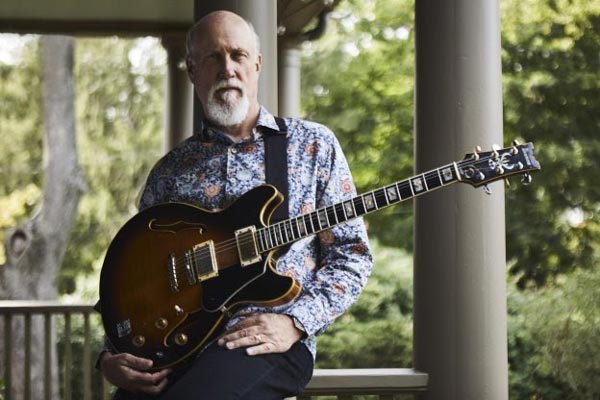 A celebrated improviser and composer whose work melds jazz with rock, blues, funk and a touch of country music, Scofield, who lives in New York, said he is looking forward to performing at Kean and entertaining a live crowd again.

“It’s the New York area, where I’m from. I feel very much at home,” said Scofield, who said he was “ecstatic” to return to the stage this spring after the COVID-19 pandemic-imposed hiatus.

Steve Cochran, manager of Kean Stage, said the concert is a “restart” for the University’s concert series, the first of three live musical performances on the outdoor stage on Kean’s East Campus. “We’re very excited about it,” he said.

Scofield began playing guitar in the 1960s at age 12, teaching himself songs from the radio and forming his own band, the Skylarks. He began touring professionally in 1974, after attending Berklee College of Music.

The influential guitarist has recorded more than 30 albums, and regularly performs throughout Europe and in venues ranging from Lincoln Center, in New York City, to Terrapin Crossroads, a California club owned by Grateful Dead co-founder Phil Lesh.

“Jazz is part of all music that exists right now in popular music. Whether we know it or not, jazz is there,” Scofield said. “When we all play together, everybody gets to do their own thing, but we trust each other. The whole is greater than the sum of its parts.”

During the pandemic, Scofield did a few online performances, including a streamed concert with a group of friends calling themselves “Bandemic.” But like so many people, he said he spent most of his time at home.

“At first I really kind of panicked. I thought, ‘I’m going to lose my technique.’ You have to train to be a jazz musician,” he said. “When I played my first gig after the pandemic, I was ecstatic because I was getting to do it for a live audience. It felt like home again.”

Described as a guitarist who “lives in the space where rock meets the funky blues,” Scofield said he is constantly still learning. ”I have so much stuff I’m studying, and writing music on my own, and practicing,” he said.

He takes little time for self-congratulation. Of his Grammy wins in 2016 and 2017, which came after four previous nominations, he said “it was nice to finally win. It’s nice to be recognized.”

The statuettes are still in the cases they came in, however, tucked away in his basement.

“I just feel weird putting them on the mantle. I’m proud of my accomplishment, and sometimes I think maybe I should do that,” he said. “But, I’d rather be humble.”

The John Scofield Trio featuring Vicente Archer & Bill Stewart performs on Saturday, July 17 at 6:30 p.m. the Lawn at Enlow Hall (215 North Ave, Hillside, NJ). Tickets are $45 and chairs will be provided. In the event of rain, the performance will be moved to Sunday, July 18 at 6:30pm.