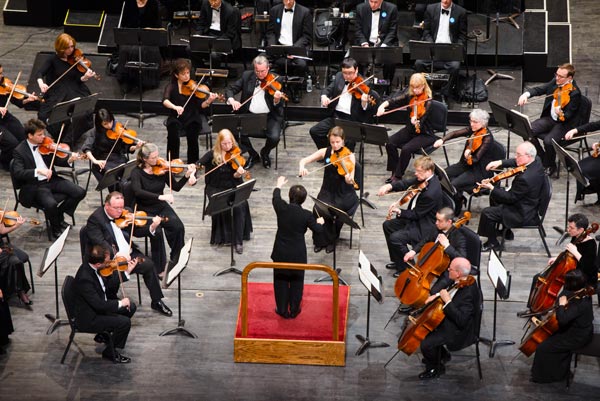 (NEWARK, NJ) -- The New Jersey Symphony Orchestra has announced the composers for the seventh NJSO Edward T. Cone Composition Institute, presented July 19–24 in Newark. The composers include Elise Arancio (Curtis Institute of Music) and her work Wake, Kevin Day (University of Georgia) and his work Tango Oscuro, Erin Graham (UC San Diego) and her work Increase, and Jared Miller (The Juilliard School) and his work Under Sea, Above Sky.

By the conclusion of the Institute’s immersive laboratory experience, participants will have gained invaluable musical and practical feedback about writing for orchestra and how to get their music published and performed.

Elise Arancio is a composer from Atlanta, currently based in Philadelphia. Her orchestral and chamber works have been performed across the country and internationally by ensembles including the Atlanta Symphony Orchestra, Curtis Symphony Orchestra, National Youth Orchestra of the USA, Sandbox Percussion and Emory Youth Symphony Orchestra, and by members of the Orlando Philharmonic Orchestra, among others. She has had the opportunity to collaborate with the Rock School of Dance Education in Philadelphia and the One Book, One Philadelphia 2020 and 2021 program, and her work was also featured as part of WHYY/PBS’s series “On Stage at Curtis.”

Some of her recent accolades include being selected as a winner of the 2020 Kaleidoscope Chamber Orchestra’s Call for Scores, 2018 American Composer’s Forum NextNotes Composition Awards and the 2016 and 2017 National Young Composers Challenge. She has attended summer programs at Interlochen Center for the Arts, Curtis Young Artists Summer Program, Yellowbarn Young Artist Program and Atlantic Music Festival, and she was a composing fellow at the Lake Champlain Chamber Music Festival. She joined Carnegie Hall’s National Youth Orchestra as an apprentice composer in the summer of 2018.

This piece was partially inspired by Amy Hempel’s short story “In a Tub,” which follows a woman who had recently suffered a personal trauma, resulting in a loss of self. The story begins with the line “My heart-I thought it stopped.” The narrator spends the rest of the story searching for her heartbeat, which she uses as a symbol of her humanity. Eventually she finds it when she is submerged in a tub, after she had waited “for the ripples to smooth away” and listened for “the playfulness of [her] heart.”

Wake (v.) To emerge from a state of sleep.

While this piece occurs in the wake of a traumatic event, the overwhelming focus is on using inner momentum to awaken from a slumber of desolation and return to a place of joy. It is ultimately about finding life amidst death, and while not ignoring dark echoes, overcoming them, to reach a place where the heartbeat can clearly be heard among the sounds of renewed vitality.

An American composer whose music has been “characterized by propulsive, syncopated rhythms, colorful orchestration and instrumental virtuosity” (Robert Kirzinger, Boston Symphony Orchestra), Kevin Day (b. 1996) has quickly emerged as one of the leading young voices in the world of music composition today. Day was born in Charleston, West Virginia, and is a native of Arlington, Texas. He is a composer, conductor, producer and multi-instrumentalist on tuba, euphonium, jazz piano and more; his music often intersects between the worlds of jazz, minimalism, Latin music, fusion and contemporary classical idioms.

A winner of the BMI Student Composer Award and several other honors, Day has composed over 200 works and has had numerous performances throughout the United States, Russia, Austria, Australia, Taiwan, South Africa and Japan. His works have been programmed by the Boston, Detroit, Houston, Fort Worth and Tulsa Symphonies; Fresno Philharmonic and more. He was selected as the third-prize winner of the 2020 New Classics International Young Composer Contest of the Moscow Conservatory. His works have also been performed at Carnegie Hall, Rachmaninov Hall (Russia), The Midwest Clinic, TMEA and other major venues.

Day is currently pursuing a Doctor of Musical Arts degree in composition at the University of Miami Frost School of Music, where he studies composition with Valerie Coleman, Lansing McLoskey, Charles Norman Mason and Dorothy Hindman, as well as jazz piano with Shelly Berg. Day holds a Master of Music degree in composition from the University of Georgia and a Bachelor of Music degree in euphonium/tuba performance from Texas Christian University (TCU). Day currently serves as the vice president for the Millennium Composers Initiative and is an alumnus of Kappa Kappa Psi National Honorary Band Fraternity and Phi Mu Alpha Sinfonia Fraternity of America.

Tango Oscuro (“Dark Tango”) is a chamber orchestra work that was composed over the span of five days’ time, from an out-of-the-blue inspiration. This intense composition depicts a dark, wild and passionate dance between two aspiring lovers. Tango Oscuro is dedicated to the Gabriela Lena Frank Creative Academy of Music, and to my friend and mentor Gabriela Lena Frank, who inspired me to experiment and try new things, helped me to believe in myself and encouraged me to embrace my voice as a composer.

Erin Graham is a composer of contemporary classical music and an active percussionist. She seeks to explore concepts of visceral energy, unconventional forms of repetition and elements of humor by incorporating abstractions of familiar rhythmic idioms into her music.

Graham received Rice University’s Paul and Christiane Cooper Prize in Music Composition for her orchestra piece Increase in 2019. In 2018, she was commissioned to write a piece for soprano Julie Moore and members of the Houston Symphony in collaboration with Interfaith Ministries Case Worker Salemu Alimasi and poet Stalina Villarreal as part of the Houston Symphony’s Resilient Sounds Project. In 2015, Graham won an ASCAP Morton Gould Young Composer Award for her chamber work, Five Poems of Edward Lear. She was also the recipient of Eastman School of Music’s Louis Lane Prize and a finalist in the BMI Student Composer Awards. Her composition teachers include Lei Liang, Pierre Jalbert, Karim Al-Zand, David Liptak, Ricardo Zohn-Muldoon, Robert Morris, Carlos Sanchez-Gutierrez and Patrick Long.

Narratives which feature some form of systematic overthrow fascinate me. Increase is a study in various methods of escalating dramatic tension on both small and large scales, and in allowing a seemingly inconsequential idea to gradually rise to the foreground. The piece features three contrasting primary motives, each of which requires a different strategy for intensification. Two of these motives—a simple melody and a repetitive, almost mechanical six-note figure—are juxtaposed in conflict to form the overarching structure of the work. The first half of the piece centers around the melody and seeks to escalate the tension by intensifying it. The repetitive rhythmic figure meanwhile lurks in the background. Shortly after the melody reaches its dramatic peak, the rhythmic figure suddenly and forcefully shifts from the background to the foreground while exponentially becoming faster. This provides context for the overarching sense of acceleration which occurs over the course of the piece.

Described as a “rising star” by MusicWorks, the music by JUNO-nominated composer Jared Miller is “playful” (New York Times), “hypnotic” (Sequenza 21), “phantasmagorical” (Lucid Culture) and “highly personal” (CBC Radio). He has worked in collaboration with many ensembles, including the American Composers Orchestra, Detroit Symphony Orchestra, Nashville Symphony, Juilliard Orchestra and the symphony orchestras of Vancouver, Toronto and Winnipeg.

Miller holds Master and Doctor of Musical Arts degrees from The Juilliard School, where he studied with Samuel Adler and John Corigliano. He has also studied composition with Stephen Chatman and Dorothy Chang and piano with Sara Davis Buechner and Corey Hamm at the University of British Columbia. In 2014, at age 25, Miller was named the Victoria Symphony’s composer-in-residence—a position that he held until June of 2017. He is currently based in New York City, where he maintains an active career as a composer and music educator.

Program Notes: Under Sea, Above Sky

When I started writing this piece for the National Youth Orchestra of Canada, I was particularly inspired by the size of this year’s orchestra—perhaps the largest group of instrumentalists that I’ve ever had the opportunity to write for. I was therefore very interested in exploring the massiveness of this ensemble when writing Under Sea, Above Sky. The piece was ultimately written as an ode to planet Earth. On one hand, Earth is massive, majestic and wild. On the other, it is incredibly fragile as climate change continues to wreak havoc upon it. Under Sea, Above Sky aims to capture this duality by contrasting passages of thundering resonance and textures of frail, ethereal tranquility. Ultimately, this piece serves not as an elegy for planet Earth but rather, as a reminder of both its beauty and its vulnerability.

Composed in the spring of 2019, Under Sea, Above Sky was commissioned by the National Youth Orchestra of Canada for its summer 2019 season, and it would not have been made possible without the generous support of the SOCAN Foundation.

The New Jersey Symphony Orchestra connects with the people and diverse communities of New Jersey through the power of live symphonic music to inspire, entertain and educate. Internationally renowned Music Director Xian Zhang has garnered critical acclaim on the podium and has deepened the NJSO’s commitment to presenting diverse voices that reflect the communities the Orchestra serves.

The NJSO embraces its legacy as a statewide orchestra through mainstage and chamber performances at venues across New Jersey, as well as partnerships with fellow Garden State arts organizations, universities and civic organizations. The Orchestra’s education and community engagement programs promote meaningful, lifelong engagement with live music.

The NJSO Youth Orchestras have not only continued virtual instruction but have introduced an entirely new dimension to the program. Students are working together on a yearlong creative composition project—a uniquely engaging opportunity for students to explore their own musical voices and shape new works that draw from all the genres that inspire them.