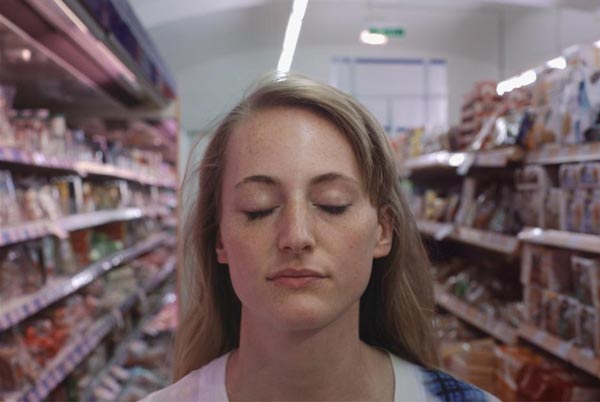 Nigrin: S T O P is an experimental film that documents all different types of people from all over the world while they are in a state of meditation or contemplation with their eyes closed. Tell us why you decided to make this film?

Froehlich: S T O P could be confused as a ‘statement film’ but it sways in the opposite direction. I started out of a personal need, after some years of intensive work, combined with a growing awareness that the average person’s symbiosis with their mobile phones was transforming humankind. We are all subject to an endless barrage of big data trafficked by AI, algorithms, robotics; a plethora of instructions with the cumulative effect of a constant invasiveness that allows no time to understand or reflect, recharge oneself or maintain equilibrium. A little Roma boy in the Paris Metro incited the idea, as I watched how he stood with his eyes closed, squeezed between stressed passengers while seemingly totally relaxed; like in a different orbit. That moment inspired me to record moments without events, progress or logic per say; and combining them to create a serialization of consciousness and sensed exchange of feeling. The experience of watching the film, is intended as a state of suspension, or a delay of expectations. By observing people taking some minutes to say nothing, while seeing nothing, and to bring their focus inside no matter the environment, I recorded an action that is the complete opposite of acting. The intended effect is for audience to feel the same.

Nigrin: There are about 100 individuals who are focused on in your film. Were they selected randomly?

Froehlich: On my trips I just took the decision for the shooting day, and then decided spontaneously by asking people that caught my attention to offer me 10 minutes of their time, allowing me to film them with their eyes closed. The idea was to get as many different people I could concerning age, gender, race, religion and profession. It is of course impossible for that process to be entirely objective, but in a relaxed manner I selected randomly and intuitively, trying to avoid a singular type.

Nigrin: Was it easy to get them to participate? How much directing did you have to do? Tell us about the process.

Froehlich: About 95 percent of the people I talked to, were willing to participate and told me later they enjoyed the experience. I just explained the process randomly that I accumulate moments of silence to create an extending common experience of space and time, for people globally. The beauty about this moment, is this huge trust building up between two strangers due to the fact that if a person closes her or his eyes, all attitude is dropped, since you cannot pose with your eyes shut. It is strangely intimate, but I wanted the film to document that intimacy, which repeats itself to an audience. 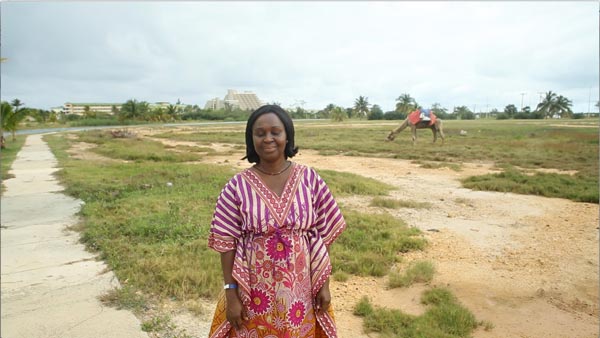 Nigrin: What were some of the locations where you filmed and over the course of how many years did it take for you to shoot your film?

Froehlich: I shot over 15 years, to have the raw material, which I finally decided to edit it in 2019. Since it is an entirely self-financed project, I shot on business or holiday trips I did in Europe, Asia, South America and USA. The selection in this film is just a little part of the recordings. Since this is an ongoing project, I am still collecting as many people as possible, and before Covid hit- a world trip was planned, that now is being scheduled for 2022. I will also organize immersive screenings in museums, and galleries- as I always planned to use multiple screens.

Froehlich: There were many wonderful experiences, but the one I loved the most was when a four years old girl in Havana, after watching me film in the street, sought my attention as we were returning to our rooms. She tried to make herself understood with gestures, that she also wanted to participate. She took my hand, and dragged me 4 floors up to the roof of the building, and positioned herself between the hanging sheets that were blowing in the wind to dry, closing her eyes and totally relaxed. The clouds were racing in the sky, music echoed up to us from the street and we smelled the sweet scent of Mariposa that was planted in an old pot on the roof. This beautiful image has burned itself into my memory as a moment where language, age or the difference of our origins were completely eliminated, and this imperfect world showed itself as perfect.

S T O P plays at the 2021 New Jersey International Film Festival as is part of the Experimental Film Program on Friday, June 11!

More information about the screening can be found below:

Sometimes a little Sin is good for the Soul - Alex Beriault (Bremen, Germany) Sometimes a little Sin is good for the Soul is an experimental short film that takes place within an architectural, almost painterly world. Interior structures, shapes and colours form together the unusual spaces within which three women are suspended. Somehow their actions and mobility remain bound to their surroundings, and time moves slower than the speed of life to underscore the strange conditions of these subjects. All the while, a glowing red “Exit” sign periodically reappears to tease and perturb its cold, taciturn surroundings, but no matter how often the sign reveals itself, it never points towards any clear way out. Digitized 16mm, 2020; 8 min.

My Strange Loop – Shaquille Galvan (Denver, Colorado) In this exploration of the feeling of being overwhelmed, Sara, a Sisyphean figure, attempts to reach the end of a nightmarish hallway, but finds herself stuck in a strange loop. 2020; 12 min.

Amphibians - Drake Howard, Devin Finn (Austin, Texas) Amphibians confronts two universal issues, race and gender. Myster must face the reality of his own dreams or be subjected to a never ending cycle of inauthentic truth. 2020; 12 min.

S T O P – Marieli Froehlich (Vienna, Austria) We are all almost uninterruptedly exposed to countless unfiltered events, both near and far. Reflecting this kind of overwhelming situations the idea for STOP came up. The project can be understood as an action of deceleration, a call for slowdown from a state of sensory overload, a flood of stimuli, that consequently leads to a restriction of our original perception. Contemplation or meditation, an exercise that has had its place in all cultures, offers people the opportunity to experience oneness within themselves and further leads to a feeling of unity with their fellow men. Referring to this project, people from all walks of life, of all ages, religions and race from around the world were and are invited, to take on a sort of meditative sleep state without preparation or artificial setting in their personal environment and stand still for a few minutes, allowing me to record them. During their brief pause the world keeps turning and the grass still grows. The participants are turning towards silence experiencing a gentle stillness spreading throughout themselves. The goal of that continuing project is to collect as many people as possible to participate in the experiment. Experiencing the projection of an “entire world” of people in contemplation also creates a feeling of oneness and inclusion for the viewers. Division and prejudice, whether racial, religious, gender, class or political believes, are thus consequently eliminated in this moment. 2020; 16 min.

Frankston – Patrick Tarrant (London, England) Frankston is a study of the place I grew up, a satellite of Melbourne, Australia with affordable housing, nature-strips and beach views. The downright ordinary nature of the opportunities and festivities afforded by Frankston, and the ambivalence one can feel going back there, nonetheless give rise to a new aesthetic: the suburban symphony. In this case the symphony is rendered in strange hues and luminescences as though affirming Robin Boyd’s depiction of ‘the Australian ugliness’ in 1960, where he claims that “taste has become so dulled and calloused that anything which can startle a response on jaded retinas is deemed successful.” 2020; 21 min.