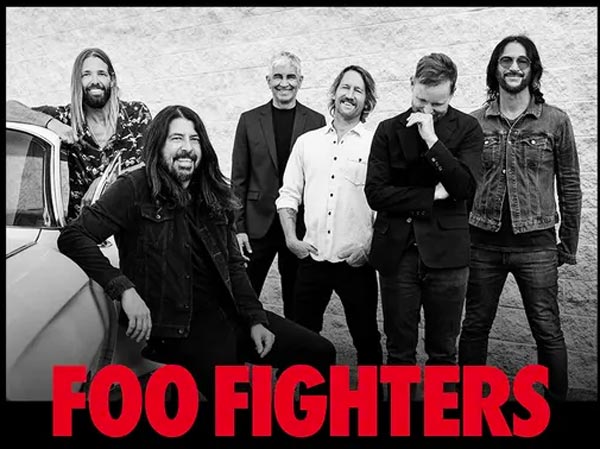 (NEW YORK, NY) -- Madison Square Garden Entertainment Corp. (MSG Entertainment) and Foo Fighters will make New York and music history as they welcome vaccinated fans back to the iconic venue on June 20, 2021 for the first 100% capacity concert in a New York arena since March 2020. This important moment will mark Madison Square Garden’s first concert in more than 460 days and the first 100% vaccinated event at the venue, in yet another resounding endorsement of the return of live music.

“The Garden is ready to rock. We’ve been waiting for this moment for 15 months and are excited to finally welcome a packed house of roaring, fully-vaccinated Foo Fighters fans to Madison Square Garden,” said James Dolan, Executive Chairman and CEO of MSG Entertainment.

“We’ve been waiting for this day for over a year,” said Dave Grohl. “And Madison Square Garden is going to feel that HARD. New York, get ready for a long ass night of screaming our heads off together to 26 years of Foos.”

Foo Fighters first headlined a sold-out Garden in February 2008 on their “Echoes, Silence, Patience & Grace” tour, returning to rock the venue for another sell-out show in November 2011 on the “Wasting Light” tour. Most recently, the band sold-out two nights at The World’s Most Famous Arena in July 2018, on their “Concrete and Gold” tour. The announcement of the June 20 MSG show follows the news of Foo Fighters’ first six U.S. dates on their “25th 26th Anniversary” tour taking place later this summer.

The 1995 release of Foo Fighters' self-titled first album began the ascent of Dave Grohl, Taylor Hawkins, Nate Mendel, Chris Shiflett, Pat Smear and Rami Jaffee to their current standing as the last great American arena/stadium rock band. Along the way they’ve won 12 Grammy Awards, sold tens of millions of records and created anthems like “This Is A Call," “Everlong," "Monkey Wrench," "My Hero," "Learn To Fly," "All My Life,” “Times Like These," "Best Of You," "The Pretender," “Walk,” “These Days,” “The Sky Is A Neighborhood" and more. Foo Fighters’ monolithic catalogue includes The Colour and the Shape, There Is Nothing Left To Lose, One By One, In Your Honor, Echoes, Silence, Patience and Grace, Wasting Light, Sonic Highways (which shared its title with the double-Emmy-winning Grohl-directed HBO docuseries), and Concrete and Gold. Foo Fighters 10th album, Medicine at Midnight, was released February 5, 2021 on Roswell Records/RCA Records.

MSG Entertainment is paving the way for a return to normalcy in live entertainment. The June 20 Foo Fighters show, along with other recently announced shows across MSG Entertainment’s venues, are part of the company’s efforts to restart New York, which also include two sold-out events this month – the closing night of Tribeca Festival featuring “Untitled: Dave Chappelle Documentary” at Radio City Music Hall on June 19 and “Two Evenings With Trey Anastasio” at the Beacon Theatre on June 22-23.