Bruce Springsteen To Accept 2021 Woody Guthrie Prize On May 13 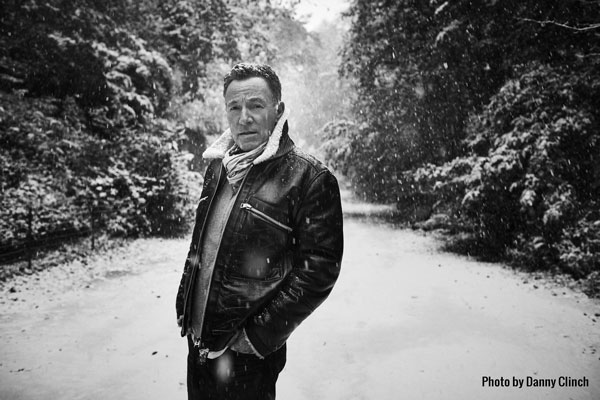 (TULSA, OK) -- Bruce Springsteen will be recognized this year as the latest recipient of the Woody Guthrie Prize, which will be presented virtually on May 13 for Woody Guthrie Center members. For more information on becoming a member, go to woodyguthriecenter.org.

Over 20 studio albums, Springsteen has used his storytelling ability to write songs that connect with people who faced the hard times and celebrated the good times. Often backed by the E Street Band, Springsteen’s music provides a soundtrack of resilience, strength, heart, and joy despite or even in spite of the struggles thrown our way. Drawing from his experiences growing up in New Jersey, Springsteen’s songs have connected on a universal level with fans worldwide. And those who have seen Springsteen perform live have seen his sweat, drive, and dedication to music and to his fans.

“I’m honored to receive the 2021 Woody Guthrie Prize,” Springsteen said. “Woody wrote some of the greatest songs about America’s struggle to live up its ideals in convincing fashion.  He is one of my most important influences and inspirations.”

Springsteen’s connection to Woody Guthrie is direct, frequently discussing how Guthrie’s work inspired his own music and performing Guthrie songs regularly, including “This Land is Your Land” with fellow Woody Guthrie Prize recipient Pete Seeger before the inauguration of Barack Obama in 2009. Springsteen has sold 120 million records worldwide, has earned 20 GRAMMY Awards, an Oscar and a Tony Award, was inducted into the Rock and Roll Hall of Fame in 1999, received the Kennedy Center Honors 10 years later and in 2016, was presented the Presidential Medal of Freedom.

“As an observer of the human condition and a reporter about the plight of common people, Bruce Springsteen is a true child of Woody Guthrie,” said Woody Guthrie Center Director Deana McCloud. “He continues Woody’s work by writing about our struggles in this land of hope and dreams and provided one of our favorite performances of “This Land is Your Land” with Pete Seeger at the first Obama inauguration. The Woody Guthrie Center is proud to present Bruce with this well-deserved recognition for his lifetime of speaking for the disenfranchised and inspiring generations to find the power of their own voices.”

The Woody Guthrie Prize is given to an artist of any medium who continues in the footsteps of Woody Guthrie: A champion for the voiceless with an understanding of how a platform can be used to shine a light on our world, showing us what needs to be fixed and how to fix it. Springsteen has been at the forefront his whole career, connected to the traditions of Guthrie that he continues to exude today. Past recipients of the award include Joan Baez, Chuck D, John Mellencamp, Norman Lear, Kris Kristofferson, Mavis Staples, and Pete Seeger.

“We’ve been hoping that Bruce would join our extended family – which includes the spirit sons and daughters of Woody, Pete Seeger and Lead Belly – as we gather this year to say “thank you for caring and for speaking out.” Welcome, brother!” said Nora Guthrie, president of Woody Guthrie Publications and Woody’s daughter.

Bruce Springsteen’s recording career spans over 40 years, beginning with 1973’s “Greetings from Asbury Park, NJ” (Columbia Records). He has garnered 20 Grammys, won an Oscar and a Tony, been inducted into the Rock and Roll Hall of Fame, received a Kennedy Center Honor and has been a MusiCares Person of the Year. Springsteen’s memoir “Born to Run” (Simon & Schuster) and its companion album ‘Chapter and Verse’ were released in September 2016, and he was awarded the Presidential Medal of Freedom in November 2016. His historic 236-show run of ‘Springsteen on Broadway’ at Jujamcyn’s Walter Kerr Theatre from October 2017 to December 2018 also yielded an accompanying soundtrack album and Netflix special. In 2019, Springsteen released ‘Western Stars’ and together with longtime collaborator Thom Zimny he co-directed a feature film of the same name released through Warner Bros. In 2020, Springsteen made frequent guest DJ appearances on Sirius XM’s E Street Radio channel and released ‘Letter To You,’ a new studio album with the E Street Band “crafted for just this moment” (Entertainment Weekly) that debuted at No. 1 in 11 countries alongside an accompanying documentary from Apple Original Films.

The Woody Guthrie Center, opened in 2013, features state-of-the-art exhibits, an extensive outreach and education program, and a concert series to bring his legacy to Tulsans and those who make the pilgrimage to what is a destination for Woody Guthrie fans worldwide.

The center is more than a museum; instead, it is a center of investigation for inspiration. By providing examples of Guthrie’s ability to use his creativity as a way of expressing the world around him, we hope to encourage others to find their voices and, through their educational programs, explore the power that lies within the creative process.