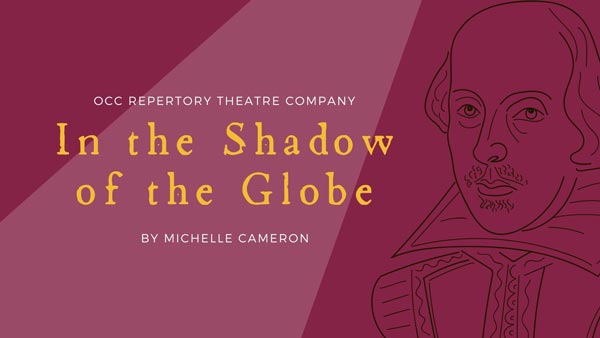 While primarily a book of poetry, In the Shadow of the Globe is also a fusion of genre. Because there is a distinct story line, describing the imagined lives of actual people, it is historical fiction. As it is told in many voices, it can also be considered a piece of theater.

Cameron spent several years researching the actors of the Globe, and many of the events described in the book are based on the history of the theater. Yet this is primarily a series of intertwined stories of love and ambition in a kind of poetry-meets-Shakespeare in Love.

The publisher’s catalog calls In the Shadow of the Globe a “narrative poem using the colorful and daring characters of the Globe Theatre during the life of Shakespeare to create the incredible voices of its actors, bit players, poets, stage managers and lovelorn ladies of his day. Shakespeare, his wife, his Dark Lady and his poor dead boy all spring from the pages with fact and fiction intertwined into a virtuoso book that will redefine the classroom’s experience of Elizabethan studies. A new and provocative approach to a beloved subject.”

Michelle Cameron is a director of the Writers Circle, a New Jersey-based organization that offers creative writing programs to youth and adults, and the author of works of historical fiction and poetry: The Fruit of Her Hands: The Story of Shira of Ashkenaz (Pocket, 2009), In the Shadow of the Globe (Lit Pot Press, 2003). She lived in Israel for 15 years (including three weeks in a bomb shelter during the Yom Kippur War) and served as an officer in the Israeli army teaching air force cadets technical English. Michelle lives in New Jersey with her husband and has two grown sons.